Two staff at Our Lady of Peace Hospice share their stories 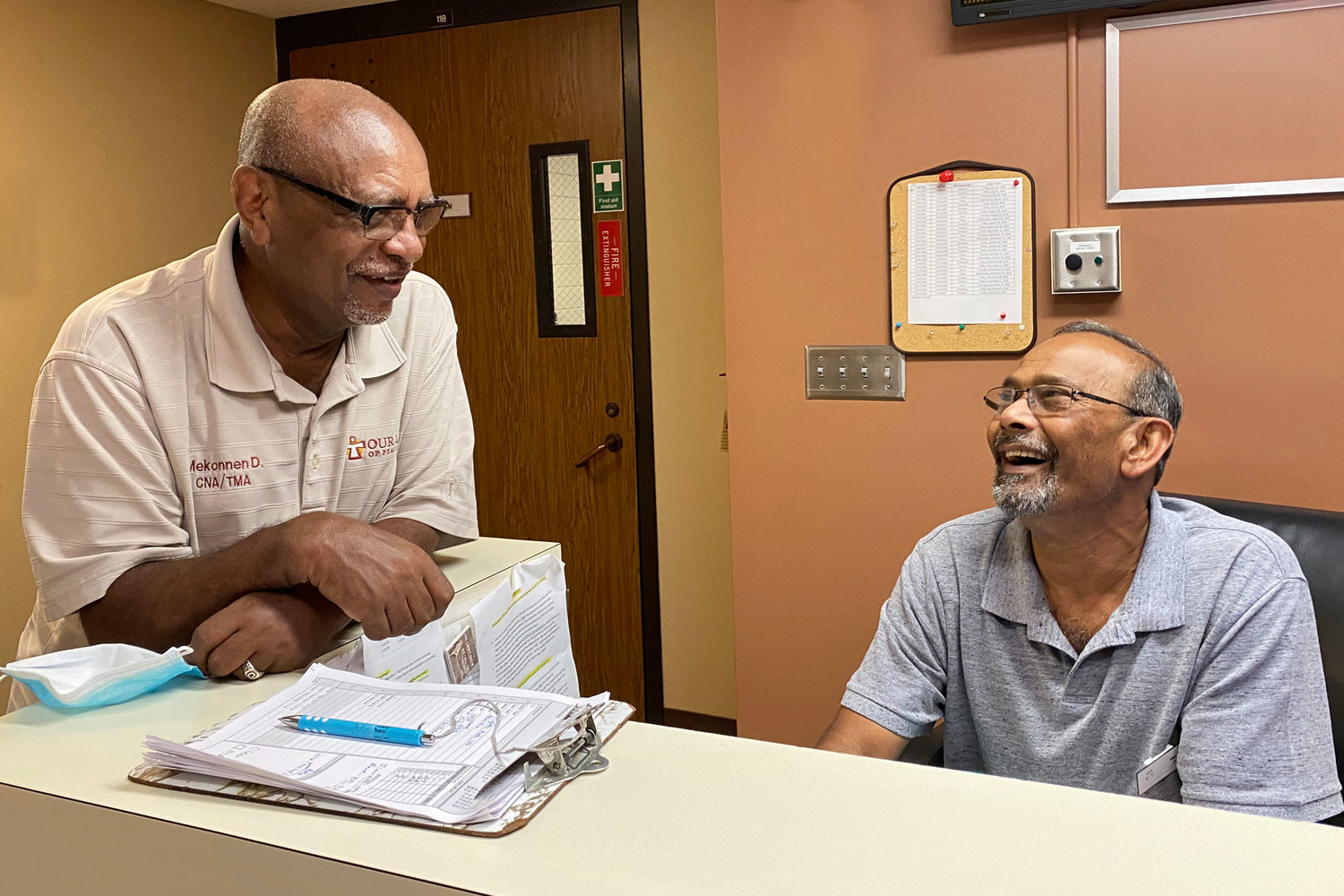 Mekonnen Dori (left) and Hari Pal (right) are longtime employees of Our Lady of Peace Hospice. Both have continued to work fulltime past the usual retirement age. Pondering his own eventual retirement, Mekonnen said, “I don’t know, maybe if Hari retires, then it will be time.” (Photo by Margie O’Loughlin) 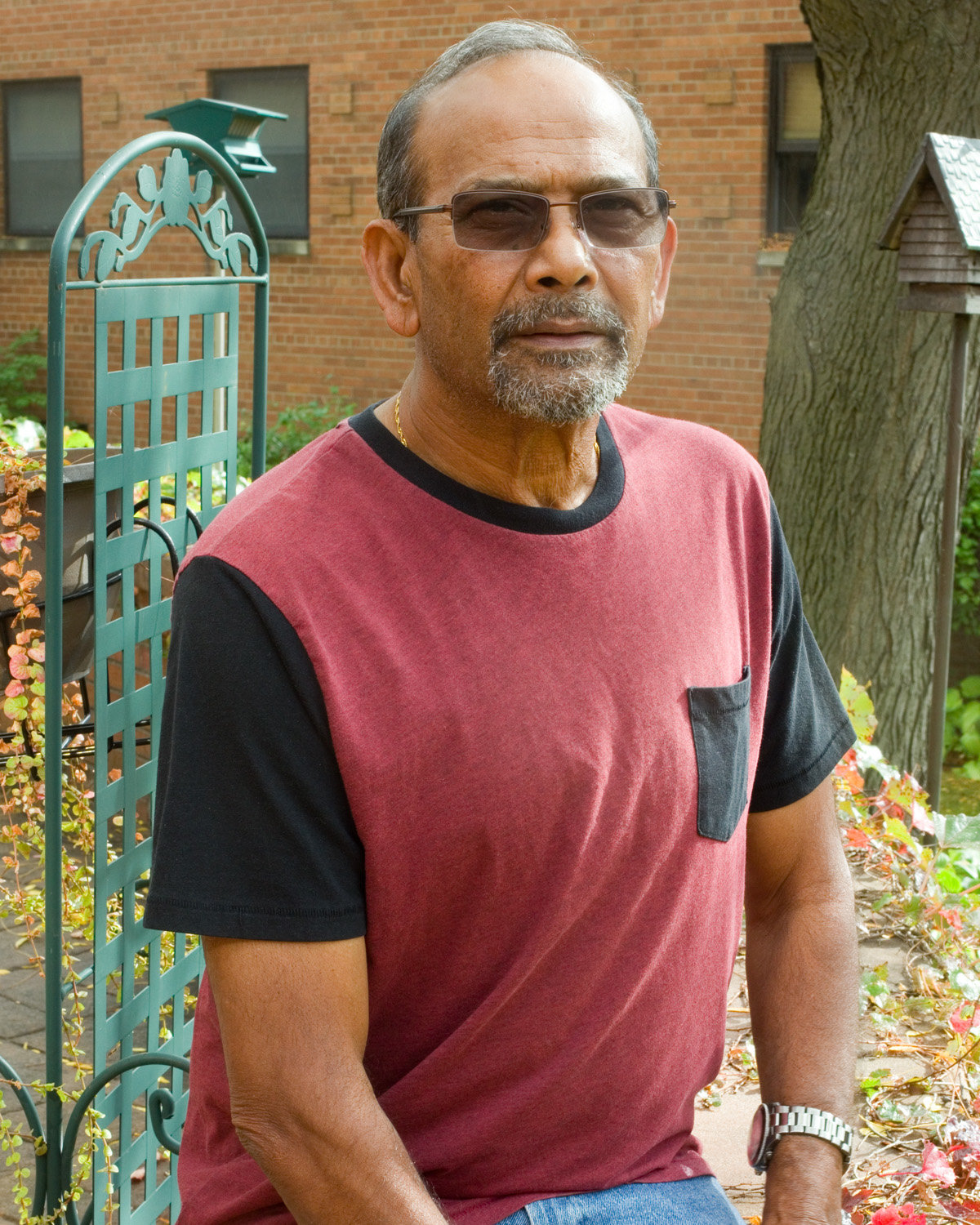 Hari Pal emigrated from the Fiji Islands in 1979. He grew up in a family of 10, and has recreated a sense of strong extended family in 33 years of working at Our Lady of Peace Hospice. (Photo by Margie O’Loughlin) 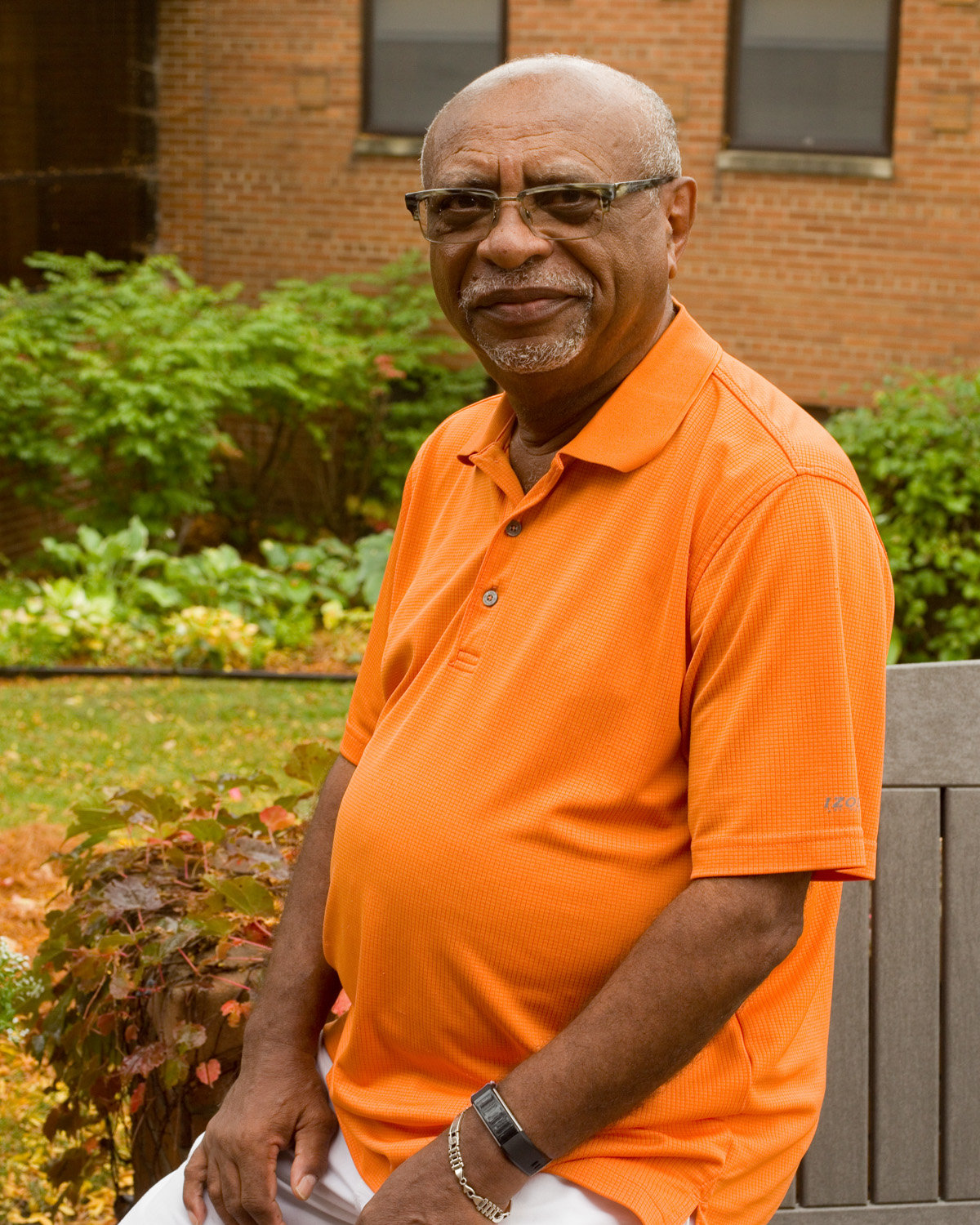 Mekonnen Dori emigrated from Ethiopia in 1999, in a time of deep civil unrest. An early graduate of the Certified Nursing Assistant Training Program at the International Institute of Minnesota, he has worked as a CNA and a TMA ever since. (Photo by Margie O’Loughlin)
Previous Next
Posted Saturday, December 11, 2021 8:13 pm
By MARGIE O’LOUGHLIN

Mekonnen Dori was an elementary school teacher for 25 years in his home country of Ethiopia. An opponent of the military-led communist government there, he spent two years in an Ethiopian jail for his beliefs. After serving his sentence, he knew he had to leave the country.
With passport in hand, Dori went to the border and crossed into Kenya with four of his six children. Because they were so little, the two youngest children were left behind with their grandparents.
Dori explained, “The year was 1998.The older kids and I were placed in a refugee camp in Kenya, where we lived for six months. Many people stayed in the camp for years, but we secured a sponsor fairly quickly and moved on.”
The Dori family came to America in 1999, and settled in St. Paul. Four weeks later, Dori enrolled in the Certified Nursing Assistant Training Program at the International Institute of Minnesota. He has worked as a certified nursing assistant (CNA) and trained medication aide (TMA) ever since.

Formative years
After working at Episcopal Homes for five years, Dori was hired by Our Lady of Peace Hospice in the Merriam Park neighborhood. The hospice facility is unique in that it provides end of life care for all – regardless of ability to pay. Hospice workers often feel a sense of calling to their work, and Dori is no exception.
Describing his upbringing in Ethiopia, he said, “My mother never went to school, but she taught me a lot of things. Most importantly, she taught me to help everybody. My parents raised me in a positive way. One very important thing my mother told me was, “When something bad happens to you, it’s not the end of the world. It may be the beginning. Take things as they come.
“As for working in a hospice setting, death doesn’t scare me. I don’t get benefits from negative thinking. Our staff is here to provide everyday care for our patients. Our top priority is to make sure they aren’t in pain, and that their last days are spent peacefully.”

Seeing through a different lens
Until he came to America, Dori didn’t know what a nursing home or a hospice facility was – they didn’t exist in Ethiopia. He said, “In my country, children are expected to take care of their aging parents. This was a ‘must’ when I was growing up. If there are sons, the responsibility falls first to them and it is seen as a privilege. Ethiopian people are very light-hearted. If someone has two of something, they will give one away. They are generous with their time, as well as their belongings.
“I wasn’t able to care for my parents as they aged, because we had to leave Ethiopia. I’m almost 72 now, and I haven’t even thought about retiring. When I feel that I can no longer come to work, then it will be time to retire. I’ve worked here for 16 years, but that time hasn’t come yet.”

Like extended family
Saying goodbye to a loved one is a daily occurrence in hospice care. Patients enter into hospice when they are believed to have less than six months to live, and sometimes they occupy a hospice bed for only days.
Hari Pal has been a CNA at Our Lady of Peace for 33 years. He left his parents and family behind when he immigrated to America from the Fiji Islands in 1979. Saying goodbye to a loved one is not something he takes lightly.
Pal has a well of empathy for families whose loved ones pass in his care. He said, “Caring for patients makes me feel good. The things I do every day in my work, these are the things I would like to have done for my parents. In a sense, I feel I am paying my dues when I care for our patients here.”
As CNAs, Dori and Pal share many of the responsibilities for patient care: they assist with feeding, bathing, mobility, and all other aspects of daily care giving. In addition, Dori is certified to dispense medications. Pal is able to cut men’s hair. Both say they feel deeply appreciated for the way they interact with patients, which adds to their job satisfaction.

Our Lady of Peace celebrates 80 years
The 80th anniversary of Our Lady of Peace Hospice was celebrated with an outdoor candle light ceremony on Dec. 7. Public relations spokesperson Kari Logan said, “More than 25,000 patients have passed away in the care of Our Lady of Peace staff since the Dominican Sisters of Hawthorne opened the doors on Dec. 7, 1941. Their mission was to serve the poor as their founder, Rose Hawthorne, had done on the streets of New York in the late 1800s.”
Logan continued, “A lot of organizations can’t keep CNAs, especially right now. Mekonnen Dori and Hari Pal’s stories really touched me. For two people to work such a long time for one employer, it’s unheard of. Both of them are loved by their colleagues, and by the patients they serve; they bring their own cultural perspectives and a very strong work ethic to their jobs every day.
“Mekonnen and Hari are good at what they do, and their work brings them joy.”
Our Lady of Peace Hospice is located at 2076 St. Anthony Avenue in St. Paul. Learn more about their hospice services at www.ourladyofpeacemn.org.