• Twenty-two seniors currently studying AP Government and AP Macroeconomics spent a week of March in Washington D.C. The participating students were part of the national Close Up program, which promotes civics education and participation in our democracy with the capital city as a living classroom. Como student highlights included visiting the national monuments, memorials, museums of the Smithsonian, the Supreme Court, Library of Congress, U.S. Capitol, Arlington National Cemetery, the Pentagon 9/11 Memorial, and unique Washington neighborhoods.

Students met with Senator Tina Smith in her office and met Senator Amy Klobuchar in the capitol outside the Democratic Leadership Office near the Senate Chamber. Senator Klobuchar also took the time to show the students the ornately decorated President’s Room in the capitol. 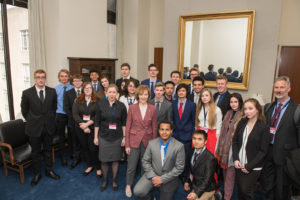 Photo right: Como students participating in the national Close Up Washington D.C. program met with their U.S. Senators during an intense week of study. The Como group is pictured here with Senator Tina Smith in the Hart Senate Office Building. (Photo provided)

While observing the House of Representatives in session from the House Gallery, Como students witnessed discussion and debate of legislative bill H.R. 1, which supports strengthening voter access and reducing the influence of big money in politics. Speaker of the House Nancy Pelosi spoke for 15 minutes which was captivating for the students who have studied her role in government.

Throughout the week, Como students were engaged in policy discussions and simulations with peers from across the nation in workshop groups.

The Close Up closing banquet of 160 students featured six student speakers. Como’s Jamie Cohen was selected to represent her workshop group. She delivered an excellent, reflective and motivating speech received with much applause.

The annual adventure to Washington D.C. for Como AP Government students is made possible through student and school-sponsored fundraising activities, with generous scholarship support from a few individuals of the St. Anthony Park neighborhood and Como area booster organizations.

• Como seniors Theo Lucy, Lexie Harris, and Pa Nhia Vang were selected to receive fellowships from the League of Women Voters. The students were chosen based on their competitive applications which exhibited a strong interest in promoting political participation, working to register voters, and issue advocacy.

The fellows are developing an advocacy project to be implemented this spring with the goal of bringing attention to an issue in their community and meeting with elected officials to address concerns and encourage action. The fellows will also coordinate this year’s voter registration efforts at Como.

The League of Women Voters is non-partisan, neither supporting nor opposing candidates or parties, but always working on vital public issues.

• For eight 11th grade U.S. History students, their award-winning research projects from 1st semester will extend into the spring and the Minnesota State History Day Competition! The following students advanced from their respective categories at the St. Paul Regional History Day and will present their work at the University of Minnesota on May 4:

In the Group Website Category — Maisee Her, Rose Say, and Ly Xiong for the Immigration Act of 1924. Noelia Marin Leal and MaiChue Xiong for Women’s Suffrage in New Zealand. Way Htoo and Shar Too for WAVES (the women’s branch of the U.S. Naval Reserve)

In the Individual Documentary Category, Lisa Saechao qualified for state with her short film on The Hmong Genocide.

Two other Como students earned honorable mention for their entries in the Individual Website category—Eethan Lee for the My Lai Massacre, and Jorge Pliego for Warren Robinett’s “Easter Egg” video game insertion.

• Two teams of students from Como’s AP Economics classes participated in the Urban Regional Econ Challenge at the Federal Reserve Bank in Minneapolis on Mar. 13. The event is administered by the Minnesota Council of Economic Education (MCEE) and sponsored by “The Fed.”

The Como team of Aiyana Aeikens, Naddi Jillo, Khyri Lueben, and Antero Sivula took 2nd place in the overall competition, narrowly falling to Richfield in the Quiz Bowl Final. In addition to the competition, the students enjoyed breakfast and lunch at the Fed and toured the facility, including the cash vault, with Federal Reserve staff.

• Academy of Finance (AOF) sophomore Kalid Ali was selected to participate in the University of Wisconsin Business School’s Business Emerging Leaders (BEL) Program. The summer program at the Madison campus is designed for promising students with strong academic credentials and demonstrated leadership skills.

BEL Program students who are admitted to UW-Madison and complete a business major are granted a full-tuition four-year scholarship. Kalid is excited for his opportunity that will begin this July.

• Como’s Apps Club has been meeting weekly after school to develop a digital application which will serve the deaf and hard of hearing. The goal of the app is to help deaf teenagers effectively communicate with their peers without feeling uncomfortable. The Apps Club will present its app, including business and marketing plans, at the Minneapolis Convention Center on May 11.

• A talented cast and crew performed “The Unusual Suspects” in the Como Auditorium in March. The play, written by Samara Siskind, is a comedy set in a high school revolving around a caper that unites some unlikely students. Como’s adaptation was directed by English teacher Allison Hartzell.