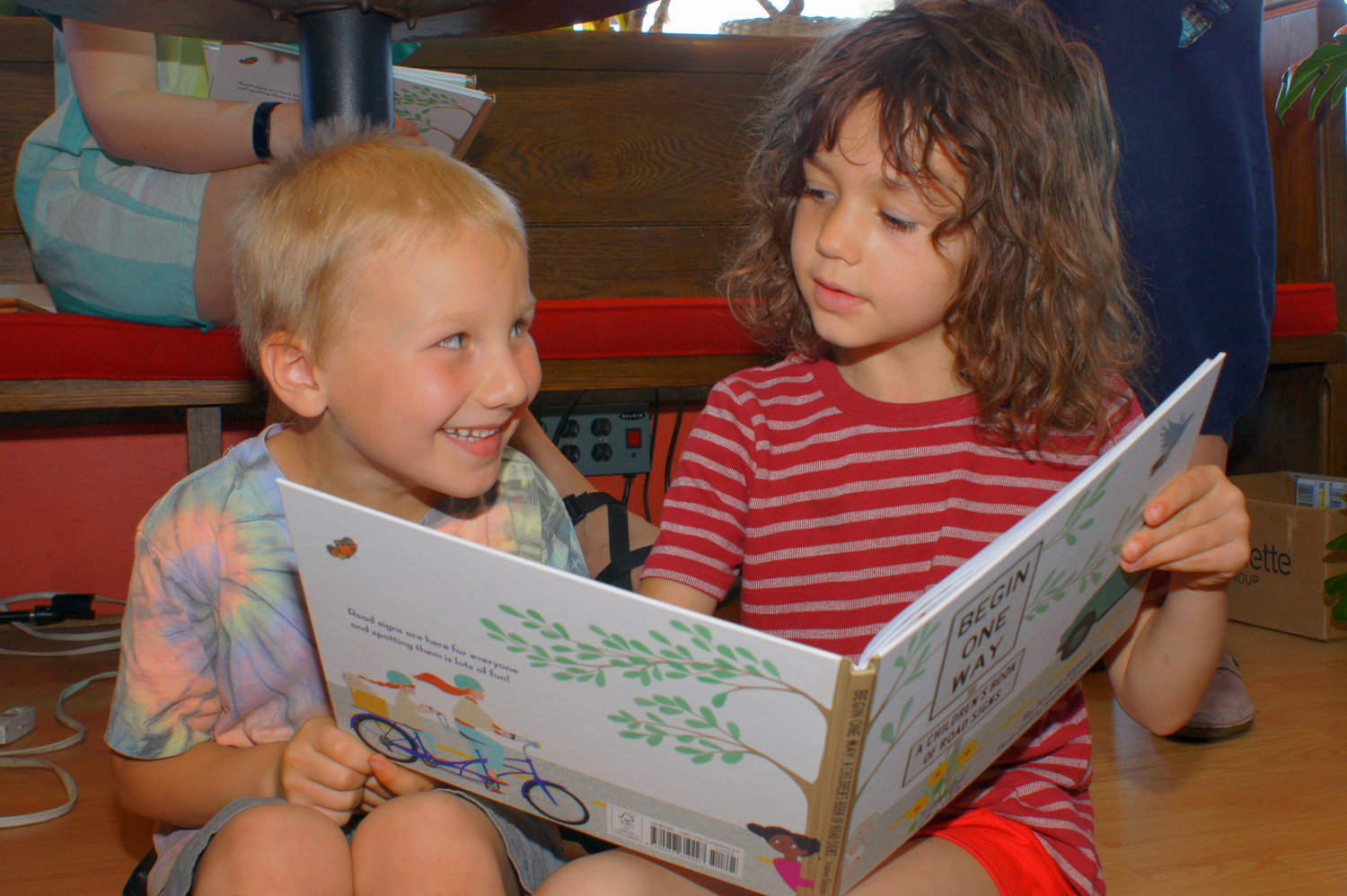 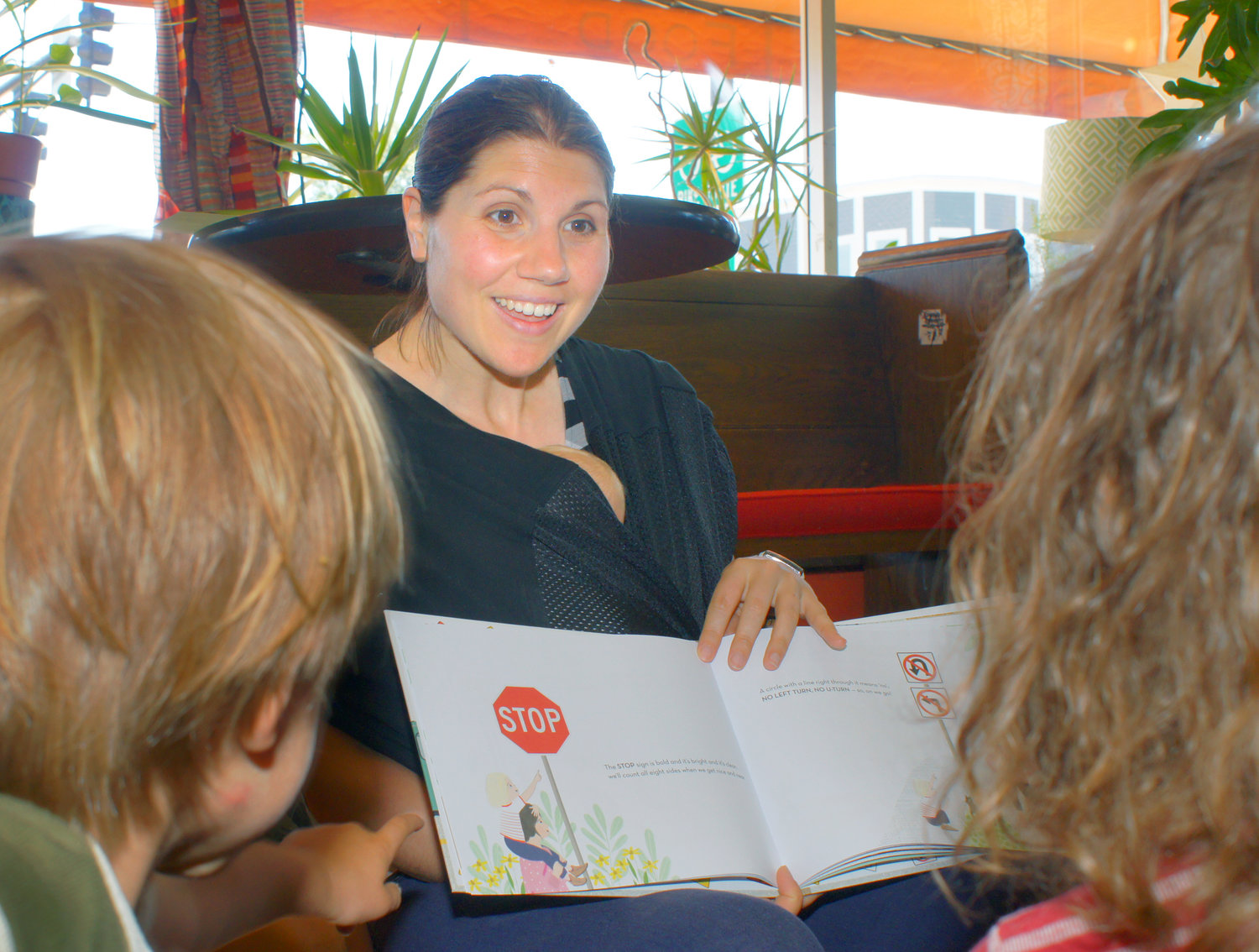 Ioana Stoian presents her new book, “Begin One Way: A Children’s Book of Road Signs at the Gingko Coffee Shop on June 18. When five-year-old son George (aka Biff) was 2.5-years-old, he was curious about traffic signs. Ioana and he went to the Hamline Library and found the only books on traffic signs were published in the 1980s and not very interesting. (Photo by Terry Faust) 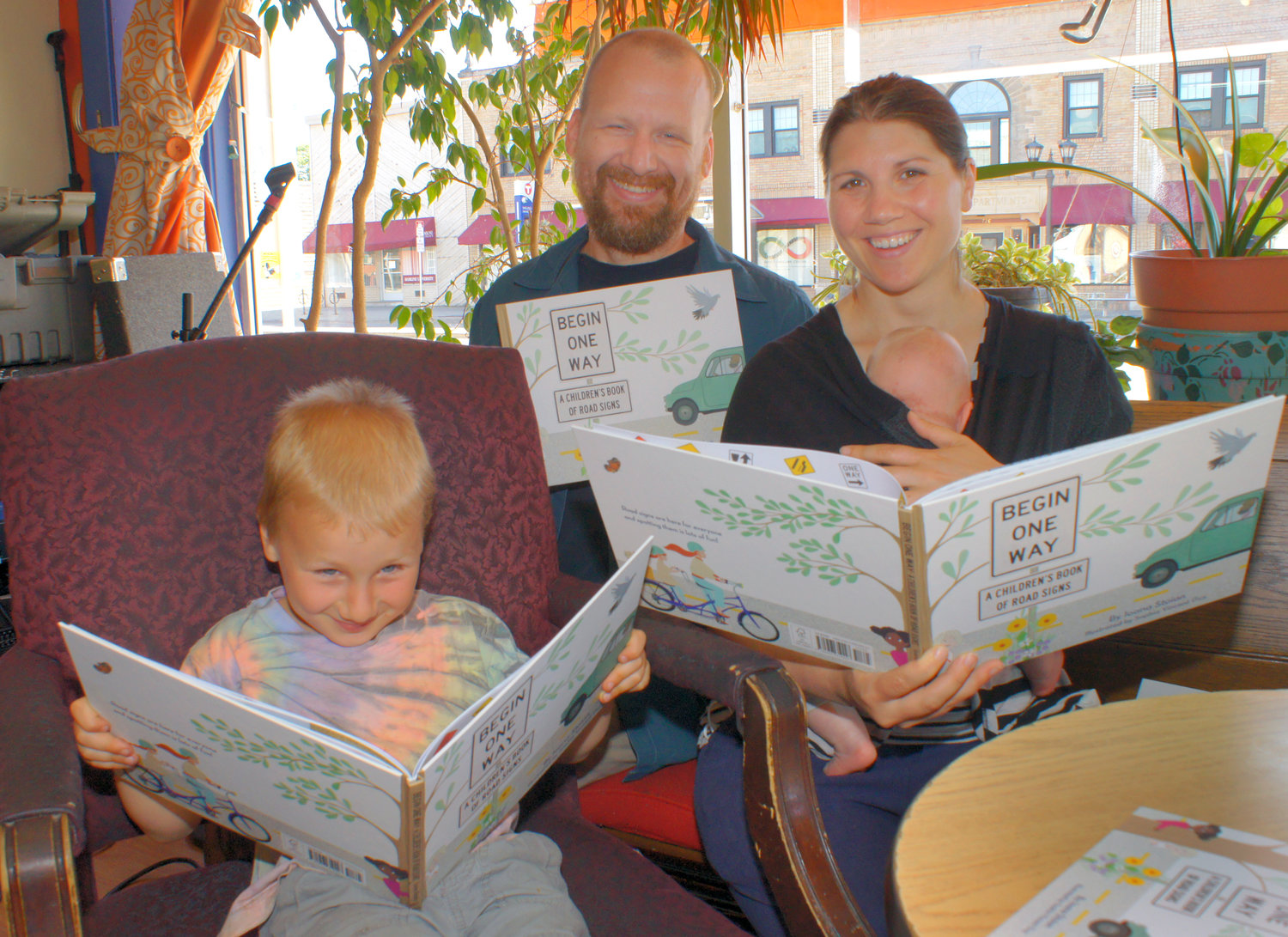 On June 18, Ioana Stoian presented her new book, “Begin One Way: A Children’s Book of Road Signs” at the Gingko Coffee Shop. With her were her husband Eric, 5-year-old son George (aka Biff), and nine-week-old daughter Lydia. (Photo by Terry Faust) 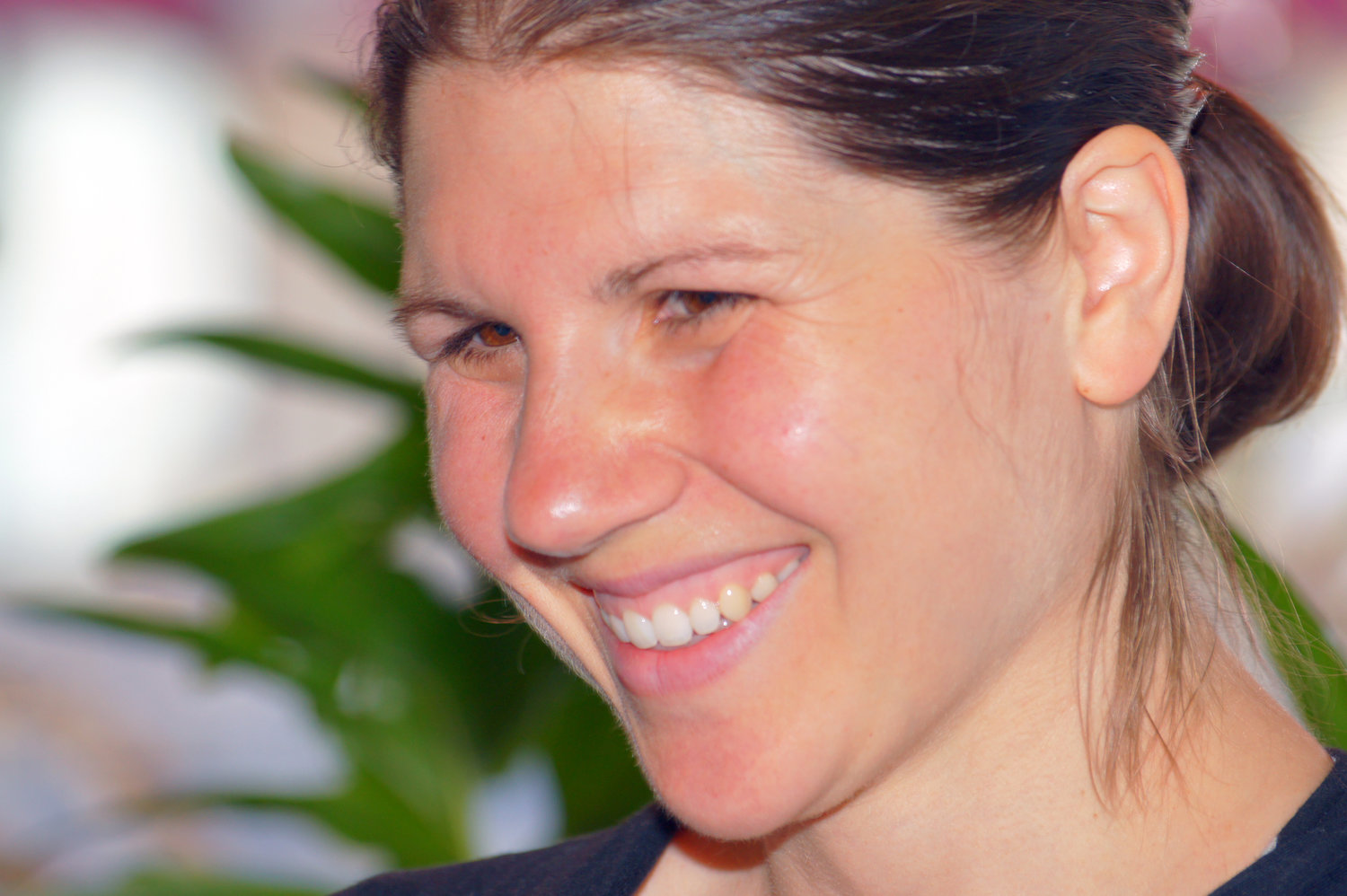 Ioana Stoian presents her new book, “Begin One Way: A Children’s Book of Road Signs at the Gingko Coffee Shop on June 18. When five-year-old son George (aka Biff) was 2.5-years-old, he was curious about traffic signs. Ioana and he went to the Hamline Library and found the only books on traffic signs were published in the 1980s and not very interesting. (Photo by Terry Faust)
Previous Next
Posted Wednesday, July 13, 2022 9:04 pm

When children’s book author Ioana Stoian started taking her two and a half-year-old son, George, on walks to the Hamline-Midway Library, he would stop and point at the different street signs they encountered along the way.
“He became really interested and noticed the signs, so pretty soon it became a game. We would look for what sign came next, and if he could recognize a sign,” Stoian said.
She made little index cards for him, each with a picture of a sign on it. And they looked for books about signs, but had a hard time finding any. The few they did find showed traffic signs from the perspective of a child riding in a car, not walking along the sidewalk.
As George grew older, he and Stoian collaborated on writing information about each sign. The idea for a book was born, and Stoian started writing. She also started searching for an illustrator through the Society of Children’s Book Writers and Illustrators. She chose Sophia Rivers Guy, a Canadian who lives in Israel, to illustrate the book. “Begin One Way: A Children’s Book of Road Signs” was printed and published in Minnesota in June.
“Sophia has an eight-year-old son, so she has been using the book to help him navigate his way to school by himself,” Stoian said. She said she wrote the book, then Guy did the illustrations based on photos she had taken. “We documented our whole actual route,” she added. “When you find a good illustrator who connects with the text, it goes well.”
The text of the book is written in rhyme. “The rhyme just came about, and it felt like a good way for children to remember. Even now, when we cross the road, George recites a bit of rhyme from the book. It’s not learning in a strict way, but easy to remember.
“The walk begins at our little pink house on Edmund Avenue. Then you have the roundabout, which our neighbors plant and tend to. There’s a tractor coming through, which obviously you don’t have on the Midway, but there is a train representing the transit, and one of my favorite librarians is in the book,” Stoian related. She said the Hamline Midway Library is illustrated in its current state. “It’s an historic element from the Midway that was captured in the book, not at all intentionally. But I think it is one of the only books that has an illustration of the library as it is today, before it comes down.”
Stoian said the book conveys the idea of getting children outside, away from screens. “It is about being present with our children and giving them our full attention,” she noted. “I think one of the best ways to do that is to take a walk. You meet neighbors, see dogs, and smell the flowers. I would love for there to be more adults and children walking around their neighborhoods.”
In the back of the book, there is a spread of even more road signs. “People living in the country will have some different road signs, and I hope the book leads to a discussion with your child of what signs you find in your own neighborhood.”
Stoian said as a child growing up in London, she walked a lot. “Almost everybody in London walks,” she said. She and her mother would go to the library, and she had hoped to do the same with her children.
“George and I saw all these signs between our house and the library,” she said. “This is the whole thing. As a mom (to George, who is now 5, and Lydia, 10 weeks), around young children you slow down. They open our eyes to things we don’t even see any more. I have been driving for many years and don’t even notice the signs, but when your two and a half-year-old notices this thing on a pole that has a symbol and wonders what it is, you go back to their pace. They open our eyes to the world we take for granted. That’s what children give us. We are so focused on the destination and not the journey. The whole point of the book is to focus on the journey, stop to talk and play games along the way.”
Stoian said she is a stay-at-home mother, and George (who prefers to be called Biff because that is a construction worker’s name and he currently wants to be a construction worker) is home-schooled. “He has been part of this process of how you make a book,” she said. “We got it printed in Minnesota and distributed in Minnesota, so he has seen it and has been a part of every single step. He is so proud to be in it, and it has been a wonderful family-engaging adventure, helping us through COVID-19.”
This is Stoian’s second chldren’s book. Her first was a board book called “Always Be You.” Her current book is hardcover, and 40 pages long. Stoian already has plans for her next book, which will be about road sweepers. “We follow the crew that comes through twice a year, from the beginning to where the leaves go and what happens at the end. It has been inspired by my 5-year-old, and I look forward to what my little one will inspire.”
She said “Begin One Way: A Children’s Book of Road Signs” is a celebration of the Midway, some of her family and neighbors. It is available wherever books are sold and at local bookstores in Saint Paul.