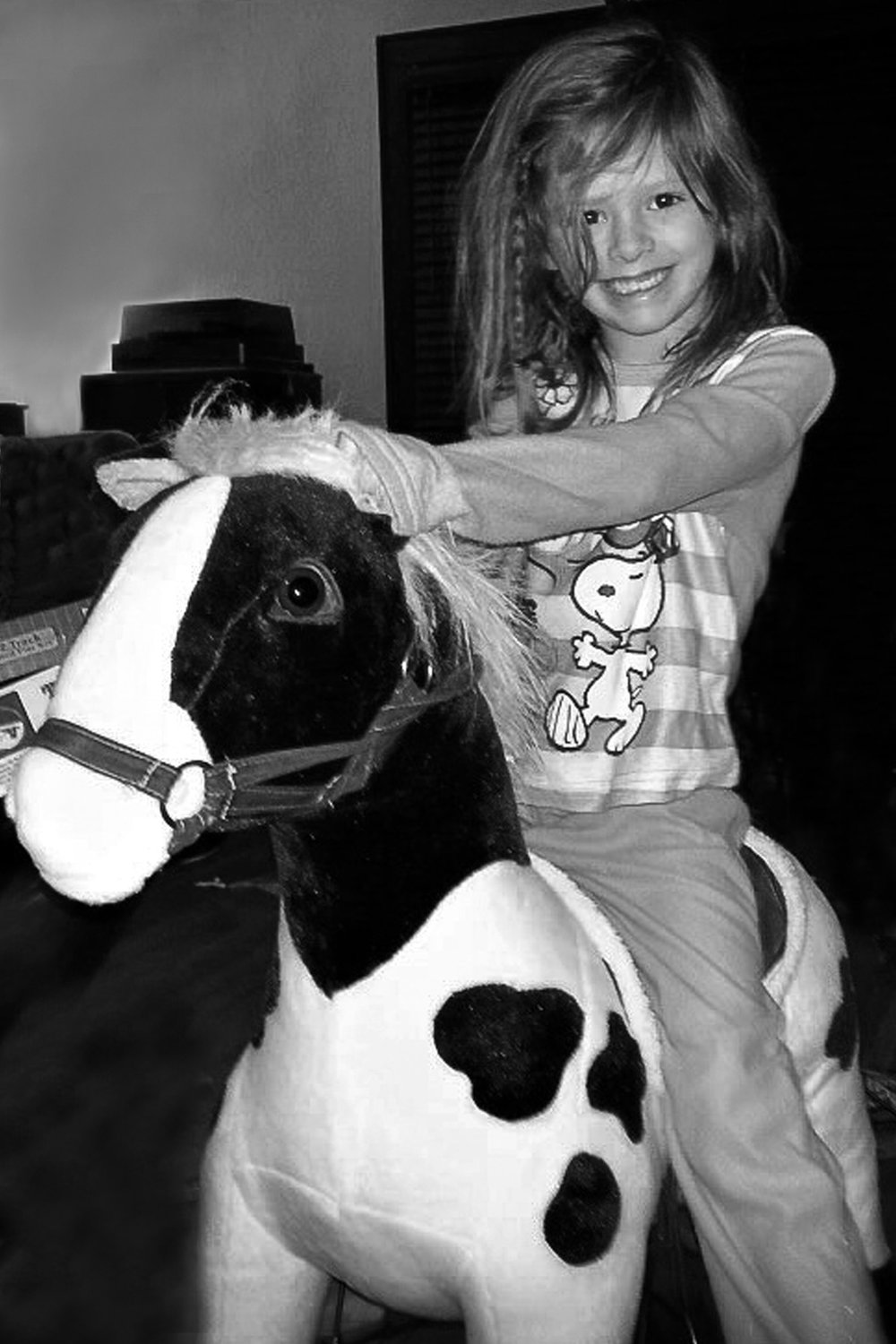 Erin Pavlica’s daughter in 2013, riding the used upholstered horse that became the inspiration for the Midway-Frogtown Exchange. The group offers a place for Midway and Frogtown neighbors to buy, share and barter. (Photo submitted)
Posted Thursday, January 14, 2021 8:56 pm
By MARGIE O’LOUGHLIN

Eight years ago, environmental activist Erin Pavlica was looking for a used, rideable stuffed horse for her young daughter’s Christmas present. These toys are expensive, and Pavlica had no intention of buying one new. She made a post to the Hamline Midway Neighbors Facebook page and connected with someone who had just what she was looking for.
Pavlica is a dedicated zero-waster, thrifter, and re-user of most things needed for her family of six. That stuffed horse got her thinking, “What if there was a buy/sell/barter page just for Midway and Frogtown?” A longtime Midway resident, she has many friends and connections in both neighborhoods.

Connecting neighbors
to neighbors
Midway and Frogtown border each other, separated by Lexington Ave. In setting up the exchange, Pavlica wanted it to beaccessible for everyone whether or not they had a car. The exchange has grown steadily over the years. At last glance, Pavlika said, “There were 427 comments on the holiday gift search page today.”
You name it, and chances are someone else just might have what you want and be willing to pass it along. One person’s trash is another person’s treasure. The site was envisioned as a place to trade goods in the beginning but, Pavlika said, “It’s nice to be able to make a little money these days, and things are priced very reasonably.”
There are certain items not allowed for sale on the site such as baby formula. Items bought with coupons are also not allowed for sale at full price.

Keeping exchanges local
The Facebook group has grown to nearly 5,000 followers of all ages and backgrounds. Due to the size, a new member must be added by an existing member or by one of the two administrators: Erin Pavilka or Chris Miller. A new member’s Facebook profile must indicate that they live in Saint Paul. If a prospective member’s Facebook profile has no residency information, their request will be ignored. An exception can be made for persons working in Midway-Frogtown.
All transactions must take place in the neighborhood, either at the seller’s home or somewhere public.
The physical boundaries for this group run from Transfer Rd. to the west and 35 E to the east; from University Ave. to the south and the Burlington Northern railroad tracks to the north.
Where else can you find a glass top stove for $100? Heirloom ruby red popcorn grown by the seller? High-end, yet fairly priced, costume jewelry for every occasion?
As Pavlika said, “We all have our own circle of stuff, and sometimes we just need to pass it along. Textiles have become one of our worst environmental nightmares. There just aren’t many ways to recycle clothing anymore, so why not pass them on to someone who can use them?”
Pavlika has just completed Ramsey County’s first six-week Recycling Ambassador Program. She said, “I’m a huge zero-waste advocate. It’s a core part of my being. One of my favorite things in life is connecting people to other people, and to things that can be reused or repurposed imaginatively.”