Major league soccer stadium closer to reality in the Midway

Plans for a Major League Soccer stadium and Midway Center redevelopment continue to change as the St. Paul Planning Commission prepares to hear comments on the stadium site plan and master plan for the Midway Center superblock.

The plan goes to the Planning Commission at 8:30am, Fri., June 10 at City Hall. People can also comment online, at https://www.stpaul.gov/departments/planning-economic-development/planning/snelling-midway-redevelopment-site.

The plans will likely get voted on by the commission in July, with an Aug. 3 St. Paul City Council public hearing. Approval would allow stadium work and related infrastructure work to start in earnest. Shopping center redevelopment would take much longer.

The prospect of the superblock lingering continues to worry some community members and many members of the Snelling Midway Community Advisory Committee (CAC). The committee wrapped up its work May 26, sending a detailed report of issues to the Planning Commission. The detailed report was not so much a simple up and down vote for the plans as it was a summary of the committee’s work and a series of recommendations and outline of issues needing further study.

Those issues include parking, traffic, and environmental impacts. CAC members also said they’re willing to meet again if need be.

Minnesota United FC owner Bill McGuire and Midway Center owner Rick Birdoff of RK Midway reviewed the latest plans May 26 with committee members. McGuire outlined what he called the “near term possibilities” for the site when the stadium would open in 2018. Plans showed the stadium taking up a space that would extend into Midway Center, displacing the Rainbow grocery store, Pearle Vision, Home Choice, Midway Pro Bowl, Walgreens and some vacant mall space.

The rest of the center would remain in place. So too would McDonald’s and Perkins restaurants. A green space anticipated to extend from the stadium to University would instead end south of the restaurants. But the building Big Top Liquors occupies would be gone. The former American Bank building would remain. What is described as temporary parking would be along Snelling, with a lot at Pascal St. and St. Anthony Ave. Much existing Midway Center parking would remain.

Birdoff said he cannot discuss lease details that affect when and where businesses move. Some businesses could opt to move to vacant spaces within the center. Others could leave. He dismissed the notion that shopping center space would remain empty, calling it “economic suicide” to reduce the center by 150,000 feet and not add new space.

Ambitious plans unveiled earlier this year called for mixed-use redevelopment, with high-rise office-retail buildings along Snelling Ave. housing at Snelling and Pascal St., and hotel space near Pascal and St. Anthony Ave.. Much of the site would be mixed use, with parking ramps built inside the buildings.

“What’s the incentive or urgency to move forward after the stadium is built?” said Eric Molho, committee co-chairman. He said the shopping center has been its current condition “for a very, very long time.” Birdoff responded by noting that some spaces have specifically been left vacant because redevelopment is coming.

“Everyone understands that no one wants the center to stay this way,” said CAC member Kirk Wythers. He asked if the city could limit how long spaces would be left vacant and used for parking, but timing is something the city doesn’t regulate.

The timing of Midway Center redevelopment is just one of a number of issues the CAC is raising in its report. The report outlines concerns ranging from the upcoming environmental impact studies to how the success of redevelopment can be measured. Committee members debated how specific the report should be, especially in the comments about affordable housing.

Property tax impacts that could be tied to redevelopment were another concern. Several committee members called the report “aspirational” and wanted to see measures in the report taken to ensure high-density, high-quality redevelopment. Others questioned how redevelopment could impact gentrification.

Some issues, such as a desire to see more minority-owned businesses as part of a redeveloped Midway Center, are beyond what a master plan can impact. One repeated comment May 26 is that there are issues that are beyond the control of a master plan, as the plans regulate land use and density.

As the Monitor went to press, Gov. Mark Dayton pocket vetoed a tax bill adopted May 22 by the Legislature because of, he said,  an error in the bill. A property tax exemption for the stadium property was included in that bill, but the requested sales tax break on construction materials was not. A liquor license was approved under separate legislation and signed by the governor.

ILLUSTRATION BELOW: The current site plan shows how the new soccer stadium will incorporate itself into the superblock while the owner of the Midway Stadium property, RK Midway, considers its plans for redesign of its property. The plan shows the removal of what is now the Rainbow grocery store, Pearle Vision, Home Choice, Midway Pro Bowl, Walgreens and some vacant mall space. The building currently occupied by Big Top Liquor would also be torn down. There will be temporary parking of approximately 220 spaces to the west of the stadium divided by an in/out street. Outlot buildings will remain on University’s south side, as will the rest of the current mall. Some parking spaces at the mall will be lost to a green space that goes partway toward University Ave. One of the concerns of the Snelling Midway Community Advisory Committee (CAC) was that there is no timeline for the future development of the balance of the superblock. 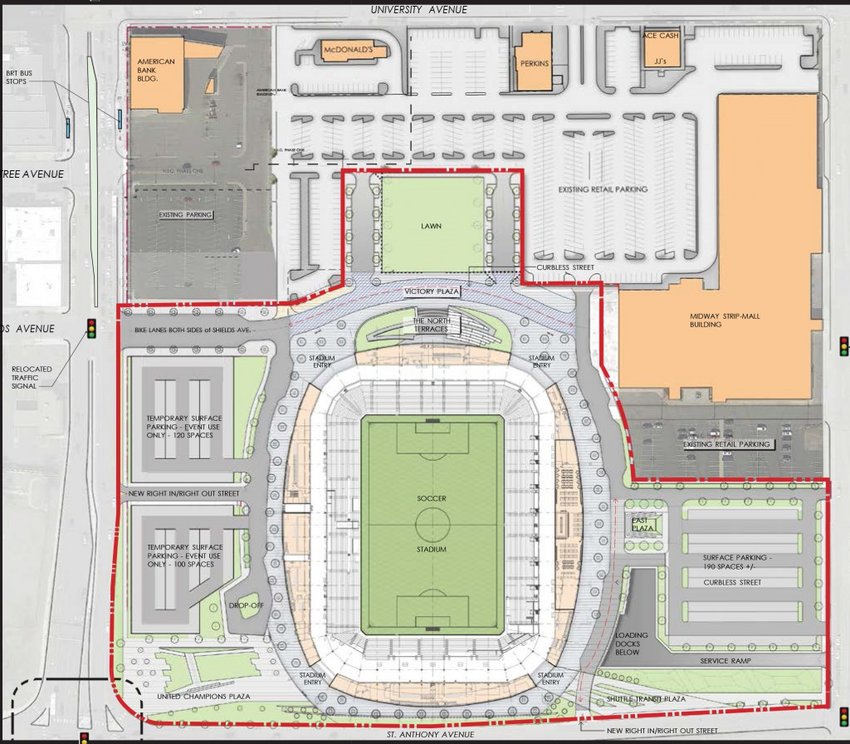