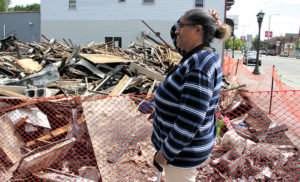 Midway resident Beverly Jones has bought medicine at Lloyd’s Pharmacy since the 1970s, when they delivered to her home. A few of her kids worked there, as well. “This is a death here, it really is,” she said on Friday, May 29 as she looked over the damage. (Photo by Tesha M. Christensen)

The Hamline Midway community is mourning the loss of the 102-year-old pharmacy at the corner of Snelling and Minnehaha that burned to the ground on Friday morning, May 29, 2020.

It was part of rioting and looting following the murder of George Floyd by Minneapolis police officers earlier in the week. In the Midway, Big Top Liquors, Bole Ethiopian/Napa, Sports Dome, Footlocker and Great Clips were also destroyed by fire. About 170 businesses in the Midway and 530 overall in the Twin Cities were looted causing as estimated $500 million in damages. An estimated 67 were destroyed by fire, with the majority of those in the area covered by the Monitor’s sister newspaper, the Longfellow Nokomis Messenger.

Lloyd’s Pharmacy and the Menopause Center owner Jim Stage plans to rebuild, spurred on by the wish of the community. Right now, customers from Lloyd’s are being served by Setzer’s Pharmacy in Roseville (1685 Rice St., 651-488-0251). They’re also seeing customers from other pharmacies that were damaged.

Lloyd’s to set up temporary location in Midway

Stage also owns Setzer’s, and was among the 20 staff members from Lloyd’s and Setzer’s working out of that location on Thursday, June 4 when he spoke with the Monitor via phone. Unfortunately, with the loss of the compounding lab on the second floor of Lloyd’s, pharmacists are not able to do any compounding right now, according to Stage. Customers using this service came from across Minnesota and Wisconsin.

He is working to set up a temporary location in the Midway for Lloyd’s and hopes to have that up and running soon. He was waiting for his computer records system to be recreated on Thursday, but pointed out that his longtime staff know their customers so well that they were working with them to fill orders earlier in the week. 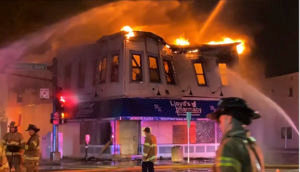 Firefighters were called at about 10 p.m. on Thursday, May 28 to the corner of Minnehaha and Snelling, but weren’t able to save the building. Owner Jim Stage plans to rebuild, but estimates it will take one year. (Photo by Rich Trout )

It started as a regular day on Thursday, May 28. Stage had bought the staff lunch from Checkerboard Pizza, and while picking it up the staff member saw CVS Pharmacy being looted across the street.

He returned to the pharmacy, alerted Stage, and they began locking the door between customers. At 3:15, they made the decision to close for the day. In hindsight, Stage wishes they would have grabbed the server and other items. The Menopause Center staff member at the back of the building also left.

At about 4:30 p.m., people began to break in and loot the store. Based on surveillance footage, Stage estimates that 100-150 people vandalized the store.

“The police never came,” Stage said. “That still baffles me. There was no help. They had to protect Alliance Field and all the big things, I guess.”

Stage didn’t realize how badly the building was damaged until Friday morning at 7 a.m. The fire department had leveled the building in so that the fire didn’t spread. Up until then, Stage had thought they could fix the existing structure.

“When I drove up to it on Friday morning, I was pretty devastated,” said Stage. A week later, Stage views the complete destruction as “almost a relief from God. We would have probably had to rebuild the whole main level and might have needed to go anyway.”

Stage doesn’t know who set the fire or why.

“It doesn’t matter the reason,” said Stage. “We forgive the people who did it.”

At first, he wondered what to do next, and he’s been buoyed up by the care and concern members of the community have shown. They’ve told him how much the pharmacy means to them and that they don’t want it to go away, but are pushing him to rebuild.

A GoFundMe page had raised over $100,000 as of press time. “The community has been great,” said Stage. “It’s really amazing to me, my wife and our five kids. With God’s help, we’ll be able to do it. We know it is a tall order.”

Stage has also been encouraged by his staff of just under 40 people, who want to continue working at Lloyd’s and have risen up to help figure out details for customers despite the loss of records immediately after the fire.

“It’s a beautiful thing. That’s what encourages me,” said Stage. “I was devastated, but my employees have shown the resolve and so many people want the pharmacy rebuilt. It inspires me and gives me motivation.” 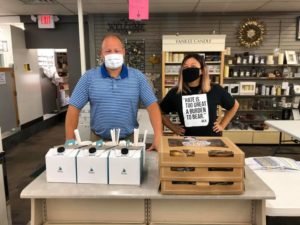 Ward 4 City Council Member Mitra Jalali visited Lloyd’s Pharmacy owner Jim Stage and his hardworking staff on June 3 at their sister location, Setzer’s on Rice Street, with donuts and coffee for the team that works long hours to help impacted customers still get medications. “The loss of Lloyd’s has been nothing short of tragic to our Midway neighborhood, but they’re planning a pop-up location nearby their old spot in the coming weeks, and will also be working on a public art memorial for their beloved Snelling location lost to fire. My heart goes out to the entire team at Lloyd’s, and we’ll keep working with you to support your rebuilding in any way possible,” said Jalali. “Our community will continue to show up for you, just like you have for us for decades.” (Photo courtesy of Mitra Jalali)

Stage grew up in the Midway and graduated from Concordia Academy in Roseville class of 2000. His uncle suggested he might enjoy a career in pharmacy because he liked science and math, so he tried it out and agreed. He earned his degree from North Dakota State University and interned at Lloyd’s. His first job was at CVS as there wasn’t an opening at Lloyd’s, but after two years Lloyd’s owner Ron Johnson called him up and asked if he’d like to work as a pharmacist at his Rochester location. Stage moved the family down and worked at Hunt’s Pharmacy for three years, but he wanted to return to the Midway area.

“I learned a lot about independent pharmacies,” Stage recalled, and he realized he wanted to own and operate his own. When a position opened up at Lloyd’s in December 2011, he returned.

In 2014, at age 33, Stage purchased the pharmacy and its building. Much of running the business has been learned as he goes. “If you wait until you’re ready, you’ll never do it,” Stage observed.

He bought Setzer’s in Roseville from Gary Raines in 2017. The two stores have operated independently. He also owned Schneider Drug off University but sold it to CVS last year.

It’s a tough time for independent pharmacies, according to Stage, because of Pharmacist Benefit Managers (PBR). “They’ve been brutal to us,” Stage said. “They manipulate the market.”

Pharmacies are punished if customers don’t refill their prescriptions on time and money they were paid is pulled back, so a business owner never fully knows what their income will be, he explained.

Because of its compounding work, Lloyd’s income has been steadier. The store serves 8,000 people, and about 15% of the work is compounding.

“The goal is to serve the community, and get back into business and fill people’s prescriptions that are needed on a daily basis,” said Stage. “As a business owner, I’m just called to forgive. I’m thankful no one was hurt and we can move on.”