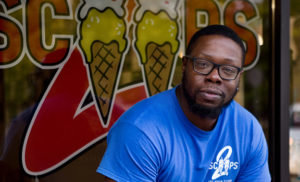 Brian White Jr, one of four co-owners of 2 Scoops Ice Cream Eatery at 921 Selby Avenue. His family was able to open their business by pooling resources and being creative. (Photo by Margie O’Loughlin)[/caption]

Standing on the corner of Selby Ave. and Milton St. with Brian White, Jr., it seems like he knows everybody. Whether passersby are driving or walking, they smile and wave – and he waves back.

White grew up in Frogtown, and spent formative years playing football at the West Minnehaha Recreation Center. He is no stranger to this neighborhood. Now co-owner of 2 Scoops Ice Cream Eatery along with his mother, father, and aunt, he said, “When we got the idea to start our business, we knew we wanted to be part of this community – not just do business in this community.”

The family-owned and operated business is doing just that. They had hoped to open in April but because of COVID, Grand Opening Day was delayed until May 30. On the Saturday of the uprising that rocked the Twin Cities and the world, lines had formed down both Selby and Milton while customers waited patiently for their cones. White said, “We thought it might be rough, but we also know ice cream is a universal goodness. People needed to lift their spirits, and they really came out to support us.”

2 Scoops occupies the space that housed Golden Thyme Coffee and Café for many years. The café has moved just a few doors away, and the block on Selby Ave. between Milton and Chatsworth streets now boasts six African-American owned businesses. If it looks like a resurgence of the old Rondo neighborhood that stood until Interstate 94 barreled through, that’s because it is.

White has a lot to say about being an African American entrepreneur in this time and place. He said, “At 2 Scoops, we have a real affinity for youth. We love that African American families bring their kids in to see what’s possible. Last month, a non-profit called Male Mentors came with a van full of young men. I told them, ‘Look, you’re probably not going to grow up to be professional basketball players. Why don’t you think about running your own businesses instead?”’

He calls this, “speaking an idea into existence.”

Others donate so kids can have free cones

On Opening Day, John Becker, who owns a State Farm business across the street from 2 Scoops dropped off a $100 check. He said he wanted to earmark it for kids who might not be able to afford an ice cream cone this summer. White is responsible for social media postings and put word of Becker’s gift up on the company Facebook page. They were flooded with donations from as far away as Michigan. More than 1,000 children under 12 have been given free ice cream cones so far, and the donations keep coming in.

In addition to all this, 2 Scoops has developed a reputation for excellent customer service. White said, “Our summer staff consisted of mostly neighborhood high school students. For many of them, it was their first real job. A lot of kids these days don’t have the best interpersonal skills, because they spend so much time on computer screens. It was great seeing them mature over the summer: they quickly learned how to step out from behind the computer screen, look customers in the eye, and be gracious.”

There are other youth-focused initiatives in the works, as well. White coordinates partnerships with several nearby elementary schools including Galtier, JJ Hill, and Adams Spanish Immersion. When students meet their reading goals, they are eligible for an ice cream cone to celebrate.

A future dream is to develop, “Two Scoops Hoops:” a sponsorship program for boys and girls youth basketball in the neighborhood.

Visit www.2scoopseatery.com for business hours and menu options. They are also available for catering.

How will homeless weather winter?