LEARNING TO GIVE BACK 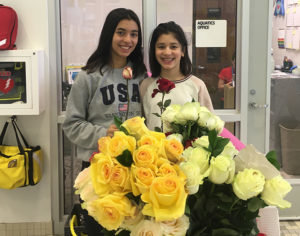 For the past four years, Joseph Lallier, a junior at Eagan High School, organized with Eagan Sam’s Club to collect roses not sold on Valentine Day and give out to the community.

Satya and Rosanna Mamdani wanted to get involved in bring a little smile to people in their community. They asked if they could pass out roses at the Midway YMCA.

After they pass out roses at the Midway YMCA, the group went on to reach out to about 1,000 people by delivering them to 11 Senior Centers, police, fire and five schools.

People receiving a rose from either Satya or Rosanna could not believe that these girl took the time to give back to their community in this very special way of kindness. 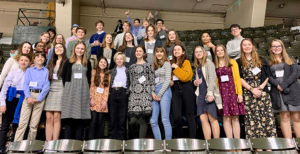 Murray students get ready to board the bus to the Minnesota State Fair’s Rose & Lee Warner Coliseum where the Twin Cities Regional Science Fair was held Feb. 28, 2020. The State Science Fair will be held at Benilde - St. Margaret’s School, St. Louis Park March 26-28, 2020. Chittra Xiong (Senior) has submitted a research paper, “Formation of Nanopores in a Polymer Monolith Through Cleavage of Bulky Side-Groups” and qualified for the Junior Science and Humanities Symposia (JSHS) Program. (Photo submitted)

Database of mass shooters released for public use

The Violence Project, a nonpartisan think tank has released the largest, most comprehensive database of mass shooters in the United States.

This new database, funded by the National Institute of Justice, the research arm of the U.S. Department of Justice, was developed by professors Jillian Peterson and James Densley and a team of students at Hamline University in St. Paul, Minn. It includes 171 mass shooters from 1966 to 2019, each coded on 100 pieces of life history information. The entire database is downloadable for free at www.theviolenceproject.org.

“Mass shootings are a complex issue, requiring multiple avenues of prevention,” says Dr. Jillian Peterson, “The goal of this project is to ground our public policy discussions in data and develop evidence-based policies to prevent these tragedies.”

The mass shooters in the database each shot and killed four or more people in a public space, including schools and houses of worship. They are 98% male and 52% white, with an average age of 34.

This is also the first database to look closely at how many shooters obtained their guns. The majority of mass shooters use handguns (77%) and 25% used assault rifles. Of the known data, 77% of shooters purchased at least some of their guns legally, 13% made illegal purchases, and 19% stole guns.

Get to know local organizations