A conversation with the Truce Center’s Miki Lewis 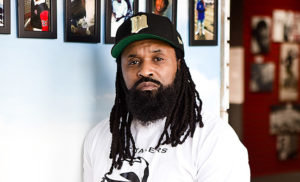 Miki Lewis is the founder and director of the Truce Center in St. Paul. (Photo by Margie O’Loughlin)[/caption]

The first time Summit University resident Miki Lewis saw George Floyd he thought, “Now, there’s a big guy. Being from African American neighborhoods, a lot of us come up thinking we have to show aggression – but George was different. He was very peaceful.”

Lewis explained, “We met in truck driving school in 2017, when George had been in Minneapolis for a couple of years. We naturally gravitated toward each other, and got to be friends.

“We were together for three months in training. I learned a lot about George in a short period of time. He was from Houston. He came to Minnesota for a fresh start. We both completed the training, and saw each other a few times after that. I hadn’t seen George in five months prior to this happening. When I learned about it on Facebook, I couldn’t believe it.”

Lewis continued, “For a lot of us, it’s the way George was killed that is fueling the anger right now. We’ve seen officers shoot us over and over again. To a certain extent, we’ve gotten desensitized to shooting. In the eyes of our community, it was the level of non-compassion that we saw in the killing. That officer just tucked his hand in his pocket and looked down on George as if he were nothing.”

Lewis runs a non-violence initiative in the Summit University neighborhood called the Truce Center, and he is no stranger to violence himself. He said, “I’ve been stabbed, I’ve been shot, I’ve been homeless, I’ve been hungry, I’ve been cold.”

Out of these hard times, Lewis emerged with a strong faith and a commitment to assist in making the world a more peaceful place. It can often feel like an uphill battle, but Lewis presses on. He said, “I’m not scared anymore because, unfortunately, I’ve gotten used to this. There will be another unarmed black man murdered by a white officer, that’s no secret. We have a president who is inciting racial differences among us: I believe he’s trying to fuel further division, to fuel a race war. That divide is being driven even harder as time goes on. It seems like the divide is growing bigger, not smaller.”

The work at the Truce Center is to help young people develop a positive sense of self through learning African American history and conflict resolution skills.

Lewis explained, “If there’s a kid being taught since he’s little that you don’t like or tolerate certain kinds of people, and that kid grows up to be an adult who acts like that. Is it his fault? Is it his parents’ fault? Is it society’s fault? The only thing we can do is to try and educate each other about our pasts, and to try and develop empathy for what we’ve been through.”

He continued, “You can feel the energy in the air right now; racism is really coming out of the closet. It’s becoming more blatant than it has ever been before, but we can’t continue to divide ourselves as human beings. We will rebuild our cities. I guess we’ll see if the change comes then. We see what this divide has done to us.

Lewis concluded, “It’s critically important for white people to open their mouths and say when things are wrong and not fair, to stop keeping a closed mouth to the racial injustices happening around them. Somehow or other, we’re all going to have to come together.”