FORM: THERE TO HOLD YOUR HAND

Community of support for parents 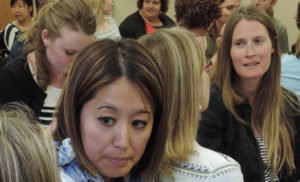 Infants and toddlers come to this world as whole beings, and they should be afforded the same respect and consideration that another person would have.

That is the basis of respectful parenting, according to Kelly Scott, an associate for Resources for Infant Educators (RIE).

“We don’t mean deference, that the child is in charge,” she explained. “By respect, we meant that children have a point of view, that they can be active participants in their care.”

“What they need for the first three years of their life is for a social and emotional foundation to be built,” she continued. Scott, the parent of a young girl, is formerly from California and now spends her time between Chicago and Minneapolis. She joined Carolyn Paetzel recently to talk about their experiences with the RIE form of parenting.

Paetzel, a licensed educator, parent and RIE associate, is the founder of Friends of RIE Minnesota (FORM), which she started in 2014. “We started with a group of four, and now people in 23 different countries follow us online.”

The group meets monthly for discussion, drawing parents, educators, school administrators and counselors to St. Paul. The group meets at different locations, such as homes or libraries, in St. Paul. There are play groups for children monthly. People also participate on Instagram.

Paetzel explained that RIE focuses on children from infancy to two years old, but said the respectful parenting program can go all the way on the continuum to cover adults and relationships in general. There is usually a presenter at the monthly FORM discussion group. For example, recently a Hamline University developmental psychologist talked about raising boys in today’s society. “We had a full house,” Paetzel said.

She stated the mission of FORM: “We are an open forum for collaborative inquiry, dialogue and advocacy influenced by Magda Gerber’s ‘Educaring Approach’ in Minnesota.”

Gerber taught respectful parenting in the terms of a stoplight. As described in a recollection of Gerber’s work, “When a child can handle the situation, the light is green and the adult does not need to intervene. If the child’s behavior will put themselves or another person in danger, or is socially inappropriate, (a red light situation) then the adult will intervene to prevent anyone from getting hurt or to explain why something is not okay. This is done in a calm, non-judgmental way. It might also include physically blocking the child from causing harm.

“When there is a situation where the child may not be able to manage on their own, the adult can respond to this as an amber light situation. The adult would come close to observe the situation, and be ready to act.”

She said parents can see what young children can do for themselves, and not anticipate their needs before they have a chance to tell what they are.

“Sometimes RIE families can look different from a conventional family. There is a lot of emphasis for children to develop gross motor skills on their own without intervention, so there is not as much modifying what they are doing. They are given a space they can freely explore, where a grownup is very comfortable with the environment and does not really intervene,” noted Scott. “We will let them dress themselves sooner or make choices sooner than in a conventional way.” 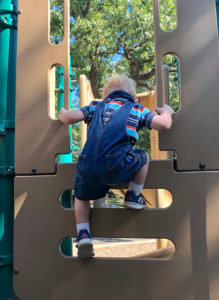 RIE stresses freedom of movement along with freedom of emotion for children. (Photo submitted)

Paetzel added that along with freedom of movement, there is freedom of emotion. “So we wouldn’t stop a child from crying, but acknowledge their crying and support them,” she said. “You fell down. Acknowledge what happened. That is sometimes all that is needed.”

Scott discussed the number and types of toys that children may need. “If children have a lot of toys that are single-use, such as pressing a button and the toy does one thing, children do not stay in interaction with those toys very long,” Scott said. “And they don’t treat those toys as gently.”

She said if you think of a child on a hike, that child may find a stick and find 15 things to do with it as the walk continues.

Talk to your very young child

“The child can participate with what’s happening,” she said. “When we speed up, the child can’t come along. Respectful care is considering children in the choices we are making, considering them in what we are doing to them, telling them what we are going to be doing so they can participate.” Scott noted that a small infant can move its legs up to get a diaper off, for example. “We will talk with them, there is nothing to rush through; we are looking at bonding and attachment that warm, responsive care brings.”

Paetzel said Gerber had described the relationship between the child and his or her caregiver as two teenagers doing an awkward dance. Eventually the caregiver and child, like the teenagers, learn to be in rhythm together.

Scott added that speaking to the child in proper cadence and tone and full sentences helps him or her with language development and becoming highly verbal.

“We are all looking for community,” Scott said. “Everyone wants to do their best and be around people who are championing them and making them feel secure in their choices. FORM is a great place to come and find empathetic parents who understand what you’re going through. Everyone is trying to find this more peaceful way of being with each other. There is a lot of wonderful information online, but there is still something wonderful about being together, and that is what FORM provides.”

Paetzel added, “So often friendships form that remain until the kids go away to college. Someone is there to hold your hand when you need one.

“FORM is not a group that is exclusive,” she continued. “One of our mottos is ‘Come as you are whenever you can.’ We never charge for anything so it’s open and accessible for everyone. Everybody’s welcome.”

Reflections from parents and educators

Annie Pezalla is a parent of twin six-year-old boys, Jackson and Owen. “I have been greatly helped in my parenting through FORM. I have been plugged in to this organization almost since the boys’ first birthday. Jackson and Owen were born here in Minnesota, but when they were just a few months old, we moved to Seattle for my husband’s job. We were completely uprooted, and I felt lonely and overwhelmed with the challenge of parenting twin babies without the support network I had back in Minnesota.”

Pezalla started to read newsletters from FORM forwarded to her by her older sister and quickly became a member in her own right, reading anything she could get her hands on. “FORM has helped me to be a better parent. It combines evidence-based practice on early childhood development with a down-to-earth, compassionate, curious, playful approach to learning about kids.”

“In the midst of some really challenging parenting moments for me – one of my boys had a ‘biting phase’ which was pretty alarming; another one of my boys had some digestive issues which had me completely perplexed – FORM has been a savior. I’ve learned great lessons about how to care for my kids and myself through FORM.”

Pezalla is also a professor of human development and family studies who earned her doctorate at Penn State. “I am so grateful for my education there, which has given me a strong foundation upon which to understand development. Yet FORM has brought about a new layer of color and light to my education. It’s given me a more humanistic understanding of the wonders of child development.”

Pezalla has presented twice at FORM, once on the importance of nature-based free play in early childhood, and another time on healthy emotional expressions in young boys. “Both sessions were a joy for me.”

Nicollete DeVall is a long-time member of FORM and early childhood and family education instructor.

“I absolutely love FORM. It has meant so much to me to be a part of such an amazing group of people who are dedicated to providing the best care for infants and toddlers. FORM has changed a lot since I first started attending, and it has been great to see so many people take an interest in the group over the last few years.

“I first heard about FORM in the fall of 2015 soon after I received my B.S. in early childhood education. Although I can’t always attend the monthly meetings, I always look forward to reading the FORM newsletter and connecting with my friends.

“FORM has introduced me to many like-minded people, as well as RIE resources that have been of great value to me personally and professionally. I am so grateful to have this group as a support to me in my work with children and families. Being a part of FORM offers many opportunities for sharing ideas and resources and for making new friends.”

Why you should care about bugs