News for everyone, delivered to everyone
ONE YEAR LATER 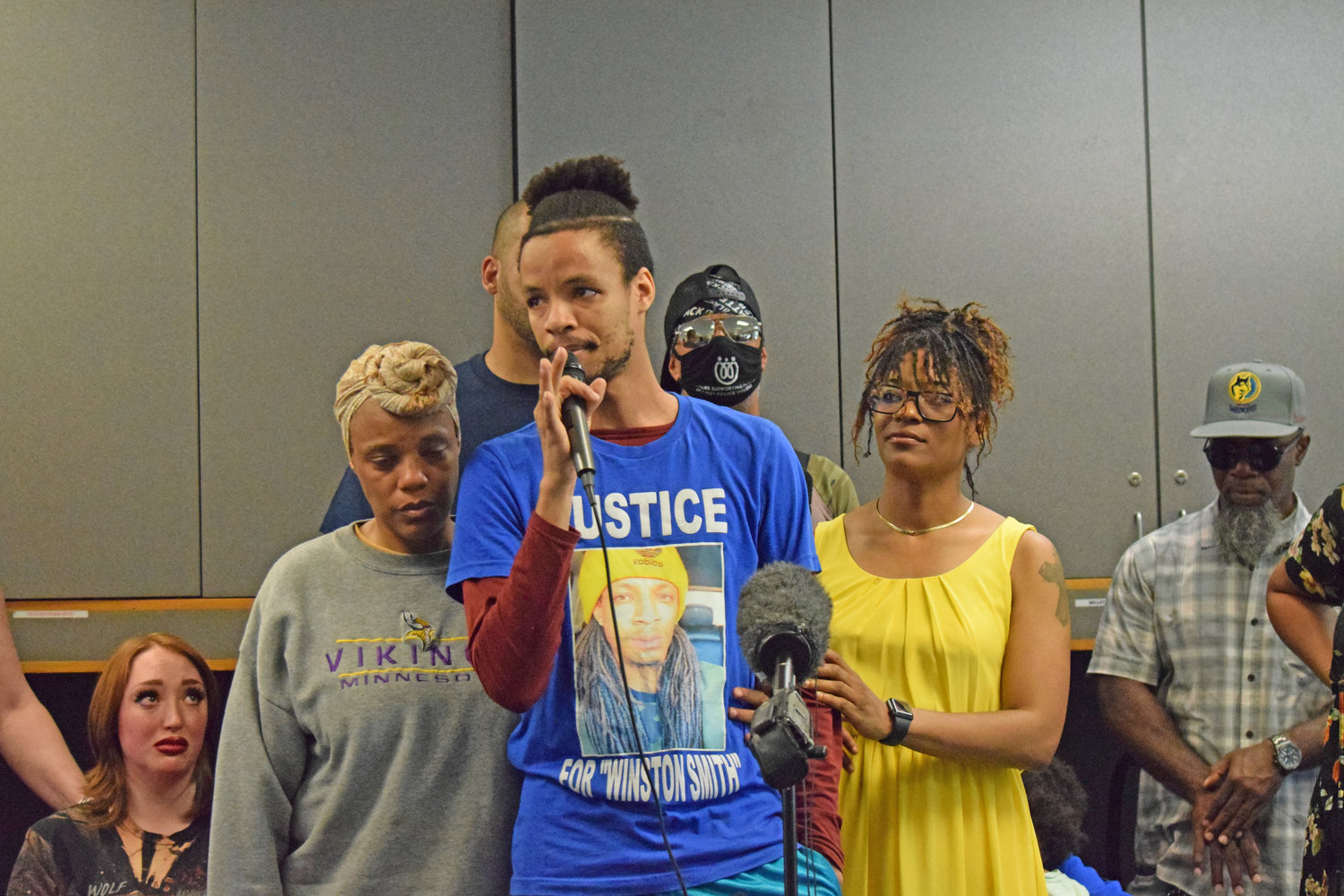 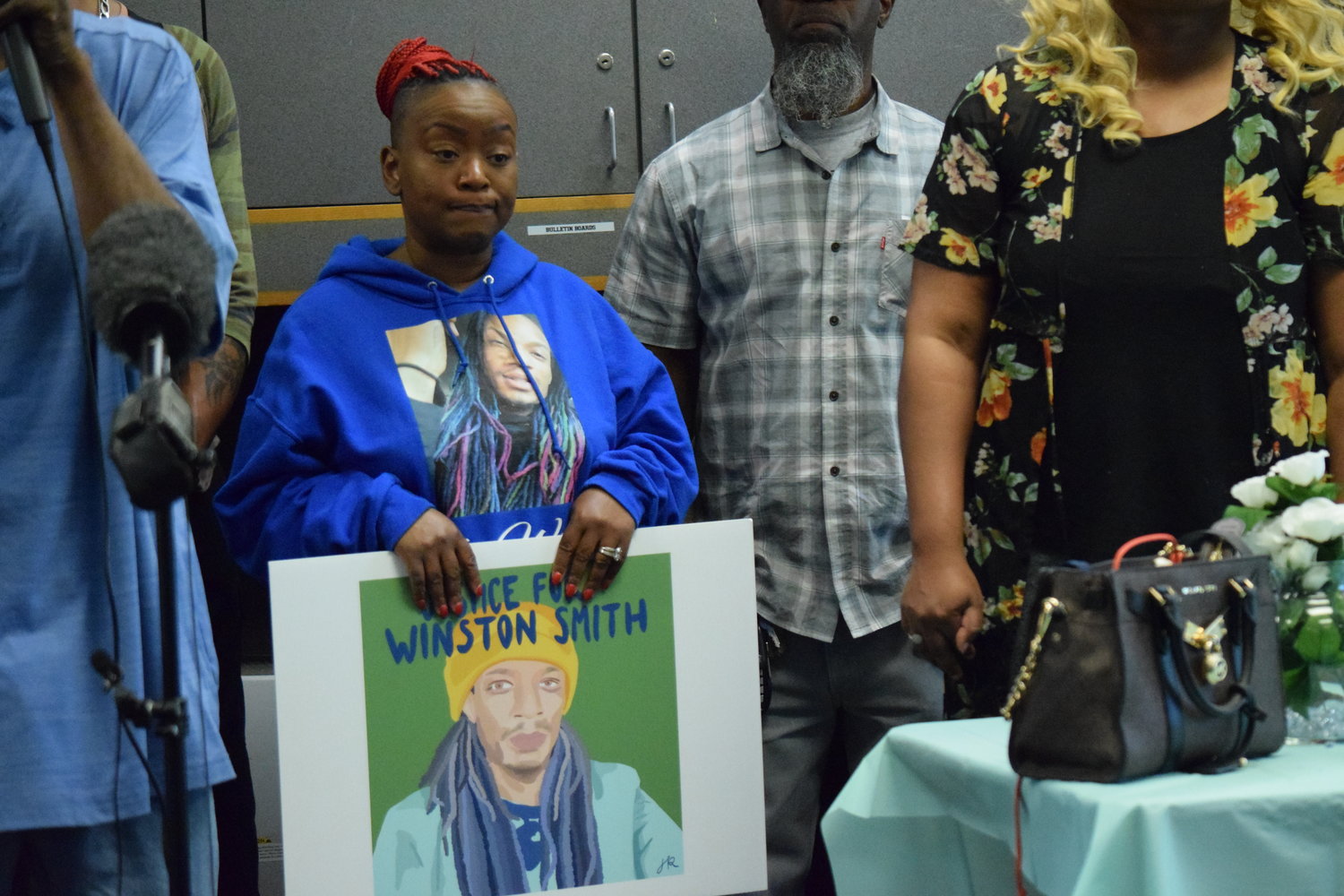 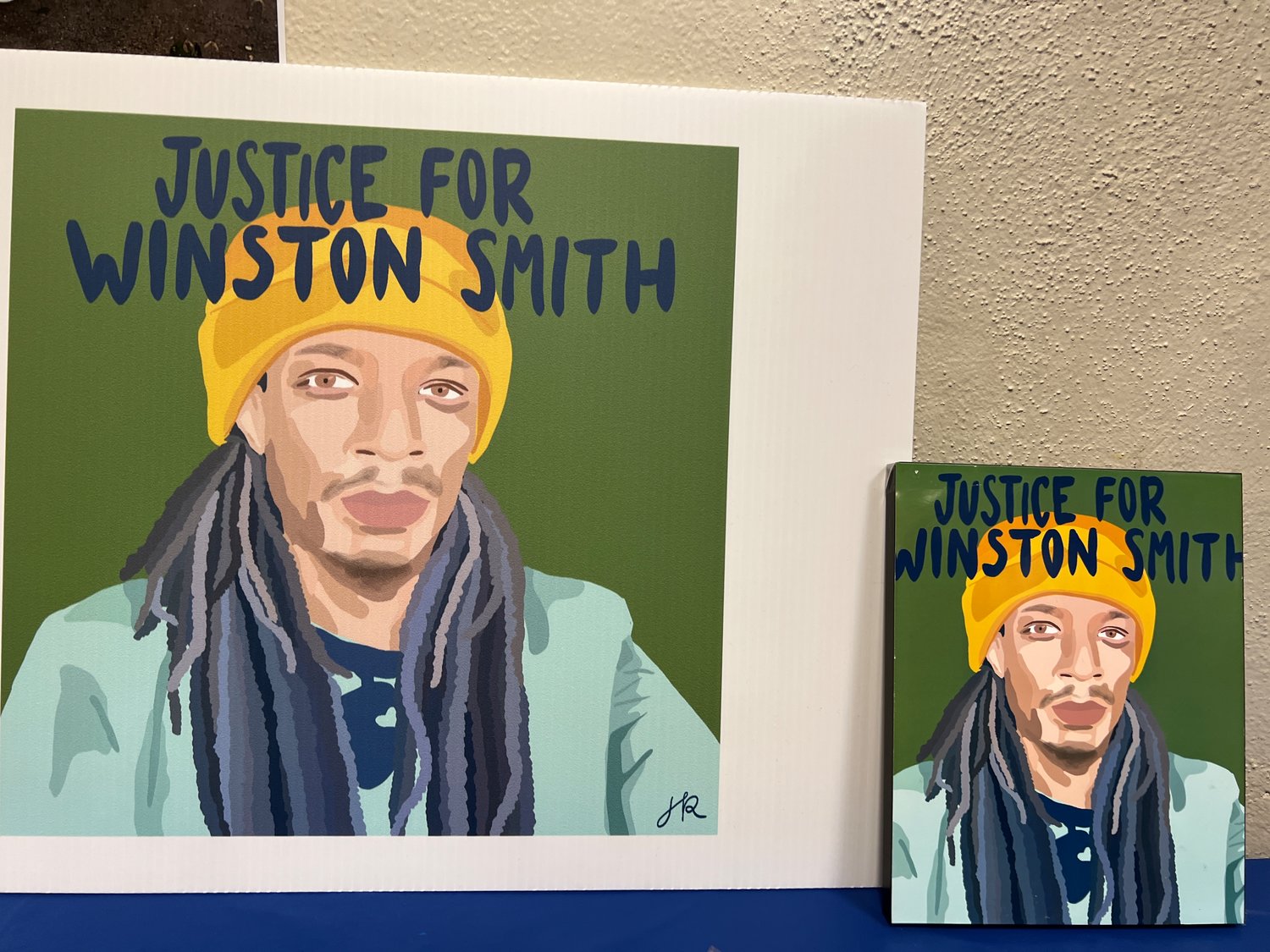 A portrait of father and comedian Winston Smith.
Jill Boogren 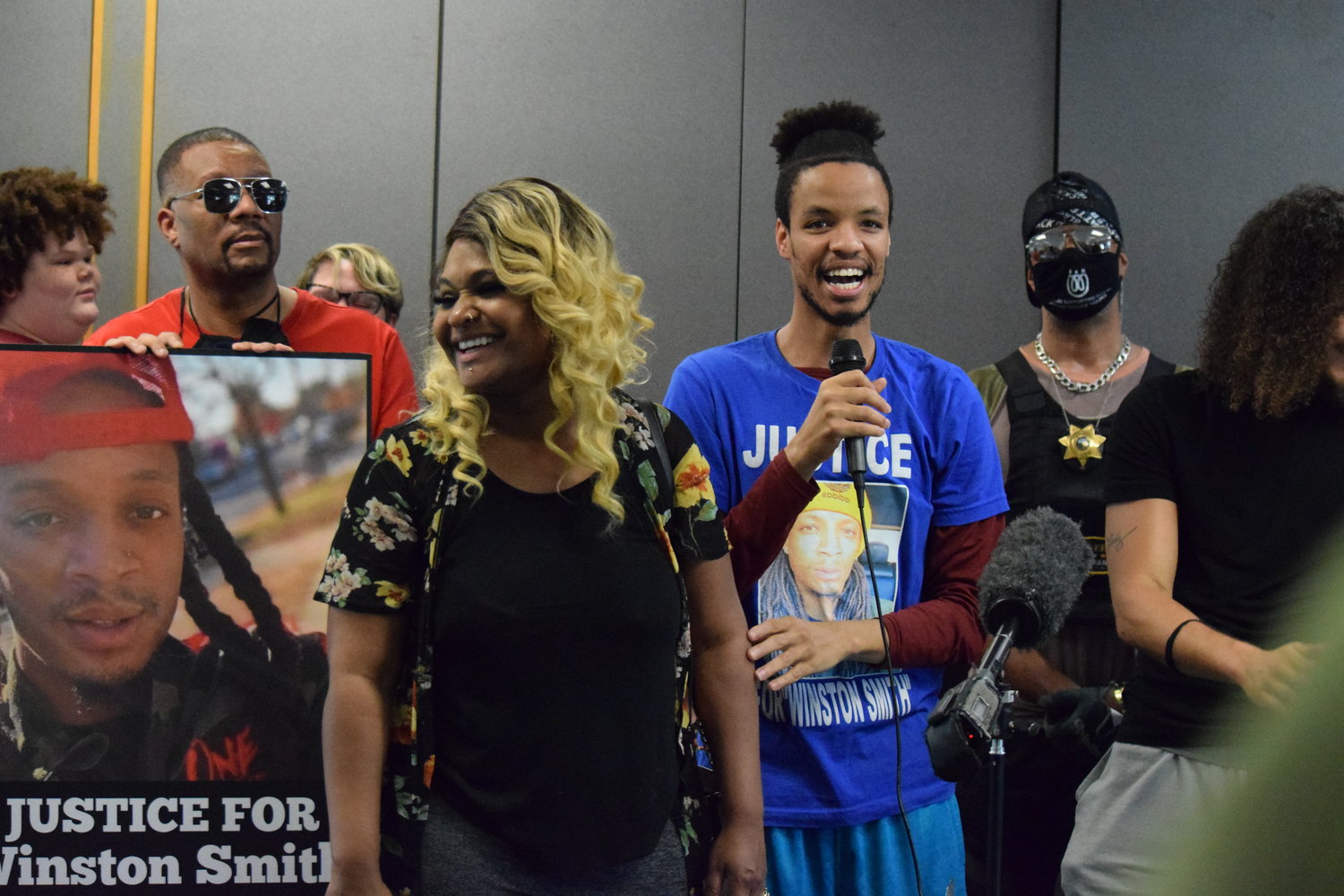 There's a moment of levity as Winston Smith's brother Kidale speaks. His father Winston Smith Sr. is at left holding a portrait of Winston, and Toshira Garraway Allen of Families Supporting Families Against Police Violence is at the center.
Jill Boogren 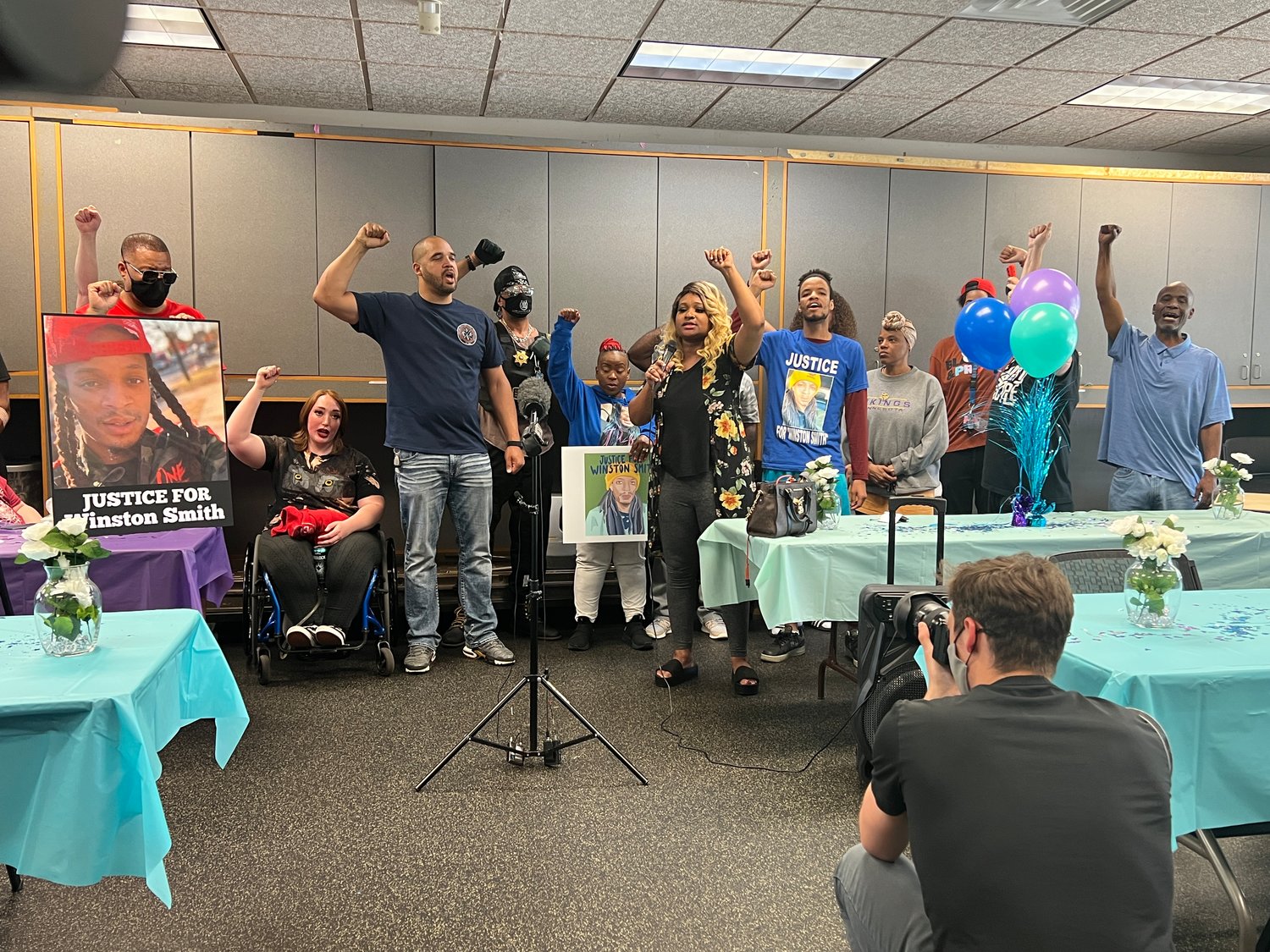 Family and friends speak the Assata Chant at a gathering held one year after Winston Smith was killed by law enforcement in Uptown Minneaolis. "We have a duty to fight for our freedom. We have a duty to win. We must love and support one another. We have nothing to lose but our chains."
Jill Boogren 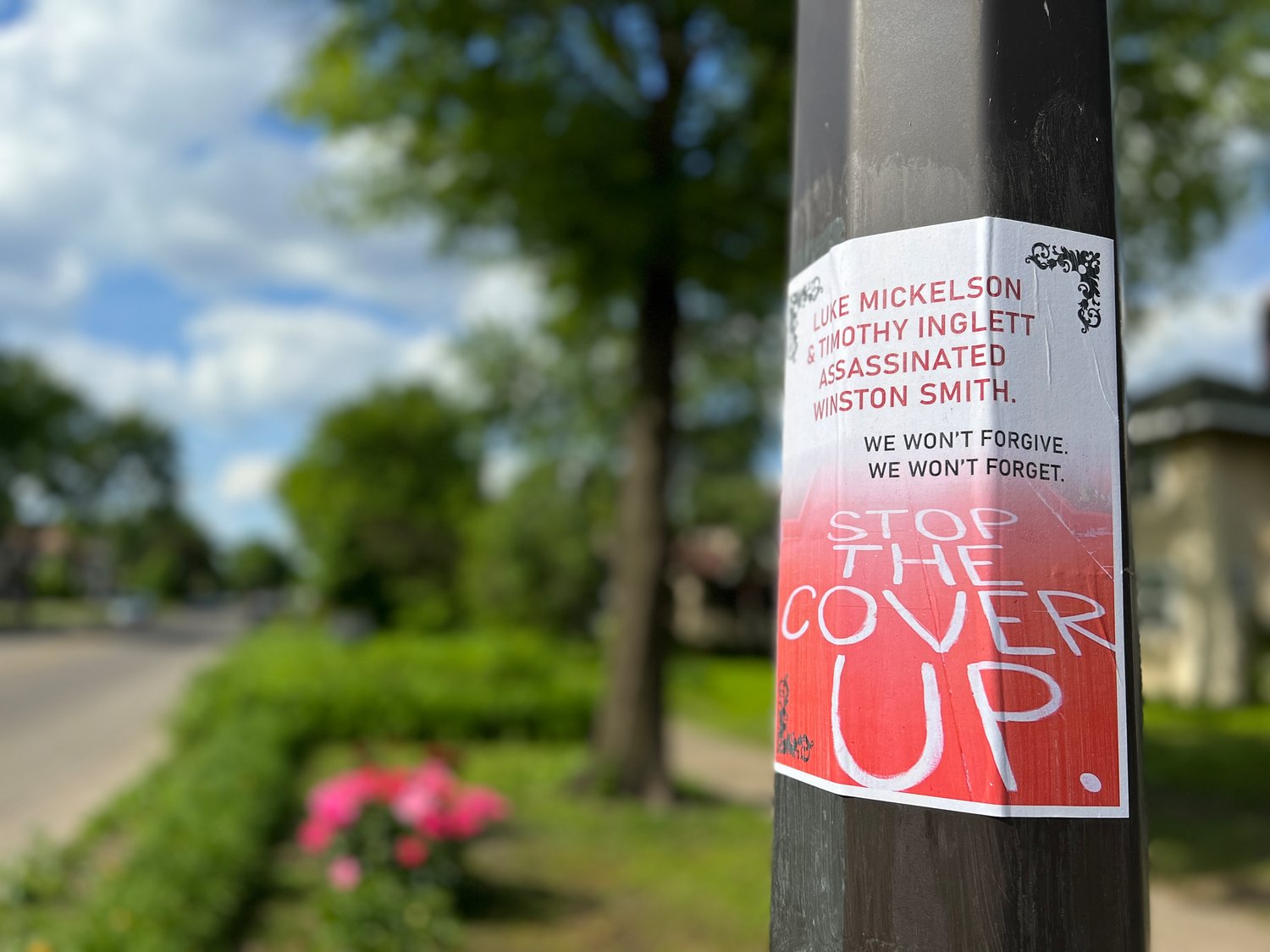 These flyers were recently affixed to lamp posts, utility boxes and road work signs up and down Lyndale Ave., north and south of Lake Street. Lyndale Open Streets was June 5. (Photo by Jill Boogren) 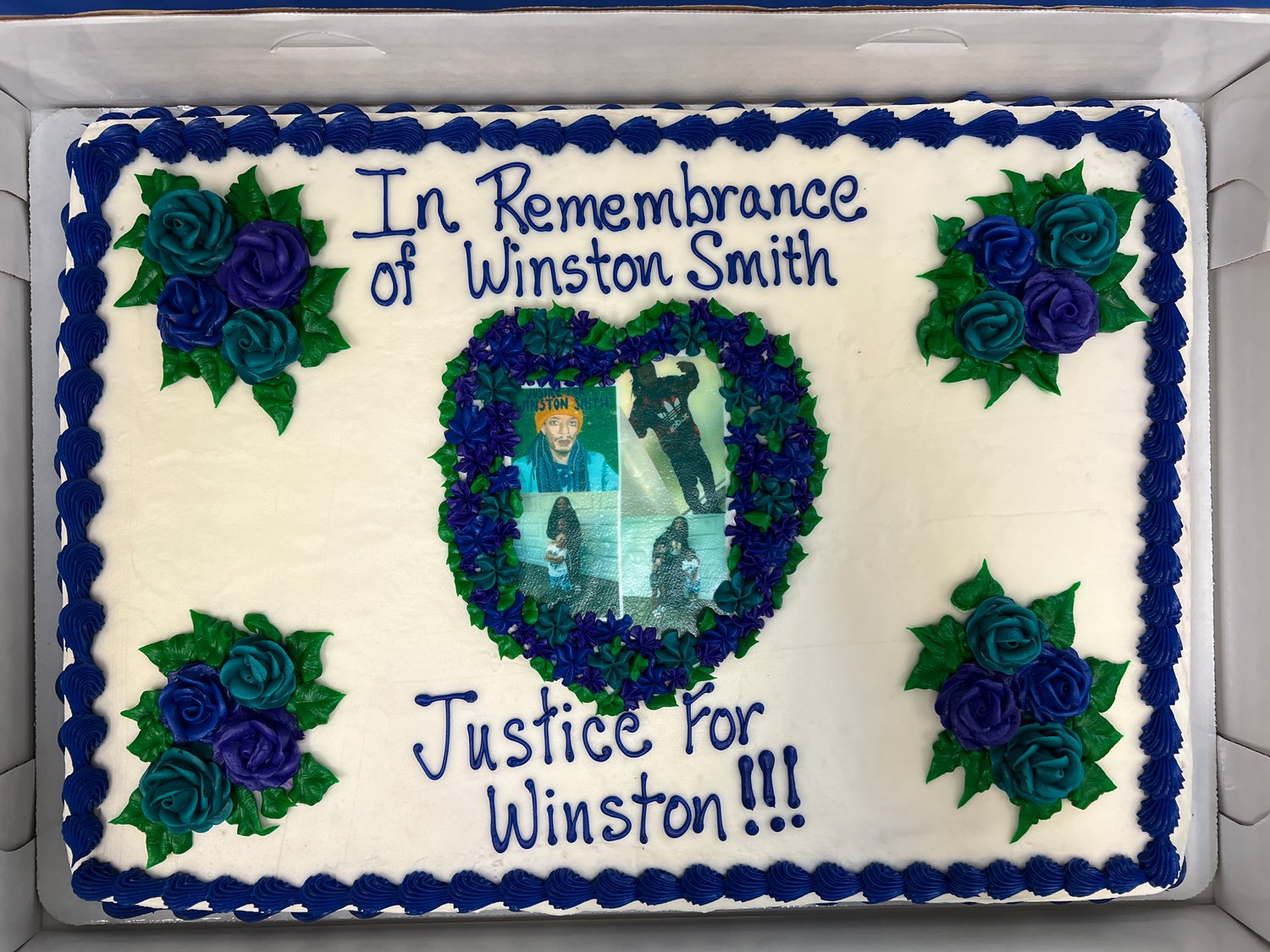 A cake made in remembrance of Winston Smith.
Jill Boogren
Previous Next
Posted Sunday, June 26, 2022 12:07 pm
By JILL BOOGREN

One year after law enforcement officers killed 32-year-old father and comedian Winston “Boogie” Smith Jr. at the top of an Uptown parking ramp, his family, friends and community members gathered at Powderhorn Park to remember Smith – and to demand answers.
“Not a single day goes by that I don’t visualize how they [killed] him,” said his mother Tijuana Wilson at the June 3 gathering.
On June 3, 2021, Smith had lunch at Stella’s Fish Café (1400 W. Lake St.) with a woman he had recently begun dating, Norhan Askar, before returning to the parking ramp. Once inside their vehicle they were boxed in by eight unmarked trucks and SUVs, and Smith was fatally shot. Part of the “North Star Fugitive Task Force,” which included U.S. Marshals and deputies from the Hennepin and Ramsey County sheriffs’ offices, the officers were allegedly there to arrest Smith for illegal possession of a firearm.
“They planned to come kill him. If they was comin’ to arrest him, they had time to arrest him when he was in the restaurant,” Smith’s mother said. “They followed him from the restaurant to the parking lot, waited ‘til he [got] into the car and caged him in.”
Smith’s sister, Tamara Wilson, said it’s been so hard on the family that they’re not the same, as a family or as individuals.
“We’re just livin’ life with no answers and broken hearts,” she said. “It just doesn’t make any sense. We need answers. Now, sooner than later. It’s already been a year. We have not heard anything.”
No one in the family has been contacted by Mayor Jacob Frey or the former or interim Minneapolis Police Chief since Smith was killed, and they still have many questions about the circumstances surrounding his death.
Authorities reported seeing a gun, but Askar, who was in the passenger seat, said she never saw a gun and that Smith was trying to use his cell phone to go live on Facebook. According to Askar, officers were not in uniform and did not identify themselves when they surrounded the vehicle shouting commands with guns drawn.
Winston’s brother, Kidale Smith, questioned the logic of interviewing witnesses on the first day while giving officers the “luxury” of a few days off.
“We need to be questioning the police that day of. There don’t need to be no wait, no. We need to ask you, ‘What was you doin’ at this time in this position when you decided to shoot this man? What was he doin’? Where was you standin’? How many people shot?’ So we can… get the real story right then and there.”
Authorities claim there is no body-worn camera footage of the encounter, although there are differing accounts as to whether wearing and activating them was required of the U.S. Marshals and/or local officers working alongside them [President Joe Biden signed an executive order on May 25, 2022, which mandates federal law enforcement agencies to adopt body-worn camera policies “that mandate activation of cameras during activities like arrests and searches and… expedite public release of footage following incidents involving serious bodily injury or deaths in custody”].
In its investigative report, the Bureau of Criminal Apprehension (BCA) did not release any officers’ names in order to protect the identities of officers working undercover. Unicorn Riot, however, reported in October 2021 that at least two officers’ names were mistakenly revealed that were otherwise redacted in the document: Hennepin County Sheriff’s Deputy Timothy Inglett and Ramsey County Sheriff’s Deputy Luke Mickelson. According to the report, each deputy met with senior special agents that same evening, had his photograph taken and his duty weapon, equipment and clothing collected as evidence. The BCA has removed the case file from its website while they scan and re-redact, but the report has already been downloaded and shared.
Coinciding with the recent Lyndale Open Streets event (June 5, 2022), flyers naming the deputies were affixed to lamp posts, utility boxes and road work signs along Lyndale Ave., north and south of Lake St. They include the image in street paint that reads “Stop the Cover Up” and the message “We won’t forgive. We won’t forget.”
The investigation was referred by Hennepin County to the Crow Wing County Attorney, who ruled in October 2021 that the use of deadly force was “authorized under Minnesota law” and no criminal charges would be brought against any of the officers involved.
Community and family are calling for an independent investigation into the matter.

‘Rest in peace, Winston’
A self-described ”music friend” of Smith’s described him as a very talented young man who worked hard, a wonderful person who smiled and laughed and “took command over the room when he walked in.”
Smith’s brother Kidale said Winston wanted to inspire people to better themselves.
“Rest in peace to Winston. This is far from done, man,” he said. “We need to get them officers out and they need to be held accountable, and they need to take responsibility for what they did, and they need to be fired. That’s it. Fired and go to jail. I’m not stoppin’ unless that’s the case.”

The right to assemble
Toshira Garraway Allen of Families Supporting Families Against Police Violence asked guests to also remember activist Deona Marie Knajdek, who was killed June 13, 2021, when motorist Nicholas Kraus rammed his SUV into a peaceful demonstration taking place at Lake St. and Girard Ave. on behalf of Winston Smith.
Though at the time the mayor referred to the incident in a press conference as a “car accident,” witnesses reported that Kraus accelerated toward them. According to the Hennepin County Court Complaint, Kraus told police the same thing, and surveillance video confirms these accounts.
On June 16, 2021, the Hennepin County Attorney’s Office charged Kraus with intentional second-degree murder and two additional felony counts of assault using a deadly weapon for injuries sustained by others at the scene. Kraus’ trial is scheduled to begin July 11, 2022.
“When you stand up for justice, when you stand up for what’s right, our lives are on the line,” said Garraway Allen. “We have a right to peacefully assemble, we have a right to be out there, and we had a right to stand up for Winston Smith that day without bein’ targeted and without someone bein’ murdered… [who] was peacefully assembling out there this time last year.”