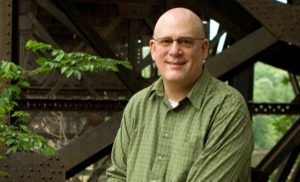 Engineering feasibility studies usually don’t have people sitting on the edge of their chairs but last month, supporters of the Midtown Greenway Coalition did just that.

More than 60 bike enthusiasts gathered on June 6, 2019, at the Hamline Midway Library to hear the results of the Extend the Greenway feasibility study, and to discuss the possibility of extending the Minneapolis bike trail into St. Paul.

The study involved in-depth structural analysis of the 100-year-old Short Line Railroad Bridge across the Mississippi River (east of 27th St. in the Longfellow neighborhood of Minneapolis).

Midtown Greenway Coalition executive director Soren Jensen explained, “With the support of our 35+ Extend the Greenway partners, and donations from hundreds of people on both sides of the river, we hired engineering firm Kimley-Horn and Associates to determine if the bridge could be rehabbed to safely support bikes and pedestrians. We are pleased to announce that the results are in –and it can!”

This isn’t the first time that the Short Line Bridge has been studied. Jensen said, “Hennepin County conducted an engineering study in 2006, and concluded that the bridge was just too old to be used as a connector. At that point, the conversation kind of died. For our study, we re-framed the question to be, ‘What would it take to strengthen the bridge to make it structurally sound?’ Kimley-Horn’s report outlined several options for rehabbing the bridge to make it safe for bikers and pedestrians. No matter which one is chosen, structural redundancies will have to be built into the bridge to make its usable.”

Jensen continued, “The idea isn’t to have all the answers right now, but to spark interest in re-examining the idea. The easiest thing would be if the train didn’t run, but ADM says they’re still investing in its use while the Atkinson Mill on Hiawatha Ave. operates. Almost all of our options involve sharing the bridge with the train, and could include building a replica bridge or adding a second story above the tracks.”

The existing 5.5-mile-long Greenway Bike Trail was built in three phases and, if everything works out, the expansion across the Mississippi River would be Phase Four.

Jensen said, “It’s important to remember that transit projects take time. This one would have a complicated funding structure pooling federal dollars, support from both Hennepin and Ramsey counties, the cities of Minneapolis and St. Paul, business and non-profit sponsors, and individual donors. What we hope to do is get the conversation started.”

Looking ahead, if the Greenway were extended as far as Cleveland Ave. in St. Paul, there would be safer bike and pedestrian access to Alliance Field, the State Fair Grounds, the Green Line LRT and more. Another advantage would be connecting the Somali communities at Skyline Towers in St. Paul with Cedar Riverside in Minneapolis via bicycle.

The Extend the Greenway Partnership also supports the proposed Min Hi Line in South Minneapolis, which would connect the Midtown Greenway to Minnehaha Falls Park.

Jensen said, “All organizations that share our vision of extending the Midtown Greenway are welcome to join us. The Extend the Greenway Partnership includes neighborhood groups, non-profit organizations and businesses from both Minneapolis and St. Paul. For more information, contact Soren Jensen at soren@midtowngreenway.org.