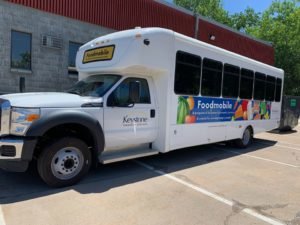 The new Keystone Foodmobile II has more storage space and the capacity to serve 50% more people at every distribution, bringing shelf stable, fresh, refrigerated and frozen food to everyone. The organization is doing drive-through food distributiong events, and started offering Free Farmers Market In A Bag in July.

Keystone also has a request in to the Minnesota Legislature for $1.5 million to acquire property along University Ave. The state funds would be used to purchase property and do predesign work. The second phase of the project would be to construct the new facility.

Keystone is looking at a potential site in Union Park’s planning district, with about 20,000 square feet of space. The Metropolitan Council application indicated the site could be near the Green Line lightrail Lexington Station area.

The social services agency recently conducted strategic planning and extensive community engagement processes, during which it was determined that a new centralized food distribution center should be along University Ave. The need for an improved food site was heard over and over again.

“Our two sites are bursting at the seams,” said Mary McKeown, Keystone’s president and CEO. The Iris Park food shelf at 1816 University Ave. is in a former storefront. The Rice Street facility at Rice and Arlington occupies part of a former heating and cooling business. Both buildings are showing their age.

Both facilities lack private space to meet with clients. Neither space holds more than half a dozen volunteers at a time. A new site will allow Keystone to serve more than 43,000 people each year with food, emergency assistance and connections to resources. It will also provide needed space for volunteers and for clients.

Keystone operates the largest food distribution program in the east metro area. Its location at 1916 University Ave. opened in the mid-1980s, moving there from a small food shelf at the Merriam Park Community Center.

Modern food shelves allow customers to shop and pick the foods they want, from the selection on hand. Efforts are made to provide culturally-specific foods for customers to choose from.

In 2019, Keystone helped almost 12,000 low-income households with food shelf and crisis assistance support. That breaks down to the equivalent of 166,080 bags of groceries.

Keystone in 2019 provided 27,000 people with food shelf support, a 9.5% increase over 2018. Overall, Keystone provided services for 37,544 people. Keystone has facilities and West Seventh and Merriam Park community centers, and through a bike shop and technology workshop in Selby Ave.

The Metropolitan Council awarded $3 million in polluted-site clean-up grants and $500,000 in additional grants that promote redevelopment and economic opportunity in the region. The grant awards are through the Livable Communities Program.

Through the region, the latest round of grants will help clean up 33 acres, create or retain more than 600 full-time jobs, increase the net tax base by nearly $2.4 million, help to produce and preserve more than 1,200 homes, including 767 affordable homes, and encourage millions more in private investment.

Information on grants for Midway Center redevelopment and the Keystone Community Services food shelf project appear elsewhere in this issue. Another clean-up grant went to developer Reuter Walton. The $111,800 will be used for cleanup on a 3.2-acre site that currently houses four vacant buildings and surface parking, at the northwest corner of University and Fairview avenues. The development will include 280 affordable apartments with 2,440 square feet of commercial space with underground and surface parking.

Grants obtained through Metropolitan Council go through an application and approval process with the city. The St. Paul City Council in June voted to accept grant funding for the 1222 University Ave. project, which would turn a former casket company into 62 affordable apartments.

The city council also voted in June to apply for more grants including $500,000 for the Reuter Walton project.

Kimball Court is a 76-unit congregate/single room occupancy property with 54 single-room units with shared bathrooms and 12 single-room units with kitchens located at 545 Snelling Ave N. It houses single adults who have experienced homelessness, and is owned and operated by Beacon Interfaith Housing Collaborative. Beacon acquired the property in 2011. It was previously owned and operated by Amherst H. Wilder Foundation.

The project doesn’t generate cash flow. With its shared space, it also poses increased health risks during the pandemic. Residents face elevated risks of becoming sick, as many have underlying health conditions or disabilities.

Current tenants in some units may be unable to meet their rent obligations due to the economic impact of the pandemic. At the same time property owners may experience increased operating costs related to increased cleaning and other health measures. Federal Housing and Urban Development (HUD) officials are allowing projects like Kimball Court to set up capitalized reserves to preserve the financial viability of the housing.

The city is providing a $92,750 forgivable loan to fund the property’s operating deficit.