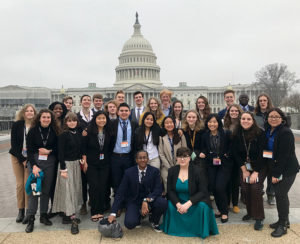 Twenty-seven seniors currently studying AP Government and AP Macroeconomics spent the last week of February 2020 in Washington D.C. The participating students were part of the national Close Up program, which promotes civics education and participation in our democracy with the capital city as a living classroom.

Students met with Congresswoman Betty McCollum in her House of Representatives Office and also discussed policy with staff and legislative aides from Senator Smith’s and Senator Klobuchar’s Capitol Hill offices.

While observing the House of Representatives in session from the House Gallery, Como students witnessed Congresswoman Alexandria Ocasio-Cortez present the Green New Deal Resolution. For several students who enthusiastically advocate for and support the proposed legislation, it was inspiring to see a Congresswoman they know speak passionately about the issue.

Throughout the week, Como students were engaged in policy discussions and simulations with peers from across the nation and beyond in workshop groups. A total of 150 students represented the states of California, Texas, Louisiana, Utah, Michigan, Illinois, Indiana, as well as Puerto Rico and Panama.

The annual adventure to Washington D.C. for Como AP Government students is made possible through student and school-sponsored fundraising activities, with generous scholarship support from individuals in the Como community. The Como Park Booster Club, Rice St. Athletic Club, and Friends of Como Athletics (FOCA) are also significant contributors.

Cadets meeting or exceeding standards in those or any of the other five activities earned a Distinguished Military Training Award (DMT). All cadets performed exceptionally well - rising to challenges and strengthening bonds. They returned to Como with great stories of adventure.

Family and Consumer Science teacher Courtney Gbolo was selected as a semifinalist for the Minnesota Teacher of the Year Award. Of 134 nominees, 36 were selected as semifinalists.

Ms. Gbolo teaches Culinary Arts and has developed an International Cuisine course that incorporates knowledge she gained from a grant to study at Le Cordon Bleu in Paris. She values the opportunity to create a classroom culture which allows students to explore and collaborate.

“Teaching CTE (Career and Technical Education) classes provide students with real-world opportunities to explore career paths,” Gbolo said. “I have former students who are thriving in fields that our programs have exposed them to, which is really rewarding.”