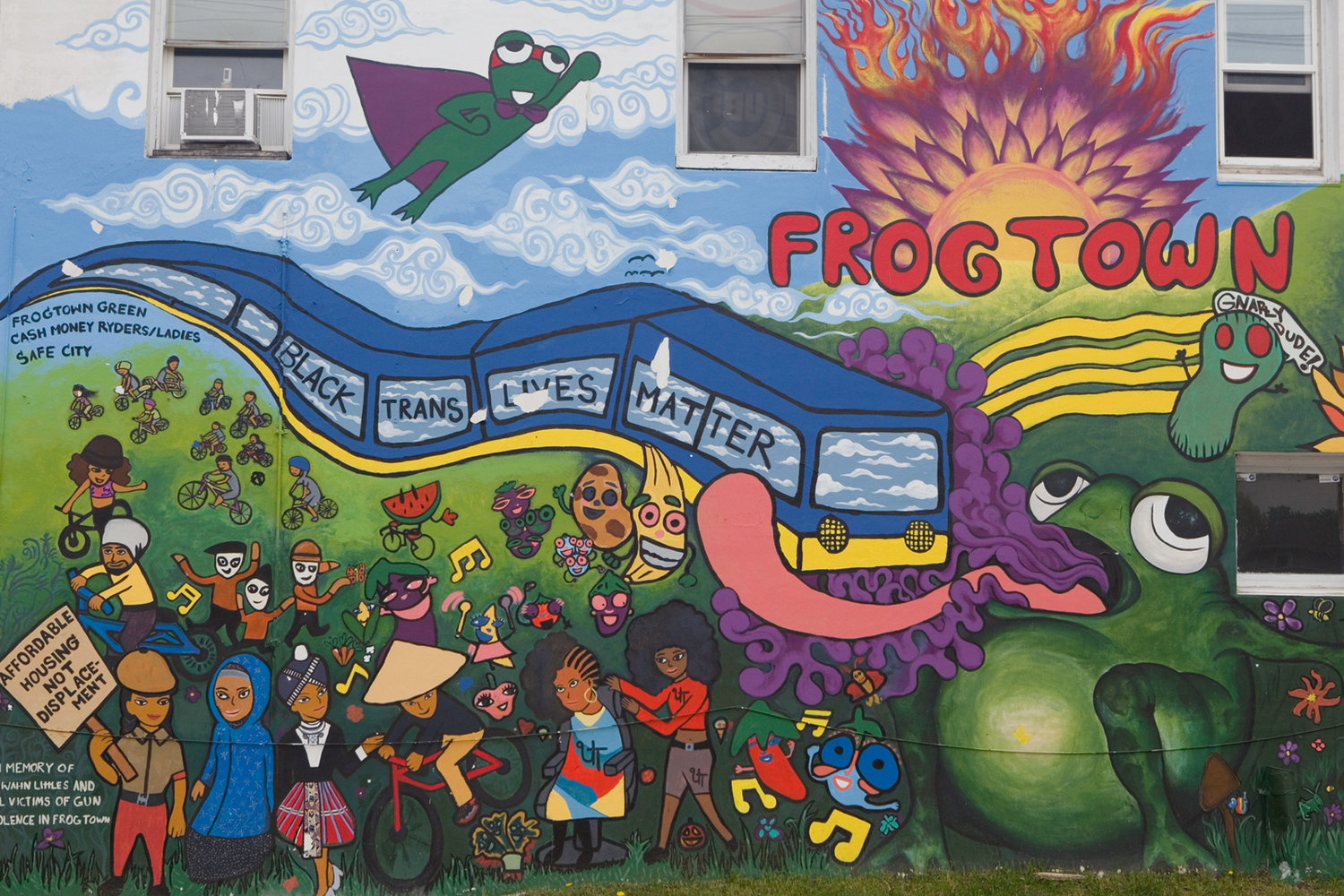 A mural adjacent to the Lily Pad garden on the southwest corner of Dale St. and Lafond Ave. celebrates neighborhood pride. (Photo by Margie O’Loughlin) 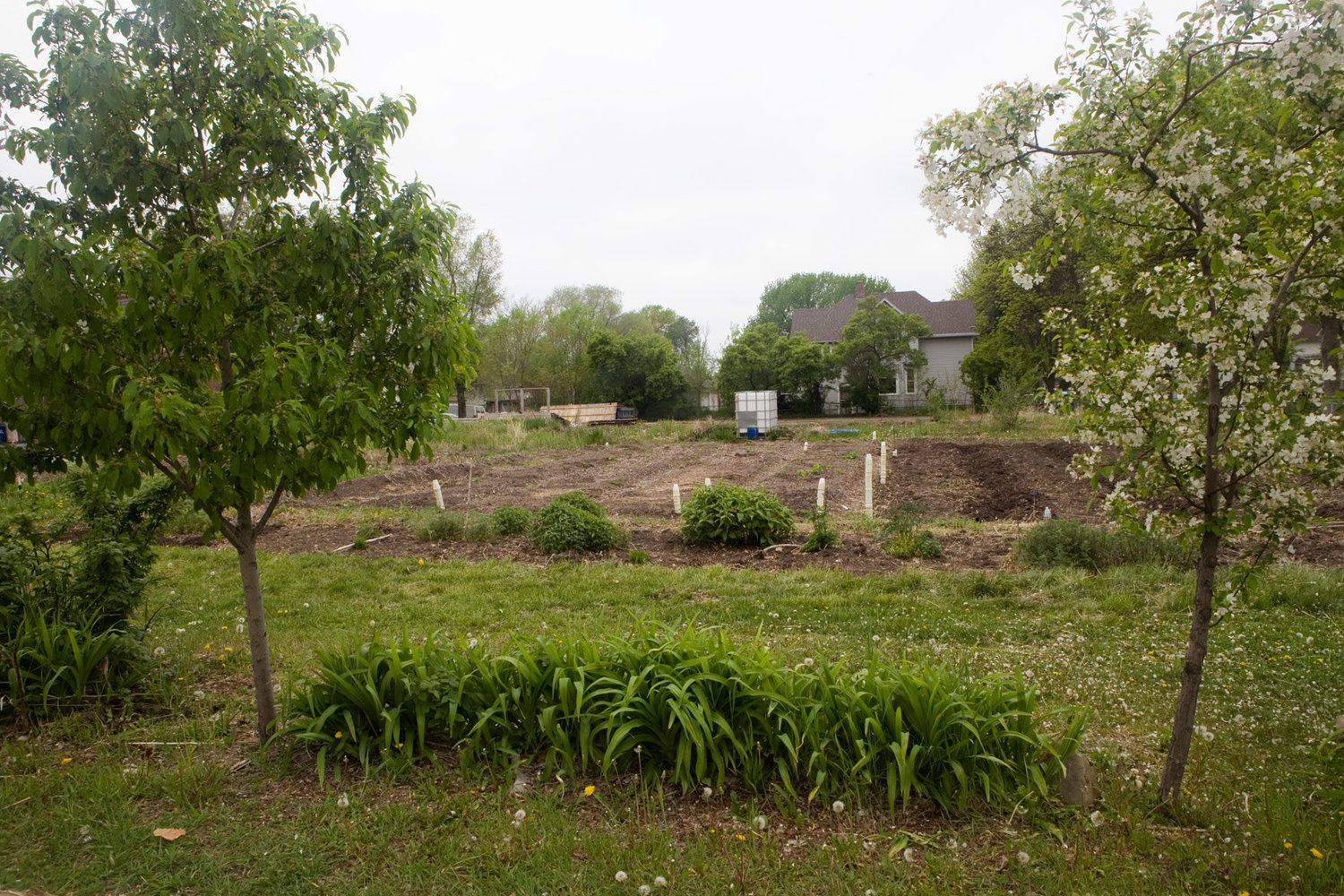 Hydroponic gravel bins have recently been added to the garden. One hundred bareroot fruit and shade trees will summer-over there. The trees will be given to residents who have requested them for fall yard plantings. Check www.frogtowngreen.org for more information.(Photo by Margie O’Loughlin)
Previous Next
Posted Wednesday, June 9, 2021 7:00 pm

“We grow crops, plant trees, promote parks, share information, and celebrate Frogtown in every way we can.””
~ Patricia Ohmans
By MARGIE O’LOUGHLIN

The Lily Pad is an emerging community garden and gathering space on the southwest corner of Dale Street and Lafond Avenue in the Frogtown neighborhood.
The Hmong Funeral Home occupied that space from 1994 until it was shuttered and demolished in 2008. Then the 25,000-square-foot piece of land – equal in size to five city lots – rested. In the last four years, squash vines have started to wind along the ground, and crisp, leafy vegetables line the garden rows.
Members of Frogtown Green, a volunteer-powered, resident-led group began turning the vacant lots into community gardens in 2017.
Frogtown Green founder and director Patricia Ohmans said, “We manage four other garden sites in Frogtown, but the Lily Pad is our most ambitious project to date. Through a partnership with Safe City Community Project, we’re able to lease this land from the city of Saint Paul.
“The plots are larger than typical community garden beds. We offer them at no cost to Frogtown residents; mostly refugee, immigrant, and elderly gardeners and their families who live nearby. Many of our Asian elders were farmers in their countries of origin; now they’re demonstrating how to grow healthy, organic food sustainably and close to home.”
The flower beds and grounds at the Lily Pad are cared for by Frogtown Green volunteers and summer interns.

More green space needed in Frogtown
Frogtown Green projects and sites are working to make Frogtown the most sustainable neighborhood in St. Paul. Ohmans said, “We grow crops, plant trees, promote parks, share information, and celebrate Frogtown every way that we can. We’re always asking ourselves how we can make our neighborhood healthier, wealthier, and more beautiful?”
The Lily Pad is a community gathering space and seasonal outdoor environmental commons in the heart of a neighborhood predicted to be hard hit by climate change. A model for public outdoor space use, it is both a place to relax and a place to learn.
Eventually seven learning stations will be installed that address different challenges of climate change for under-resourced urban households. Visitors can learn about simple, affordable ways to mitigate some of the inevitable effects of a changing climate: like planting trees, composting food waste, and “harvesting” rain water to irrigate garden beds.
Once COVID-19 restrictions ease, sustainability programs and activities will resume. Frog Lab, a kid-friendly science and art workshop will be offered at the Lily Pad starting in June.
This summer, composting and food waste education stations will be added at the Lily Pad, along with rainwater harvesting demonstrations and, thanks to a grant from the Capitol Region Watershed District, a rain garden to divert storm water runoff.

Inequities trigger poor health outcomes
Frogtown is Saint Paul’s most racially and ethnically diverse neighborhood. One third of its residents were born outside the United States. It is multiracial, with a majority Asian population. It ranks in the 96th percent statewide for toxins including breathable diesel particulates, made worse by the high volume of semi-truck traffic on Dale Street and the Pierce Butler Route. The poverty rate is 35%, and more than one third of its residents are under the age of 18.
According to Ohmans, a Frogtown resident for 40 years with an advanced degree in public health, “The neighborhood is lively, vibrant, entrepreneurial, and neglected.”
She said, “I started out as an advocate for the Frogtown Farm and Park 13 years ago. Over time, I saw that the environmental deficits in our neighborhood (on top of the poverty) were linked to disproportionately high rates of asthma, heart disease, and cancer. With climate change, these numbers will continue to grow.”

Free shade trees for residents
The city of Saint Paul has set a goal of a 35% city-wide tree canopy to help keep the air clean, and the residents cool. In Frogtown, the tree canopy is just 23% – the lowest of any neighborhood in Saint Paul, besides Downtown.
Frogtown Green has given away and helped install more than 500 trees for residents over the years. There are 75 trees designated for residents of Frogtown this year, 25 for residents of Hamline-Midway, and 25 for residents of Summit-University. The trees are 5-6 foot tall, with both shade and fruit trees available.
If you’re a resident of one of those neighborhoods, visit the Frogtown Green website at www.frogtowngreen.com/tree-frogs-pop-up-park to choose one of the six varieties for your front or back yard. These trees cannot be planted in boulevards. Landlords of rental properties, as well as home owners, are eligible.
The bare root trees will summer-over in hydroponic gravel bins just installed at the Lily Pad. When ready for planting in the fall, the trees will have healthy, non-compacted roots ready to grow. The goal of Frogtown Green is to plant 500 new trees by 2025.

Bringing people together with shared purpose
The events and programs organized by Frogtown Green give people a chance to overlap who might not ordinarily do so. Ohmans said, “We’ve got college students learning from gardeners who are mostly elderly immigrants or recent refugees.
“We’ve got long-time, middle-class Frogtown residents planting trees on rental properties, with help from tenants who may not be there next year.
“We’ve got folks from other neighborhoods working side by side with residents to plant pollinator gardens, joined occasionally by students from neighborhood schools like St. Agnes and Great River.”
“We’ve got the Cash Money Ryders Motorcycle and Social Club joining forces with the urban missionaries from Safe City Project to distribute free food at the Lily Pad on event days. I guess you could say, ‘We’ve got it all.’”