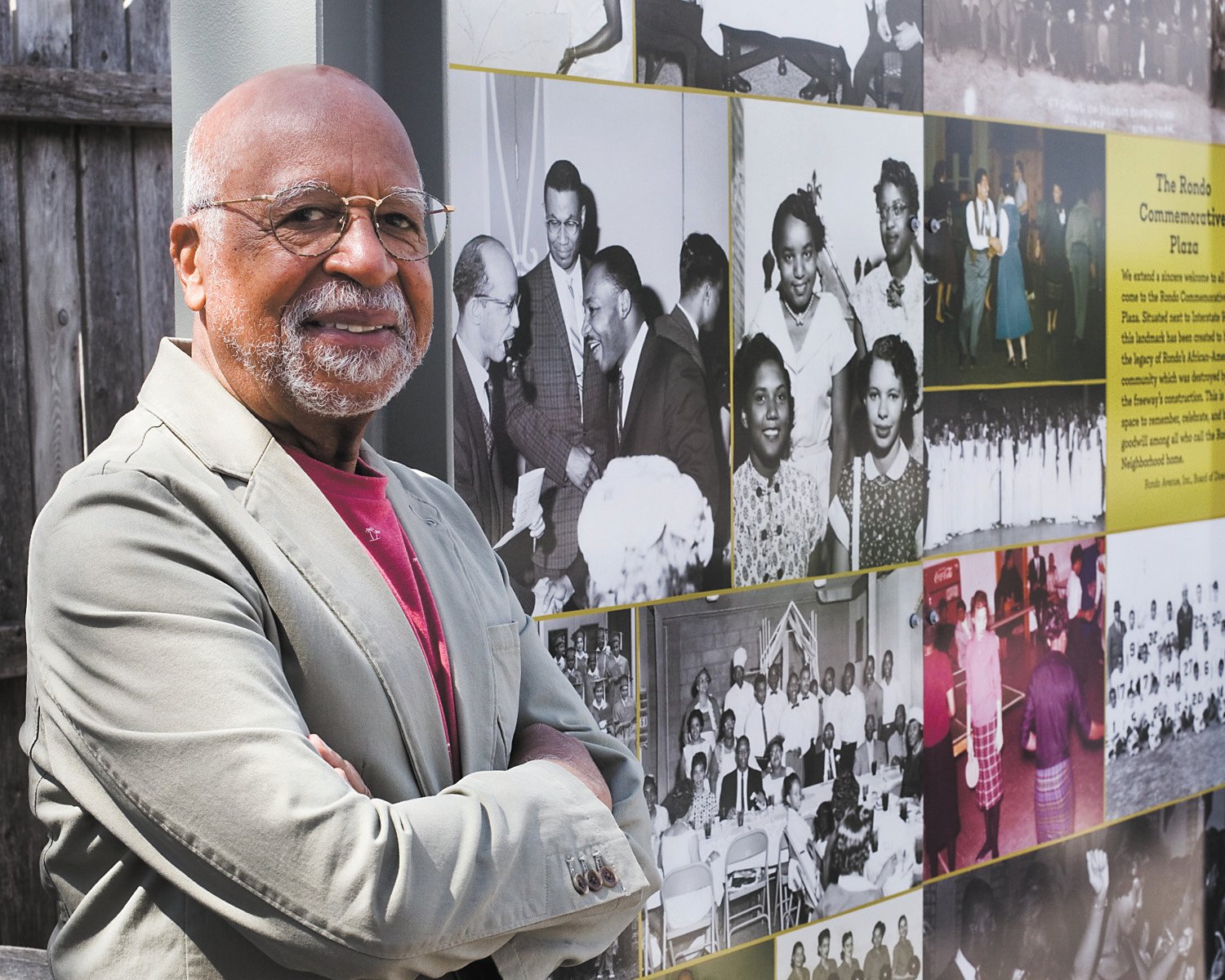 Marvin Roger Anderson at the Rondo Commemorative Plaza (on the corner of St. Anthony and Fisk avenues). (Photos by Margie O’Loughlin) 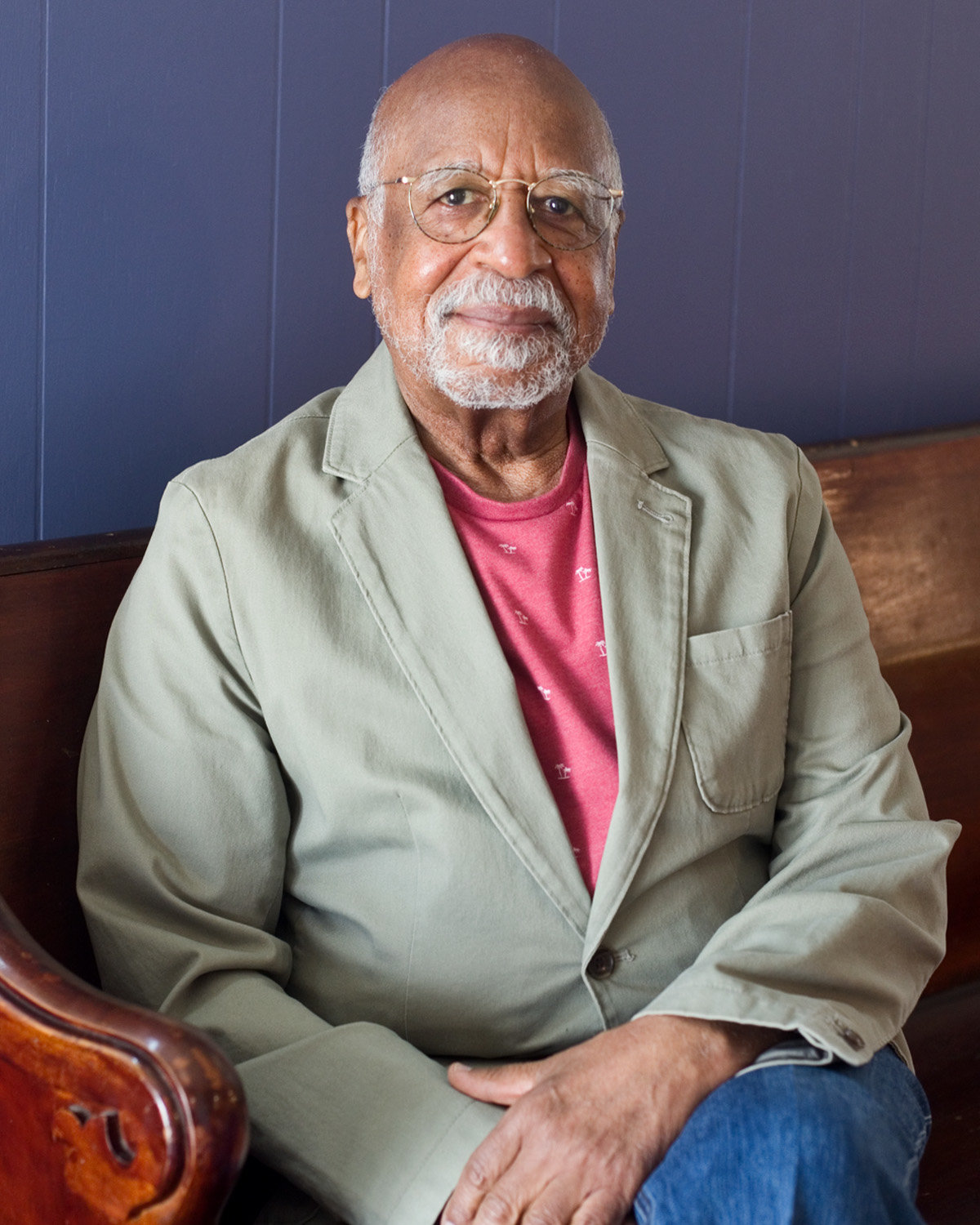 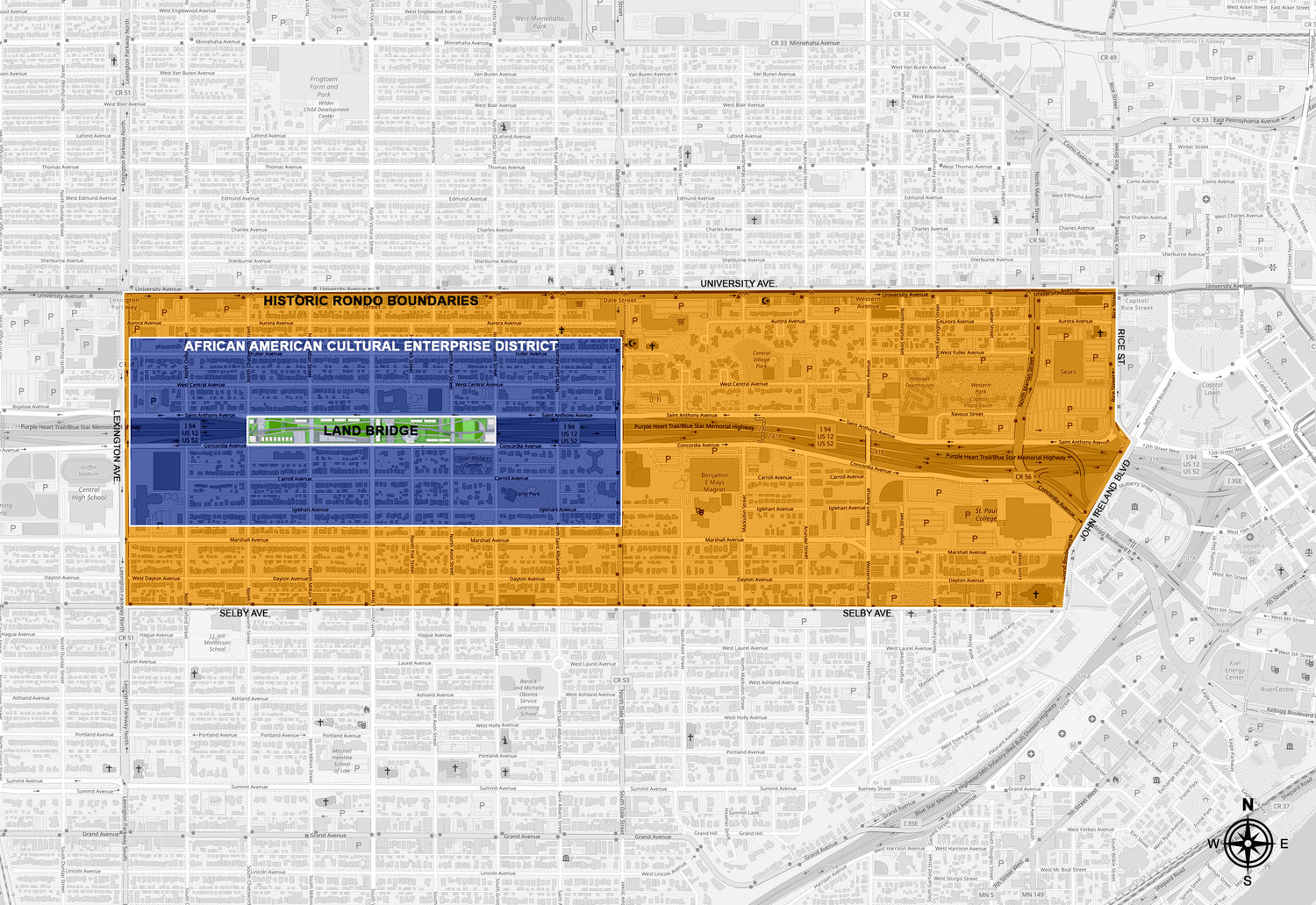 There are several ways to get involved with ReConnect Rondo’s restorative movement. Register for a free, one hour listening session on May 24 to get started. Each of the next three days offers sessions on different aspects of the Land Bridge and the African American Cultural Enterprise Corridor. Listen, learn, weigh in, and share your thoughts by registering at https://reconnectrondo.com/engage/.

ReConnect Rondo (RCR) is leading the effort to revitalize St. Paul’s Rondo neighborhood. The non-profit organization and its partners propose building a community land bridge that would cap I-94 for several blocks. Construction of a land bridge would be the first step toward replacing what was lost half a century ago, when construction of the interstate destroyed the Old Rondo neighborhood (see map for details).
According to the RCR website, Rondo was the center of African American life in the Twin Cities, with about 80% of the local Black population living there at the time of freeway construction. It was a hard-working, vibrant community supported by social clubs, religious organizations, community centers, and a thriving business community.
More than 700 African American families were forced to sell their homes in the 1950s, and were under-compensated for their value. An estimated 300 small businesses and institutions were also destroyed to make room for the freeway. The overall impact resulted in a 61% population loss in Rondo.
A less disruptive northern route for I-94 was under consideration at the same time. It would have followed the rail lines through what is now Energy Park, and resulted in much less displacement of homes and businesses.

No just compensation for home owners
Rondo native Marvin Roger Anderson is a tireless advocate for the neighborhood he grew up in. He co-founded an annual celebration called Rondo Days in 1983, and has been honing the land bridge vision, along with several other community members and project partners, for more than a decade.
Anderson was 18 years old when his family was forced to sell their Rondo home and business. He would go on to have a long, successful law career, but as a young man he learned about the power of eminent domain the hard way – when his family’s home and business were seized.
Eminent domain is the authority of federal, state, and local governments to take private property for public use, providing they give just (or fair) compensation to the owner.
Anderson said, “In the case of Rondo, and probably all of the 1,200 other communities destroyed to make way for I-94 across the country, there was no ‘just compensation’ paid to residents by the government.”

One family’s story
Anderson explained, “Our family’s story wasn’t that different from the other families in the neighborhood. Everybody worked hard and found a way to get by, and many used their homes as a way to make extra money to live on.
“My father worked for more than 40 years on the railroad, earning a minimum wage of $0.75 cents/hour as a waiter by the end of his tenure. He worked 18-hour days, and slept nights in a dormitory car with only the heat from the locomotive to keep the waiters warm.
“Somehow, he convinced four of his friends to go in with him on a real estate development project. Together, they applied for and received an FHA loan that enabled them to build two row houses in Rondo with six rental units in each. It was the largest loan the FHA had granted up until that point to a minority person or group. With that loan, the federal government backed their dream and made it possible for my father and his friends to earn a decent income for their families. Those 10 years were good years for my father.”
When the rumored interstate construction became a reality, appraisers moved through the Rondo neighborhood to talk with property owners.
Anderson said, “My father believed the rental units were each worth $11,000, but he and his partners were offered only $3,000 per unit. ‘On paper,’ the appraiser said, ‘the Rondo neighborhood was labeled a slum, and the units were marked as poorly constructed.’ The group contested their valuation in court, but the process took money, time, and effort. Eventually my father and his partners were worn down, and they accepted payment of $4,000 per unit.”
Anderson estimates that if the properties had survived, they would have been worth close to $2,000,000 in today’s market.
He said, “There was an incentive for undervaluing homes that came from the top down, and the loss of generational wealth brought on by the these kinds of deals is still being felt today. What my dad went through pretty much destroyed him.”

African American Cultural Enterprise District
A community land bridge is the catalyst for restoring what was lost with the original I-94 construction, and for reigniting a vibrant African American Cultural Enterprise District in the reconstructed Rondo neighborhood.
Proponents of the land bridge believe that reconnecting the two sides of Rondo will provide critical support for a thriving community, and improve the quality of life for all Rondo residents.

What would it look like?
RCR envisions approximately 500 new housing units – to replace a good portion of the 700 homes that were destroyed. The units would be built with 21st century design for 1,000+ residents. Anderson said, “We plan to combine affordability, energy efficiency, and an emphasis on Green Space for better health outcomes. We anticipate being a demonstration site for net zero, solar powered living.”
To minimize the risk of real estate speculation and gentrification, RCR will build in creative financing tools to ensure direct community benefits to residents. Possible financing includes land trusts, investment funds from development projects on the newly created land bridge, and housing cooperatives. There would be a “Right of Return” for descendants of Old Rondo whose homes were taken for the I-94 construction.
In addition, there would be opportunities for culturally appropriate retail spaces (including start-ups), grocery stores, restaurants, non-profit organizations, and other businesses necessary for a fully functioning neighborhood.
Anderson said, “At its heart, the African American Cultural Enterprise District must transmit the vibrant memories of what was lost into the minds and imaginations of our young people. This is crucial. What we’re trying to recreate is the economic, social, and political power that was Old Rondo.”

Time to right the wrongs
Keith Baker is the executive director of RCR. He brings more than three decades of community-based work to his position, including 18 years with the Minnesota Department of Transportation.
He said, “Our vision is to become a national model for equitable development success, and to be known for leading a restorative movement in Minnesota. RCR is setting the marathon pace. It’s going to take perseverance, but we can do this.
“We envision structures placed on top of the land bridge in some configuration, but it is premature to say where and how. Further analysis and community engagement will be required. If successful at the legislature, predevelopment resources will help us refine the vision.”
In many ways, the timing for this project could not be better. Two pieces of legislation in support of the Land Bridge have now been authored and sponsored in the Minnesota House of Representatives.
Simultaneously, U.S. Secretary of Transportation Pete Buttigieg has pledged to support the Federal Highways to Boulevards Program, which would earmark significant federal funding for neighborhoods like Rondo destroyed by interstate construction.
Anderson concluded, “The Great Migration was the relocation of more than six million African Americans from the rural south to northern cities. Between 1915-1970, African Americans came north fleeing Jim Crow segregation, searching for jobs and a better life. The second largest displacement of African Americans was caused by the construction of the interstate highway system, which destroyed more than 1,200 intact communities across the country. We have an opportunity to right the wrong that was done to Old Rondo.”

As we enter into a new year