2016 was a big year for Como poet and performer Brian Beatty. He had two poetry collections accepted for publication, “Coyotes I Couldn’t See” and “Brazil, Indiana.” 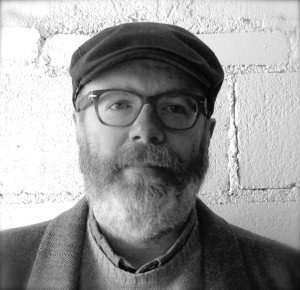 “At 46 years old, I was late to get something book-length published. This interest in my work motivates me to keep knocking out poems.”

Beatty was writing poems in high school English classes when he should have been reading Mark Twain or F. Scott Fitzgerald. “Initially I was inspired by the song lyrics of my favorite bands, but I quickly realized, with the help of a great teacher, that song lyrics and poetry weren’t the same thing—mostly because I was no Bob Dylan,” recalled Beatty.

In college, he studied fiction writing because that seemed more practical. “At the time, you could still sell short stories to magazines,” stated Beatty. He sold one to Seventeen magazine during his senior year of undergrad.

His first published poem worth anything was about a homeless man who tucked the money he panhandled into his boot. It appeared in a university literary magazine, across the page from a poem by Charles Bukowski. “I was pretty pleased (and smug) about that at the time,” said Beatty.

In 1994, he earned a master of fine arts degree in fiction writing from Bowling Green State University in Ohio, and then quit writing for about a year.

“I’d pushed too hard too soon,” he explained.

He questions university MFA programs, worrying that the university’s ownership of literature has done something to poetry and fiction traditions. “Not enough of writing these days is about what happens outside of academia,” said Beatty.

When he eventually returned to a computer keyboard, it was with ideas for poems instead of short stories. “I’ve stayed at it since then because I’ve never found a creative outlet that feels as natural to me,” said Beatty.

Over the last 25 years, Beatty has written for over 20 publications. Among them are Arts Indiana, The Bark, City Pages, Elephant Journal, The Evergreen Review, Glasgow Review of Books (Scotland), Lake Country Journal, Publishers Weekly, The Quarterly, The Rake, The Sycamore Review, The Writer, Urthona (New Zealand) and Yankee Pot Roast.

The bearded jokester has appeared on more than 15 stages, such as the Bedlam Theatre, Brave New Workshop, MPR’s Fitzgerald Theater, 2010 and 2011 Minnesota Fringe Festivals, The Playwrights’ Center, The Ritz Theater, The Soap Factory, Trylon Microcinema, The Turf Club, and the Woman’s Club of Minneapolis.

For two years Beatty hosted “You Are Hear,” a monthly literary podcast, for mnartists.org, a joint project of the Walker Art Center and the McKnight Foundation.

Beatty grew up in Brazil, Indiana and moved to south Minneapolis in 1999. He wound up in St. Paul’s Como neighborhood in 2015.

He’s a big fan of Lake Como and all that the park offers.

“My favorite thing about the Como neighborhood is how residential it is,” remarked Beatty.

“Neighbors wave across the street and chat in the alley. I love that I don’t see cranes when I look toward the horizon.”

He has started reading at Barbaric Yawp, Chris Title’s monthly reading series at Underground Music Café at Hoyt and Hamline.

Beatty recommends that aspiring poets read as much as they can and steal what they find valuable.

“Read and steal—and be as clear as you can about what you’re trying to communicate without falling into horrible cliché,” stated Beatty, who also writes marketing and advertising copy for business clients.

Beatty’s writing process involves plopping down in his living room chair with his laptop and hoping for the best, usually first thing in the morning after the coffee is started. “When nothing’s working, I crack open a book and read until I stumble upon something that inspires me,” said Beatty.

“I typically start with a single image or phrase and follow that wherever it takes me. Most of the time, I wind up telling tiny stories or jokes in my poems.”

His first poetry collection, “DUCK!” was a 100-page humor collection he self-published in 2009.

Ravenna Press in Washington published a small pamphlet-length collection called, “Earliest Bird Calls.” It includes a couple of poems that wound up in revised versions in the Coyotes collection. 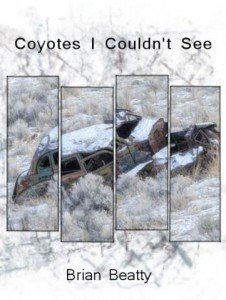 “Coyotes I Couldn’t See” (photo left of cover), was printed recently by St. Paul-based Red Bird Chapbooks (redbirdchapbooks.com). This limited edition collection includes lyric and narrative poems written and published over a two-year period. The chapbook is loosely arranged to chronicle a year’s sequence of seasons. Included poems originally appeared in print and digital publications in the U.S., Australia, Ireland, New Zealand and Scotland, as well as in digital broadsides on the website of the Walker Art Center and in Motionpoems’ 2014 “Arrivals and Departures” public art project at Union Depot in downtown St. Paul. 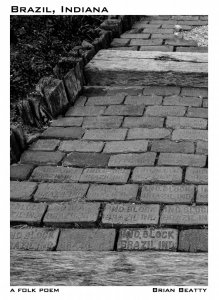 The 100-page sequence of short, 12-line lyrics pays tribute to the people and places of the poet’s rural, small town childhood years.

“It’s one long poem in the manner of John Berryman’s Dream Songs,” explained Beatty. “The book poured out in a handful of months. It started as a tribute to my late grandmother, who was my last connection to my hometown until her death last year.”

“The highlight of my poetry ‘career,’ such as it is, would have to be publishing six excerpts from the Brazil book in an Irish literary magazine. Otherwise, I sat next to the poet Robert Bly at a local documentary premiere once,” said Beatty.

“For all the jabber about nobody reading poetry these days, I’m fortunate to live in a place where there’s an audience for the work I do,” said Beatty. “It means the world to me.”