Como By The Lake seniors fighting to keep Section 8 Housing

Article and photos by CONNOR KLAUSING 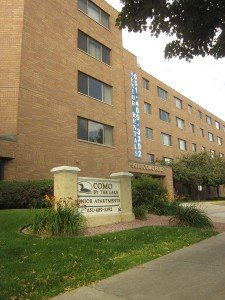 At the Como By The Lake senior housing complex, located on the south shore of Lake Como, residents are fighting to protect a Section 8 housing contract that subsidizes rent for 57 of the building’s low-income seniors.

The owners of the building, local attorney Jim Schwebel and businessman Gary Sauer, are selling the property, and have decided to let their Section 8 contract expire. If it does, previously subsidized apartments would be raised to market rate, making the units unaffordable for many of the current residents.

The move by the owners is made possible by the temporary nature of project-based housing. Under Section 8, the federal government provides financial assistance to either individuals or property owners to help reduce the cost of living for low-income people of all ages. When property owners receive money, the arrangement is referred to as project-based Section 8 housing.

In the case of Como By The Lake, the federal government provided subsidies to help pay for construction. In exchange, the owners signed a 30-year contract to provide a percentage of Section 8 housing in their building. But once a project-based contract is up, the owners have no obligation to continue the program. Residents who stay are eligible for enhanced vouchers, which would work as long as the new owners keep building a rental property.  However, if the building was converted to condos, for example, the voucher would lose its power. As a result, many tenants are left with the choice of either paying up or moving out.

For the seniors at Como By The Lake, there’s more than just housing at stake. Currently, seniors in the Como complex receive a broad array of services including nursing and health counseling provided by the North End-South Como Block Nurse Program.

Executive Director of the program Chris Langer explains, “The idea of our program is to keep seniors in their homes rather than nursing homes.” Seniors also get a daily community meal, health and exercise classes, and volunteer support. However, if units become market rate, seniors who can’t afford to stay will lose these services along with the apartment.

Another asset at stake for residents is the strong community that’s developed within Como By The Lake. “Most people that moved in here moved in with the intention of staying here,” says longtime resident Shirley Williams “Home is where the heart is, and people’s hearts are here. People love each other here; it’s like a big family.” All the residents interviewed seemed to agree—there’s a sense of community and family that goes beyond other apartments.

News of the changes at Como By The Lake first surfaced this spring. Property owners are required, by law, to give residents one year’s warning before a Section 8 contract is allowed to expire. At the Como complex, the warning letter came on Apr. 30. For residents of the community, the news was a complete shock. “After these letters I noticed how quiet it got around here,” noticed Williams. “People became worried about getting displaced. Some got so worried they became sick.” 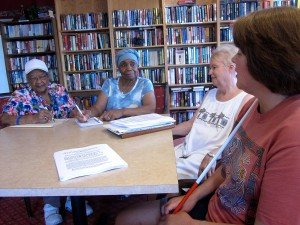 Photo left: Como By The Lake residents (L to R) Jannet Troutman Simmons, Shirley Williams, Elaine Linehan, and Laurie Richardson discuss the impact the news that Section 8 Housing will have on their community.

To address concerns among the residents, the owners sent a lawyer to answer questions at a community meeting. “But that meeting didn’t answer any of the questions we needed to know,” says resident Jannet Troutman Simmons. Rather than easing their minds, the meeting only heightened frustrations. “The attorney just repeated what was in the papers,” adds longtime resident Laurie Richardson. When I reached out to the owners, a lawyer responded, saying, “The owner is not able to discuss anything associated with the property during the pendency of the sale.”

Frustrated at the lack of transparency, a group of seniors, including Richardson and Simmons, organized the Como By The Lake Tenant’s Association. Homeline, a nonprofit Minnesota tenant advocacy organization, offered organizational support and resources for the group.

In their first action, the Tenant’s Association sent a packet of letters, information, and personal statements to the owners, as well as to local politicians and government officials. “The package explained our position and requested that the owners meet with us,” says Simmons. “We also expressed our desire to help as much as possible.” But a response from the owners never came, and most of the material was returned unopened.

For many residents, the anxiety was building. Richardson, who is blind and lives with other medical restrictions, says the prospect of finding a new place is overwhelming. “I would just sit there and cry… I cry thinking about it now,” she reflects. “Yes we can get an enhanced voucher, but if a private owner comes in and changes it to condos, we have to be out 120 days after Apr. 30, 2016. That’s the longest that enhanced voucher will keep us here.”

For others, like resident Elaine Linehan, it’s the unfairness that hurts. “We’re honest, hardworking people who have worked all our lives to educate our children, to pay our bills.” She pauses. “Now, in our later years we’re just stuck.”

The seniors have found some allies in local government. Amy Brendmoen, the city councilmember for Ward 5, has reached out to the property owners about financing tools available through the government that could help maintain the affordable senior living. “It was pretty clear from their letter that the owners were making a business decision,” she explains, “and of course, businesses are entitled to do business.” Still, she says, “There’s something here that we want to preserve, both in term of current tenants and in terms of having future affordable housing options for people to live in place as they age.”

Others, like County Commissioner Janice Rettman, hope that the next property owners can see the seniors as an asset to their community. “In the best scenario, the next owner will see the people there as value added,” says Janice hopefully. “They’ve added a lot to this community, and continue to add to this community. Really, they’re the biggest commodity.”

Although Simmons’ attention is focused locally right now, she also has hopes that the struggle in Como can help others organize nationwide. “I said, ‘What we need to be doing here is to gather our information to come up with a program that people in other places in other parts of the country can follow.’ I would love for us to have a St. Paul plan,” she says with a laugh. Then, more seriously, she adds, “People can’t fool around and wait because there are no laws protecting us.”