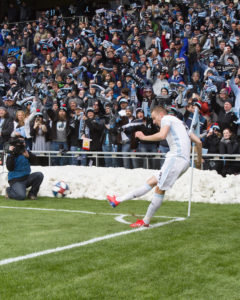 As the first season of Major League Soccer ends in St. Paul, Allianz Field neighbors are reviewing traffic and parking issues as well as potential changes. Ideas are raised with an eye toward improvements before games start in 2020.

Hamline Midway Coalition is looking at issues, with a discussion planned at its November Transportation Committee meeting.

Union Park District Council (UPDC) Transportation Committee members weighed in in September, with a discussion at its October board meeting about the University of St. Thomas-St. John’s University game Oct. 19. It was the first football game played at the new stadium.

Soccer, for its part, ended the regular season Sept. 29.

Area district councils have heard complaints about spillover parking and traffic. Hamline Midway Coalition Executive Director Kate Mudge said complaints have also been received about police not responding to calls about illegally parked vehicles. That’s an issue the district council will take up in November. Requests for residential permit parking are also expected to move ahead.

What happened this season

Pre and post-game periods resulted in heavy motor vehicle traffic on arterial and neighborhood streets, with traffic tie-ups north and south of University Ave. For the most part, a post-game rush meant that most fan were out of the area about an hour after games ended. Trains and buses have been full all season, and sidewalks filled with people walking to and from games.

Changes were made as the season went on to deter cut-through traffic in some locations, open business access to Midway Center and Midway Marketplace, and improve pedestrian safety along Snelling and University avenues. Changes were made to better direct pedestrians at Snelling and Spruce Tree Drive. Some temporary barriers around the stadium will be replaced next year with permanent structures and landscaping. Traffic on neighborhood streets won’t be affected.

The city’s plans for parking and traffic control on game days worked well for the most part, said St. Paul Police Department Commander Kurt Hallstrom. Hallstrom, who was recently moved to the police department’s East District as a senior commander, agreed to continue working with West District police during the soccer season. Someone else will lead police-stadium efforts in 2020.

Observations from 2019 will inform a planned advisory committee. Mayor Melvin Carter’s office recently asked the two district councils and other groups to appoint representatives to the Allianz Field Traffic Management Advisory Committee. The final stadium traffic mitigation plan, which was called for in a 2016 alternative urban areawide review or AUAR, included the establishment of the committee of public and private stadium stakeholders. The advisory committee is to make recommendations concerning potential modifications to the traffic management plans over time.

According to information from Carter’s office, the committee will work with Metro Transit to evaluate the feasibility of continued operation of Green Line LRT and A Line operations at peak frequencies or 10-minute headways through end-of-event departure periods, availability of three-car trains through end-of-event departures, and availability of supplemental and regular-route transit during stadium events. The group will look at how riders get on and off transit vehicles, and how travel patterns will change as the Midway Center site is redeveloped.

Ongoing traffic monitoring to watch traffic growth and operational issues, and suggestions for change could also come out of the advisory committee. The group will be charged with filing an annual report and recommendation for changes with city officials by Nov. 30 every year.

The group will be in place through the end of 2021. It will meet at least twice annually.

The 15-member group, which is to be appointed by Carter and approved by the City Council, will include representatives of police, public works and planning and economic development; Ramsey County Public Works, Metro Transit, Minnesota Department of Transportation, federal highway Administration, Minnesota United FC, Midway center owners RK Midway, Midway Chamber of Commerce, Hamline Midway Coalition, UPDC, a Ward One resident, a Ward Four resident and at at-large citizen appointment of the mayor to serve as group chairperson. The soccer team and Midway Center would each have two representatives; other entities would have one representative apiece on the group. The group would meet at least twice annually.