Coaches walk alongside youth to keep them out of prison 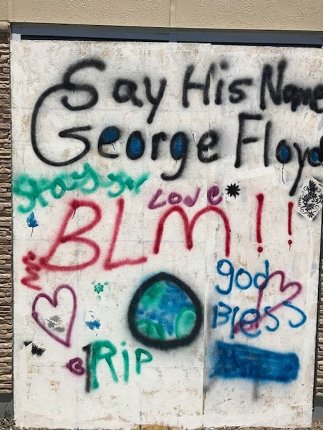 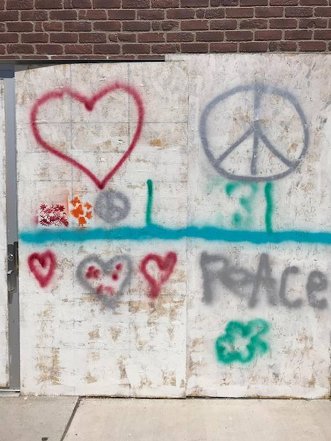 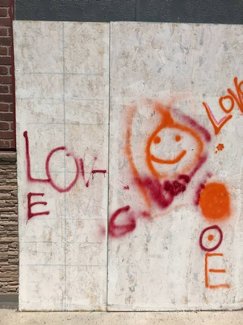 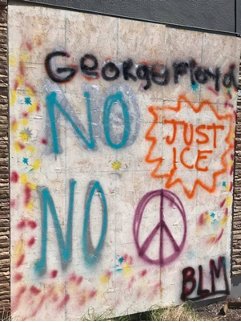 Youth in Model Cities created art on the side of the Victoria Theater Arts Center after the murder of George Floyd. | Submitted Photos by Crystal Vital-Schwartz
Previous Next
Posted Thursday, January 14, 2021 9:08 pm
PARTNERSHIP

Bryale Winters, joined by his colleague, Crystal Vital-Schwartz, knocked on the door of a 16-year-old youth’s house for their initial meeting. As the youth’s community coach, Winters’ job was to help him find a job and figure out his goals.
But when they showed up at the house, the youth wasn’t there. His aunt was there as the trusted adult required to attend the initial meeting.
“Let’s go find him,” the aunt said.
Vital-Schwartz and Winters went back into their car and began to follow the aunt around the neighborhood.
“We’ll get this face-to-face, but sometimes it does take a while,” Vital-Schwartz told Winters. She knew that Winters had experience working with young people and understood it would take time for the 16-year-old to be ready to trust the coach.
After checking a friend’s house, they started to drive back to the youth’s house.
Two teens were walking down the street, and the aunt’s car stopped. She leaned out the car window. “Hey! We’re looking for you!” she called.
Vital-Schwartz’s car pulled into the parking lot after the aunt.
“Give me a couple of minutes,” Winters said.
Vital-Schwartz watched as Winters chatted with the youth, starting a connection.
Vital-Schwartz is the Youth Services Manager for the Juvenile Detention Alternative Initiative (JDAI) program where Winters also works. Launched in 1992 by the Annie E. Casey Foundation, JDAI is a part of Model Cities, a nonprofit organization that helps Frogtown residents in various ways, which include food drives and mentorship programs.
In the JDAI program, specialized community coaches with a wealth of backgrounds are tasked in providing supervision to youth who have had previous offenses. Their goal is to minimize the risk of re-offenses and to help the youth complete their court ordered obligations, finding educational opportunities, and making the necessary referrals for further assistance. Being able to connect with the youth as a mentor becomes essential for these coaches.
“We do know that every positive interaction they’ve had in every kind of positive adult relationship that they have in their life is actually helping their brain to develop into a stronger, more resilient brain,” Vital-Schwartz said.
In his experience as a coach, Winters knows that there isn’t a typical candidate among the youth. There are kids in group homes, kids with both parents, and kids with one parent, etc.
“A lot of these kids, they’ve come from places where they can’t trust too many people, and they’re not open with how they feel about things,” Winters said. “So that’s the biggest thing, for me, is just seeing a kid wanting to talk to you about certain things, wanting to do better than their circumstances that they have.”
In Winters’ initial meeting with the 16-year-old, he had to let the youth know that community coaching is not a consequence. He was not a probation officer; he was to be a mentor.
“What a community coach is, is really an advocate for the youth,” said Kizzy Downie, chief executive officer of Model Cities.
On a typical day with a youth, Winters spends one to four hours talking with the youth and getting something to eat. The length of time of coaching also varies, from six months to over a year.
“It really is individualized for each young person,” Vital-Schwartz said. “I think that’s the beauty of our program; it’s there’s not like one size fits all.”
Coaching comes with challenges. Winters said he has had an experience where he lost contact with a youth for a few weeks. It can be difficult to interact with the youth via virtual calls because some families do not have access to wifi.
Vital-Schwartz also works with coaches to get teens access to other things they need, such as dental care and driver’s education classes.
“The model for community coaching is that it takes a village to make sure youth and children have what they need,” Downie said.
JDAI works with Ramsey County, where probation officers refer juveniles on probation to community coaching. This kind of partnership has produced positive results. Based on Annie E. Casey Foundation’s 2017 report, detention admissions in Ramsey County have dropped by more than 70%.
JDAI under Model Cities aims to break the negative long-term effects of incarceration, especially for youth of color, who have historically been overrepresented under the judicial system. According to the Annie E. Casey Foundation’s JDAI Deep-End Initiative 2020 report, national data show that African American youth are four times more likely to be in custody compared to white youth.
JDAI’s Deep-End Initiative was launched in 2014 to further the goal of juvenile justice system reform. It aims to reduce confinement for youth of color and fight the “deep end” of the system where the youth will find it difficult to get out. Ramsey County reduced the deep end placements by 60% since 2014, and African American youth accounted for 91% of this change, according to the JDAI Deep-End Initiative 2020 report.
“What you’re doing is supporting young people because our systems are not designed for our young people, and they’re especially not designed for our young people of color,” Vital-Schwartz said.
Model Cities’ JDAI program is funded by Ramsey County, Youthprise and the Minnesota Department of Employment and Economic Development. The latter focuses on activities that support youth in obtaining employment skills. Even though the age range the JDAI supports is 10-21, the normal age range is around the ages of 15 and 16, since that is a prime age for young people to begin looking at employment and career opportunities.
While it takes lots of time and efforts during the mentoring process, some success stories have kept the coaches moving forward. Winters said the 16-year-old youth he had helped became an encouragement. After Winters helped him find a job and organize goals, such as establishing a routine to exercise at the gym more regularly, the youth eventually got a job at Chipotle in November 2019.
On the youth’s first day of work, he sent his coach a selfie of himself in the uniform.