News for everyone, delivered to everyone
Downtown Longfellow two years later 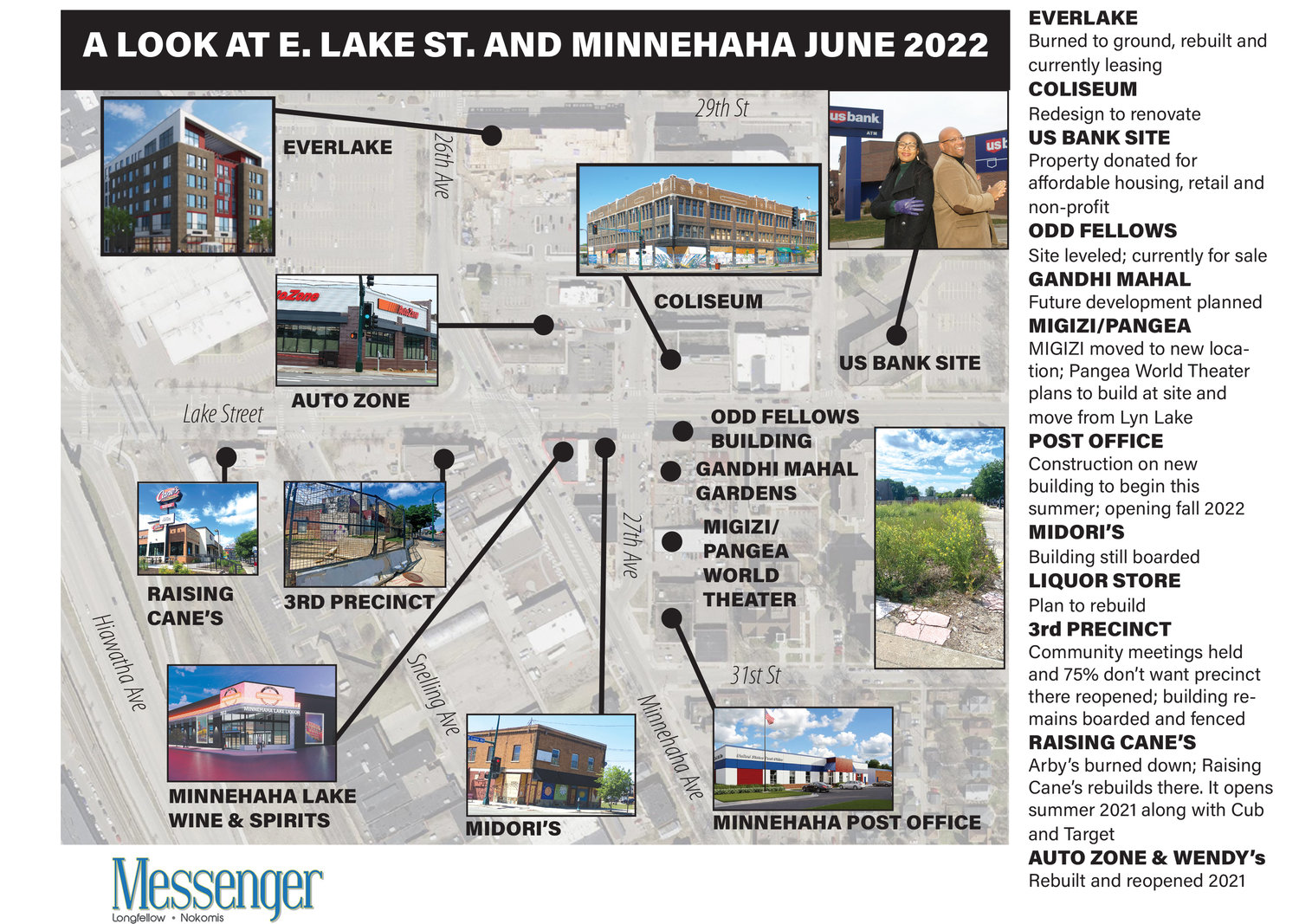 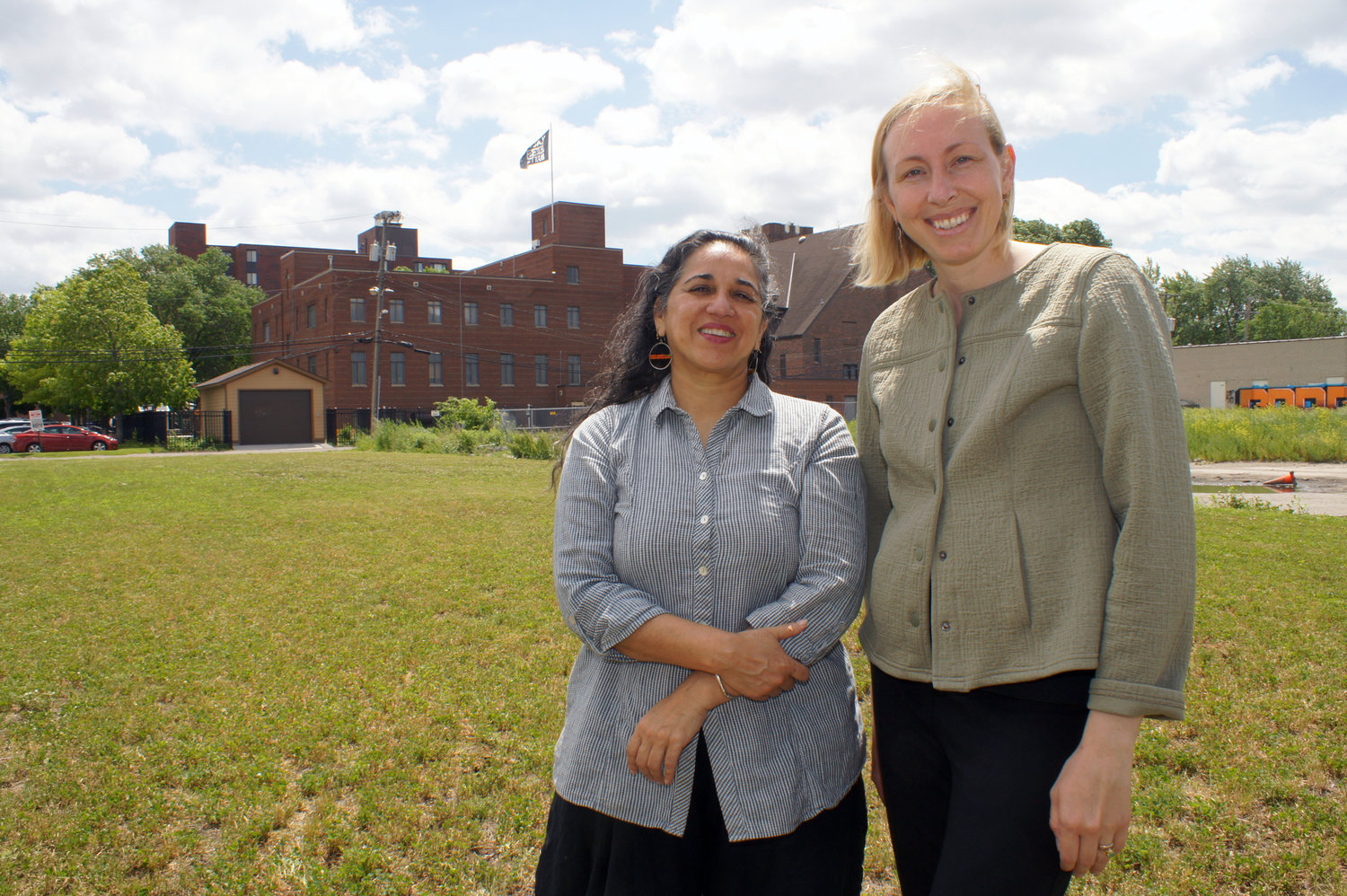 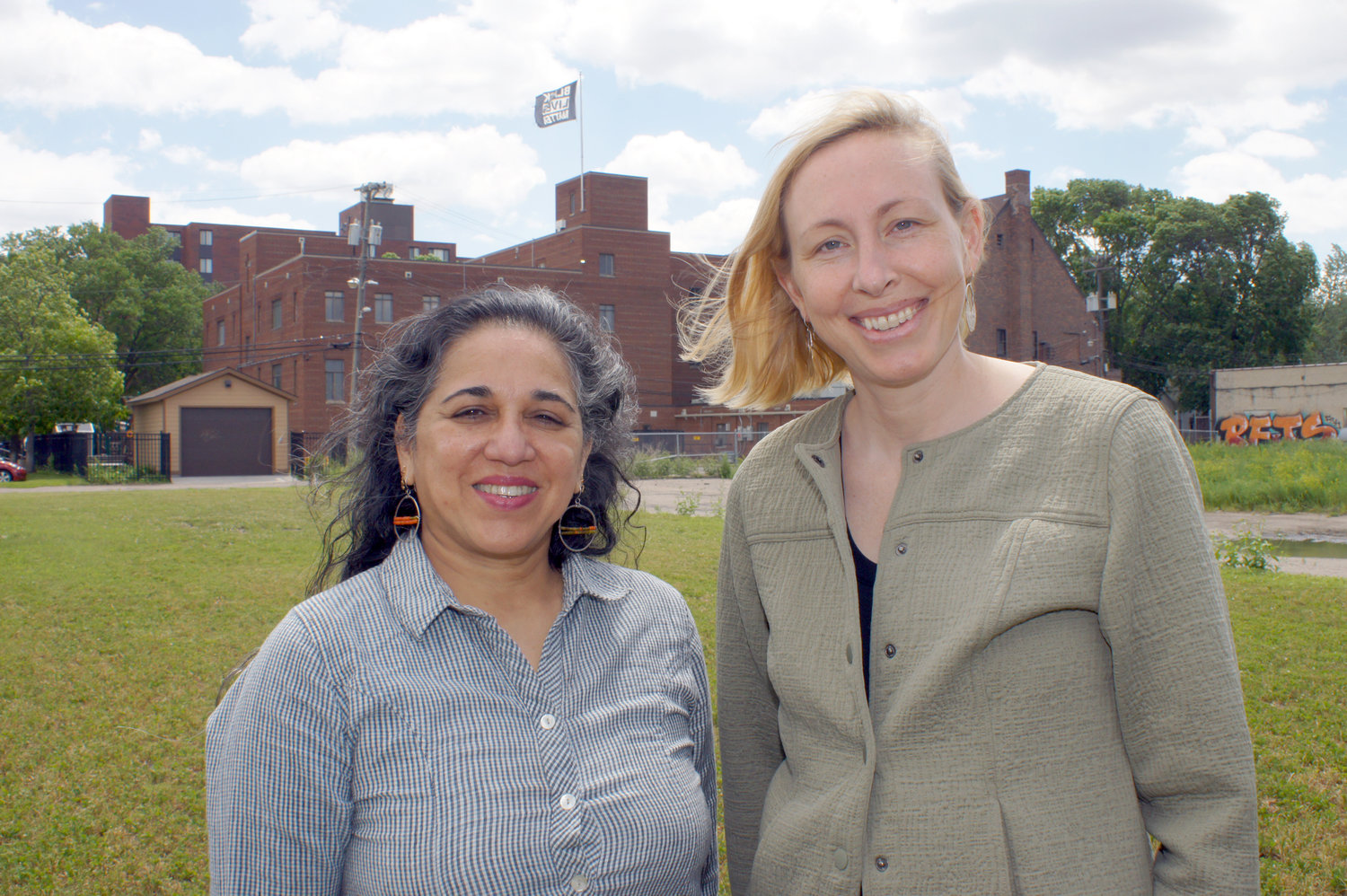 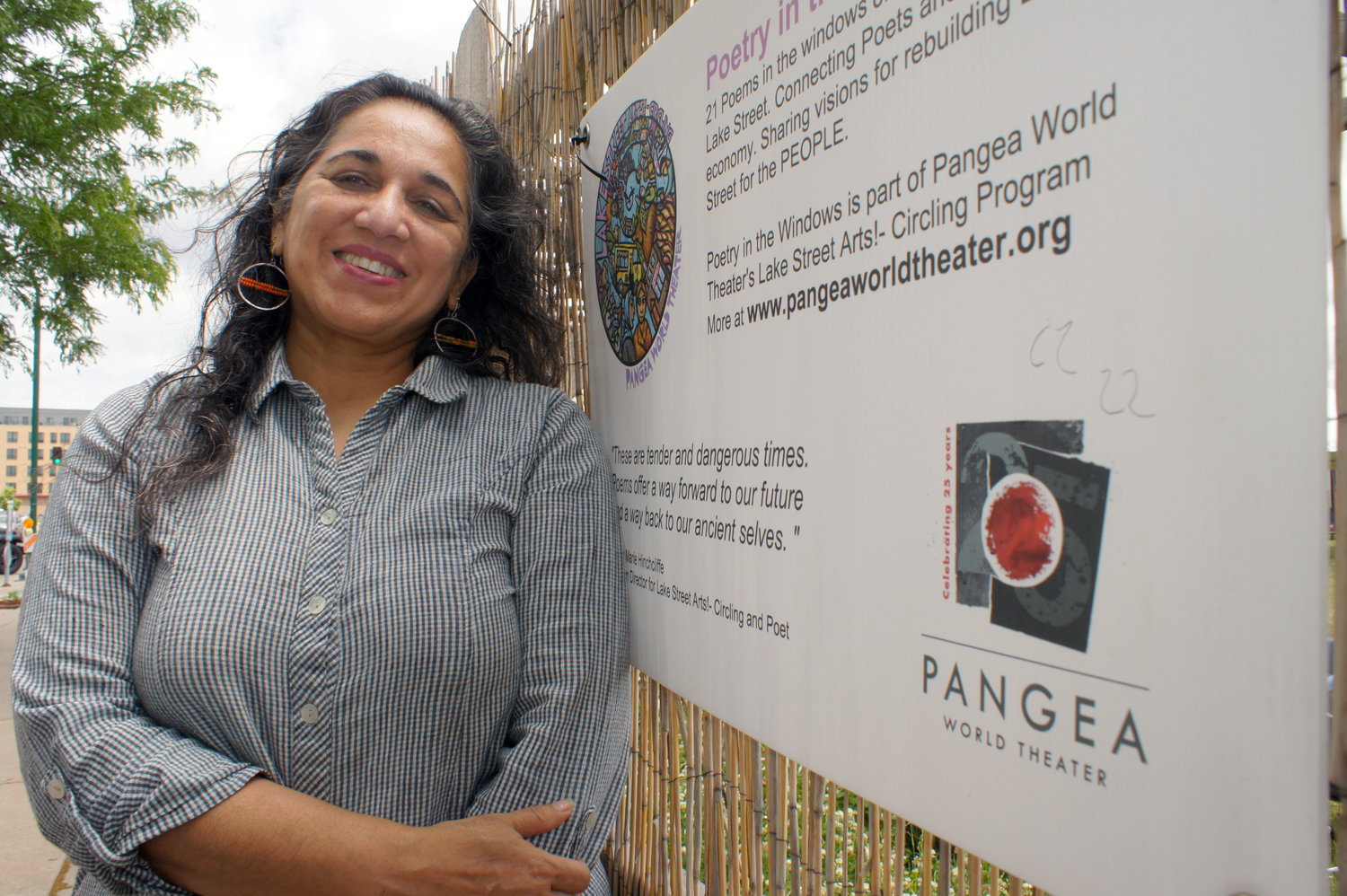 Meena Natarajan stands at the future site for the Pangea Theater on the 27th Ave. block between Lake and 31st Street. (Photo by Terry Faust) 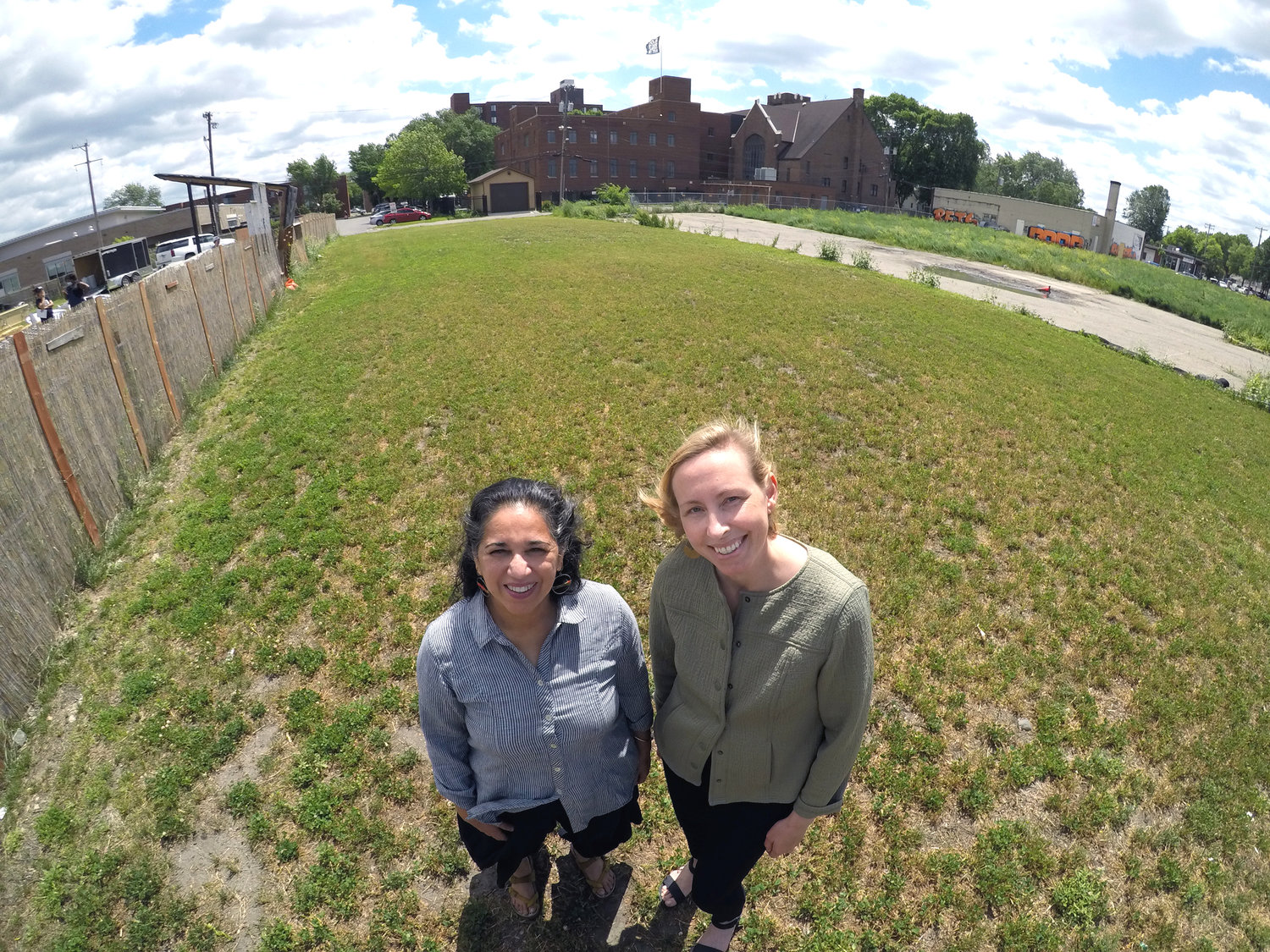 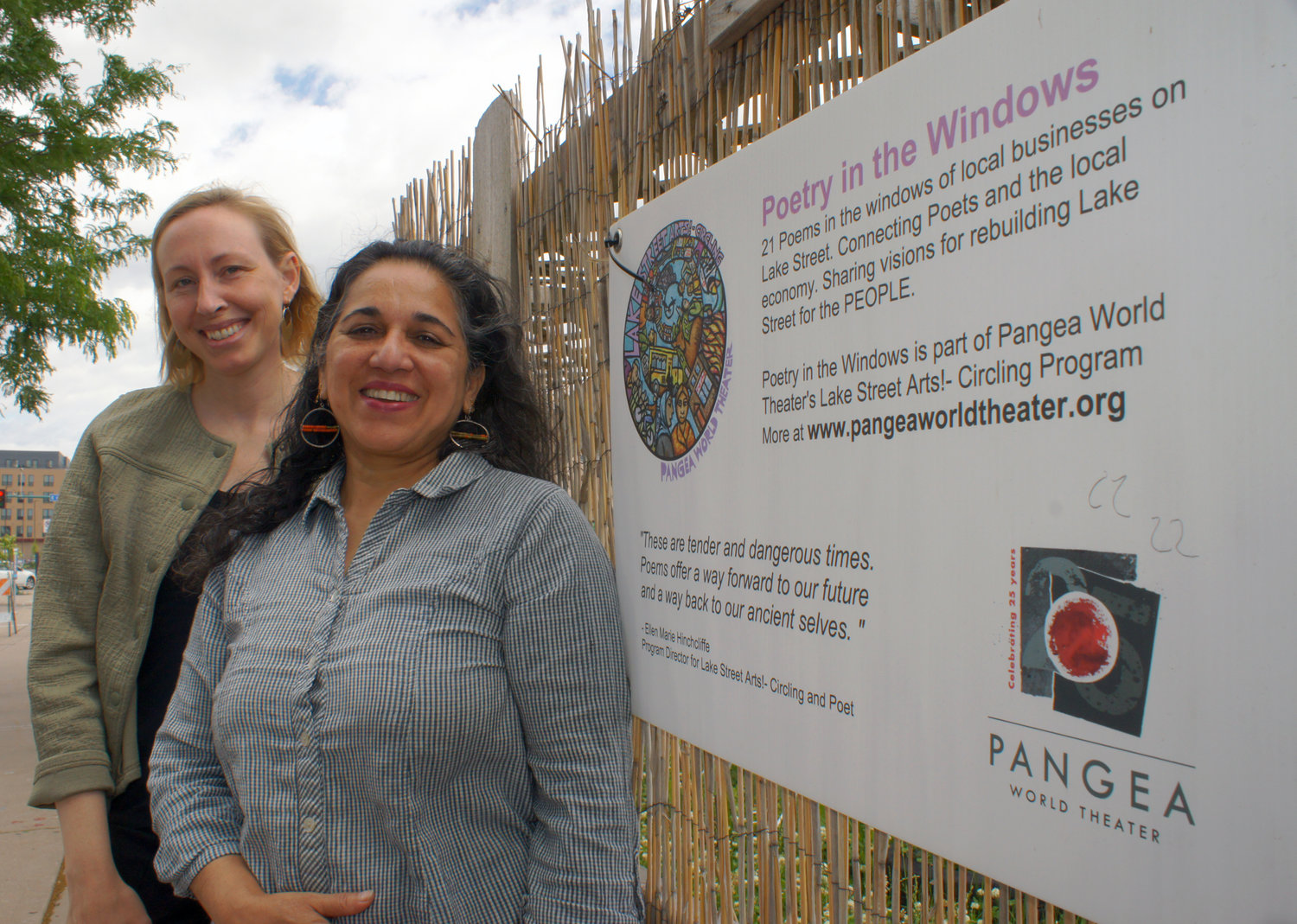 Meena Natarajan (left) and Ingrid Rasmussen stand at the future site for the Pangea Theater on the 27th Ave. block between Lake and 31st Street. (Photo by Terry Faust)
Previous Next
Posted Sunday, June 26, 2022 12:19 pm
By Iric Nathanson

The 27th Avenue block between Lake and 31st Street in Minneapolis bustled with community life. The block included a Latino night club, a popular Indian-Bangladeshi restaurant, and a community organization serving Native American youth. But that was before George Floyd’s murder in 2020, and the civil unrest that destroyed much of downtown Longfellow, including the block on 27th Avenue.
Now, two years later, Meena Natarajan hopes to breathe new life into this key Lake Street commercial node. Natarajan plans to relocate the Pangea World Theater, which she heads as executive director, from its current home in Lyn Lake to the largely vacant 27th Avenue block.
Natarajan’s organization seeks “to build bridges across multiple cultures and creates sacred and intersectional spaces,” according to the group’s website. “Through art, theater and creative organizing, we strive for a just world where people treat each other with honor and respect. We believe that artists are seers giving voice and language to the world we envision.”
While construction of Pangea’s new center is still several years away, the foundation for this promising project has already been put in place. The arts group has created a unique partnership with Holy Trinity Lutheran Church, located down the street from the proposed theater site.
Prior to the events of 2020, the site served as the home for MIGIZI, a Native American social service agency. “Holy Trinity has had a long history with MIGIZI,” explained Ingrid Rasmussen, the church’s lead pastor. “We have partnered with their organization on a wide range of efforts. When MIGIZI decided to move farther west on Lake Street, they told us they wanted to keep the ownership of their parcel within the BIPOC community.”
Rasmussen and her congregation knew there were outside groups interested in the property so Holy Trinity decided to purchase the site. “Everything had to happen quickly,” Rasmussen said. “There was no time to put together a pre-development plan. We at Holy Trinity decided that we could act as a short-term land bank for the site, in order to keep it in community hands. We purchased the property and are holding it for Pangea until the theater is ready to move ahead with its development project.”
Rasmussen and Natarajan had connected through Longfellow Rising, a new organization working to revitalize 27th and Lake. “Pangea has been in involved is the 27th and Lake community for quite a while. We have staged performances at the Hook and Ladder so we know the community.” Natarajan said. “After getting to know Ingrid through Longfellow Rising, we realized that our two organizations were a good match. That our partnership came together so quickly says a lot about the church and its commitment to social justice. It also says a lot about Ingrid, who she is and her leadership abilities.”
Natarajan says that Pangea’s new facility on 27th Avenue will have multiple uses. “We want it to be a living building, a building that reflects the ideals of environmental justice and social justice. We will have a performance space, but we want to do other things. We want to grow food and make the center a community gathering place with a coffee shop.
“During our 26-year history, social justice has always been a key principle that guides our programming. We are particularly interested in expanding opportunities for theater directors who are women and people of color. Those groups have historically been under represented in the ranks of performance directors. Poetry displays in the windows of shops along Lake Street is also one of our projects.”
Pangea is currently involved in predevelopment for the new downtown Longfellow center. “We are doing the visioning that will help us design a building that will meet our multiple needs. At the same time, McKnight Foundation is helping us set up a capital campaign. We don’t yet have a fund-raising goal. That is something that the predevelopment process will help us determine. The design of our project should be completed this fall, and then we will launch the capital campaign. It will probably take us an additional two to three years before we are ready to begin construction.”

Gandhi Mahal not returning
Two other vacant properties on 27th Avenue are still awaiting development. Ruhan Islam continues to own the site where his Gandhi Mahal restaurant once stood before it was destroyed during the civil unrest. Islam is working on plans for the property, but he says that Gandhi Mahal is not coming back. “Fine dining is no longer affordable,” he explained, “so we are developing a new concept for a food court as an alternative to a stand-alone restaurant. We want to bring back all those flavors that people enjoy, but do it in a way that is more affordable.” Islam says that his new venture, Curry in a Hurry, now located on East Franklin, could be one of the occupants of the new facility.
Islam knows he will face serious challenges when the time comes to put together a financing plan for his ambitious development. “Building costs are rising rapidly,” he noted. “Projects that cost $300 per square foot to build just a few years ago are now facing costs that are double that amount. We will need to collaborate with our community partners to make this project happen.”

Odd Fellow building for sale
At the corner of 27th and Lake, Ade Alabi has decided to sell his vacant site. Alabi purchased the historic Odd Fellow building at that intersection only months before the building burned to the ground following the murder of George Floyd. “To move ahead with a development on that site would cost at least three times what I paid for the property,” Alabi said. “That is a financial risk I am not able to take. I am hoping a community-based developer will come forward to purchase the property. I would like to see this corner maintained as a community asset, if at all possible.”

Dream there, funding isn’t
While firm redevelopment costs for the 27th Avenue projects are not yet available, Ingrid Rasmussen knows the price tag will be substantial once the numbers come in. “I can say without hesitation that there needs to be a major influx of funding to make the dreams on that block become a reality,” she said. “The dreams are there and the will to make something happen is there, but very little funding has made its way into these projects, at least as of today.
“There was strong BIPOC ownership energy on that block prior to the uprising. As a community we need to do what we can to make sure that vitality returns to the block and continues to grow. Downtown Longfellow at 27th and Lake is one of Lake Street’s important cultural and economic hubs. We need to make sure that hub revives and flourishes.”