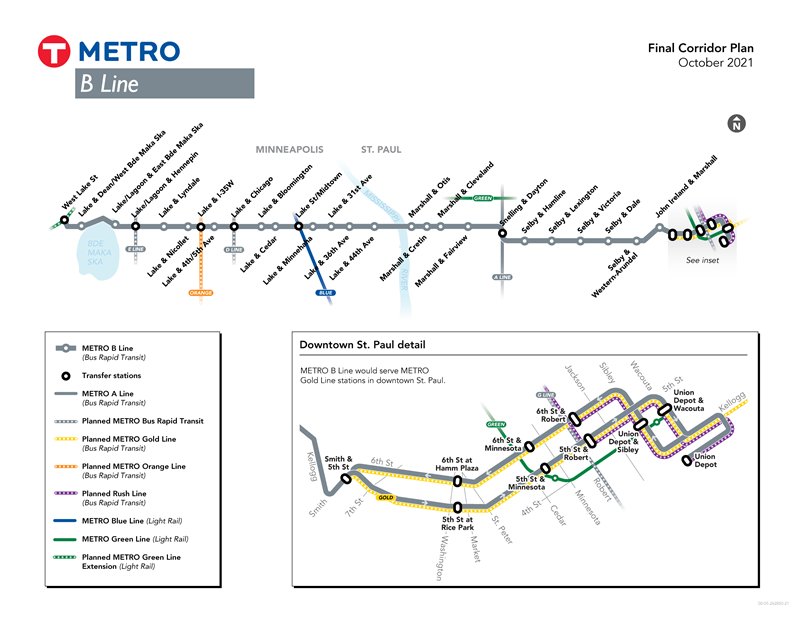 B Line bus rapid transit service is to start in 2024, providing a faster connection between St. Paul’s Union Depot and Uptown Minneapolis.
The $65 million project’s final corridor and station plans won a unanimous Oct. 13, 2021 vote of support from Metropolitan Council. The B Line route will follow Minneapolis’ Lake Street and Selby and Marshall avenues in St. Paul. It will largely replace Route 21, Metro Transit’s second-highest ridership bus route.
The B Line will provide connections to Green and Blue Line light rail, and five other current and future bus rapid transit routes.
Engineering can get underway and continue until late 2022. Construction starts in 2023 and ends in 2024.
Bus rapid transit has fewer stops than regular route bus service. The B Line will have a total of 33 stops. Buses will run every 10 minutes. Stations or platforms have amenities including real-time schedule information, lighting, heat and emergency contact capability.
Metro Transit will replace some regular route bus service along Route 21 in Minneapolis, but with less frequency at buses every 30 minutes. A new Route 60 is planned to operate along Selby and provide access to Midway shopping destinations once the B Line starts operations.
Not everyone is on board the B Line, including a group of residents in Lexington-Hamline neighborhood. They question using Selby and not Marshall for the route between Hamline Avenue and Lexington Parkway, mounting an unsuccessful petition drive for a route change. One family has already put its house up for sale, not wanting to live next to a transit station.
The Lexington-Hamline group contends there was a lack of involvement for their neighborhood and its neighborhood association, Lexington-Hamline Community Council. Their objections include having large, lit bus platforms close to homes, Selby’s narrow winter driving conditions when snow isn’t cleared to the curb, and more traffic. They also question how buses will make the turns at busy Selby and Snelling avenues. Buses will use the A Line bus rapid transit stations at Snelling and Dayton avenues. Metro Transit staff said those issues have been studied, and that test bus runs show the buses can make the corner.
Council Member Kris Fredson, whose district includes area neighborhoods, praised the B Line project. “The B Line will be the next game-changer for transit in Saint Paul, providing faster and more reliable service from the Union Depot in downtown Saint Paul to Uptown Minneapolis, along Selby, Marshall and Lake Street.”