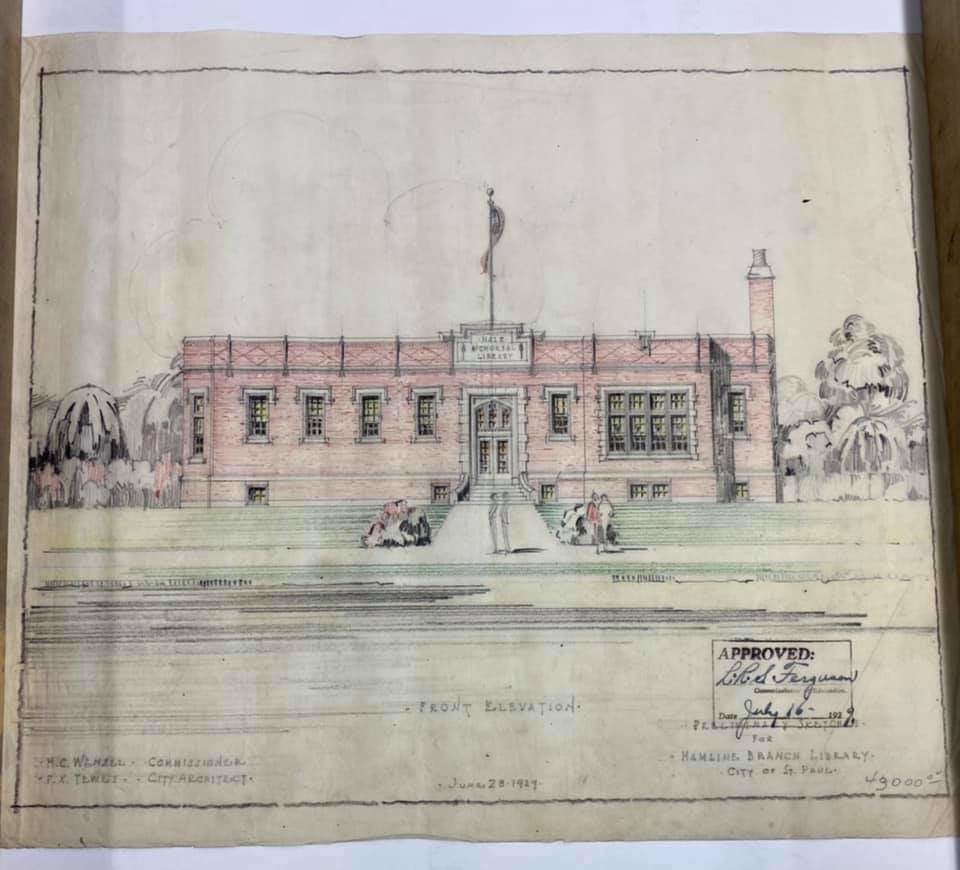 Three Saint Paul library branches, Hamline Midway, Hayden Heights, and Riverview, none of which have been renovated in more than 30 years, sought library improvement funds for needed upgrades. Of the three libraries, the Hamline Midway Library is the only library considered for demolition. Mayor Carter presented his 2022 proposal that supports an $8.1 million investment for the library that will fund one of two options, “renovation and expansion” of the existing library or the “development of a new one.”
The use of property tax revenue predicated on demolition is contrary to preservation goals expressed in Saint Paul’s 2040 Comprehensive Plan, which says that “Saint Paul strives to be a leader in the use of best practices towards an equitable and sustainable approach to the conservation, preservation, rehabilitation, restoration and reconstruction of PUBLICLY-OWNED (emphasis mine) historic and cultural resources.” Saint Paul’s own Heritage Preservation Commission (HPC) has recommended that the building be preserved.
The HPC was created in 1976 to protect historic resources after St. Paul’s citizens and leaders witnessed the devastating impact of the I-94 construction on the Rondo neighborhood, the demolition of the famed Ryan Hotel and the near-loss of the beautiful Federal Courts Building – now the Landmark Center in downtown Saint Paul.
Demolition of the Hamline Midway Library building should never have been an option for library improvement funds, let alone the preferred and heavily promoted option of the SPPL Director and her allies, as was revealed in Jonathan Oppenheimer’s carefully researched Op-Ed “SPPL leaders mislead on Hamline Midway library” that printed in the October Monitor.
Through his records review, Oppenheimer learned that library leadership has been working to create the appearance of following the comprehensive plan, while aiming all along to tear down the historic building. No doubt they will point out needed – but until now, ignored – maintenance and ADA compliance as a sure sign that the building is crumbling. However, there is no evidence that historic architects and structural engineers were consulted who would have deemed the library not saveable.
Demolition of a historic building should always be the last resort, and then only after all options have thoroughly been explored. Demolition should never be the first choice. Alternative suggestions from the community were quickly dismissed, rather than being explored. These included a co-location concept or relocating to a larger site. A city planner from St. Paul’s Planning and Economic Department recommended an alternative site, an option that would preserve the building, in an internal email dated March 31, 2021.
“…there are a lot of vacant/underutilized residential properties on Snelling, especially between Thomas and Minnehaha. If a way could be found to both reuse the existing library building and rehab or construct new on one of those properties to create a multi-building campus, I think it would provide much greater community benefit than demoing and building a new building on the current site.”
High quality libraries in historic buildings exist across the nation and in St. Paul. The George Latimer Central Library, built in 1917, has gone through two major renovations and remains one of St. Paul’s most historic structures. In 1999, the historic St. Anthony Park Library added a beautiful, well-integrated rotunda to gain a dedicated space for their children’s collection. That library continues to be the gem of the neighborhood.
Historic preservation is more than saving historic buildings. It is also about saving the building’s own history for future generations to view, contemplate and enjoy. A renovated historic Hamline Midway Library will be transformative and enjoyed by future generations, both as a library and for its history.

The Season of Giving