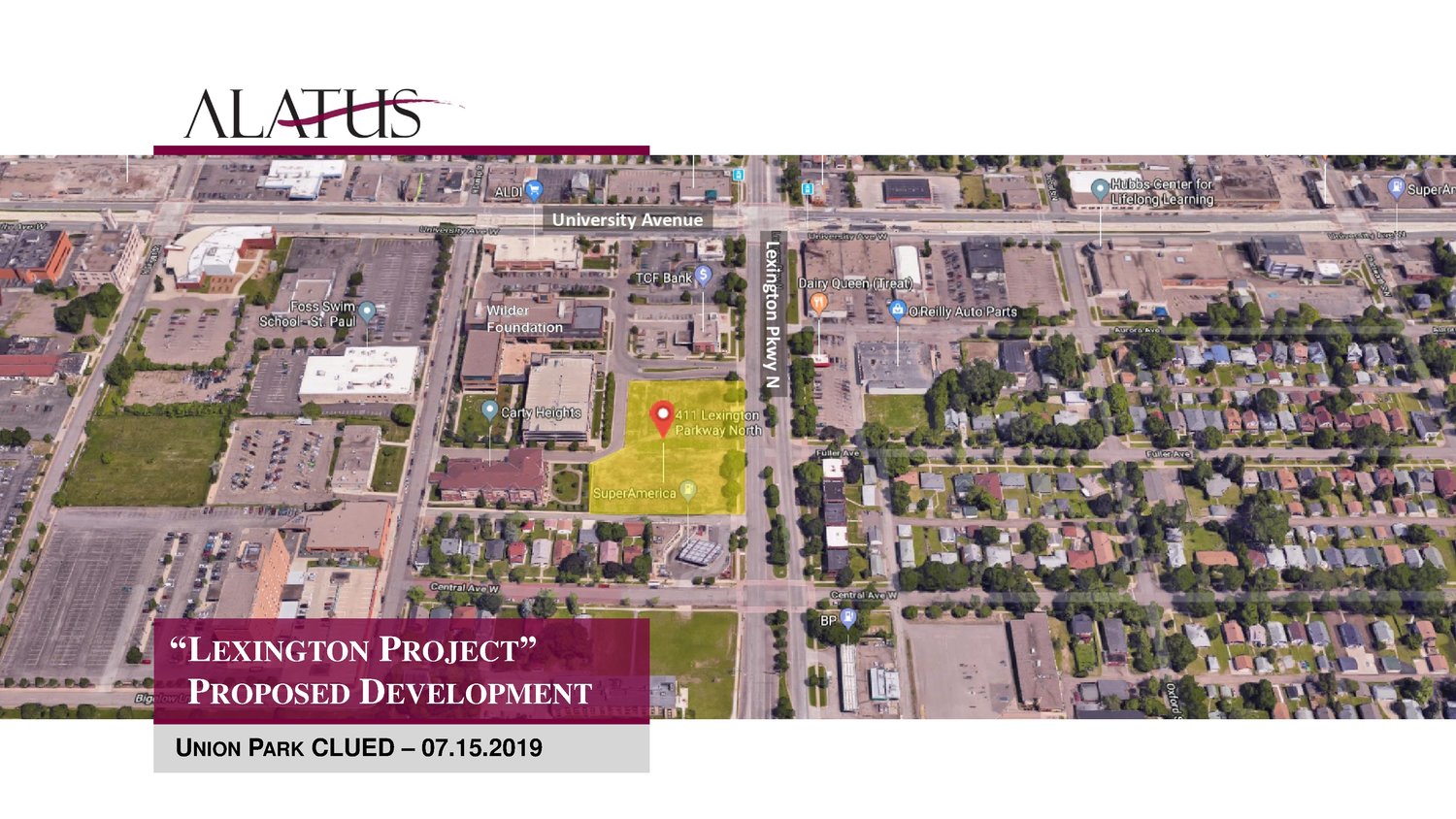 Developer Alatus’ Lexington Station mixed-use project is in the hands of the St. Paul City Council, with a public hearing and likely vote March 17 on its site plan. The Minneapolis-based developer is appealing an 8-7 Planning Commission vote in February to deny the site plan.
Lexington Station has become a flash point in debate over affordable housing, gentrification and neighborhood character. Opponents have argued that project doesn’t meet city comprehensive and neighborhood plans, and claim that it would negatively impact the surrounding neighborhood. Supporters counter that the project is in an area already zoned for traditional neighborhoods 4 high density, and that there is no legal reason for the city to reject the site plan.
Area district councils have taken opposing views. The Union Park District Council (UPDC) land use committee Feb. 22 voted to recommend approval of the $59 million project. Summit-University Planning Council (SUPC) Feb. 23 reaffirmed a 2019 position of opposition. SUPC and Frogtown Neighborhood Association are among the groups leading the charge against Lexington Station.
The six-story Lexington Station at 411-417 S. Lexington Parkway would have 288 residential units, 3,000 square feet of ground floor commercial space and 254 structured parking spaces. Its apartments include alcoves, studio, one and two-bedroom units, and four-bedroom units. Fifty percent of apartments would be affordable to families at 60 percent of area median income.
“If your family income is $35,800 we will have a space saved for you,” said Chris Osmundson, director of development for Alatus. He met with the UPDC committee Feb. 22.
Osmundson said project planning was slowed in 2020 due to the COVID-19 pandemic. The project was reviewed at five UPDC meetings in 2019. Meetings were held at Wilder Foundation headquarters, adjacent to the development site. Wilder owns the development site and has been trying to sell it for several years.
Lexington Station would be located in Union Park’s planning district, but would be adjacent to the planning districts for Summit-University, Frogtown and Hamline-Midway. District councils from those neighborhoods were invited to the meetings. But there was criticism in 2019 that meeting notices and neighborhood fliers were received just prior to meetings.
During the 2019 review period UPDC land use committee members made a number of recommendations on development plans, but never took a formal vote on the site plan itself. Land use committee members said Feb. 22 that the project is in their planning district and they need a say.
“The development is in the Union Park boundaries,” said committee and district council member Scott Berger. “It’s incumbent on us to take a position. I think we should be the first and foremost voice on this.”
UPDC board and committee member Dan Elenbaas said he and his Lexington-Hamline neighbors who walk to Green Line light rail are eager to see development on the site. “Everyone I talk to is looking forward to having something there.”
“If our expectations are sky-high, we will never get anything built here,” said committee member Rob Vanasek.
UPDC is encouraging Alatus to consider offering some apartments at 30 percent of area median income and is asking city officials to reconsider assisting the development. Osmundson didn’t reject the request but said Alatus met with city leaders earlier about public assistance. “That has not been fruitful,” he said.
In 2019 Alatus turned down a $1.25 million Metropolitan Council transit-oriented development grant in the face of community opposition.
For SUPC, the talk of apartments affordable at 60 percent AMI isn’t enough. Board members said Feb. 23 that there hasn’t been enough community involvement in the project planning process. They reiterated fears about gentrification and a development that won’t serve the surrounding community.
“We had these concerns in 2019 and we have them now,” said SUPC board member Jack Hennen.
UPDC land use committee members said they support the goal of affordable housing. But St. Paul currently doesn’t have inclusionary zoning, which would require developments to have a percentage of affordable units. Developing inclusionary zoning regulations is a 2021 Planning Commission priority.
One sticking point in the debate is affordability and how that is measured. Regionally the area median income for a family of four has been stated at $41,000 to $85,000, depending on the source. Minnesota Housing Partnership has estimated the median for St. Paul for $64,000. For the adjacent neighborhood of Frogtown, the data-gathering project Minnesota Compass has put that at less than $40,000. Some commissioners expressed frustration in how income and affordability are measured.
Site plan foes said the demand for affordable housing is consistent with the city’s comprehensive plan. The plan, prepared once every decade, outlines goals including issues including housing. Commissioner Adrian Perryman cited comprehensive plan language calling for “equity, sustainability and affordability.” “I think the long-term effects of this development will negatively affect the community more than any positive impact it might have,” he said.
But other commissioners said there is no legal reason to deny the site plan. Planning Director Luis Pereira and Assistant City Attorney Peter Warner said they see no legal rationale under which the city can deny the site plan. Warner said that while the comprehensive plan contains goals, the city lacks controls such as an inclusionary zoning ordinance that would allow for goals to be put in place.
Inclusionary zoning ordinance require that a set share of new to be affordable by people of low to moderate incomes. Planning commissioners have called for development of such a zoning ordinance.
Having a site plan go before the city council is unusual in St. Paul and only happens on appeal. Site plans are typically reviewed and approved by city staff, but longstanding controversy over the Alatus project prompted city staff to send the site plan to the Planning Commission. The 365-page site plan application is highly technical.
City staff recommends approval of the site plan with several conditions. One is that the final landscaping plan win approval from the city forester. Sewer plans and technical details shall be approved by the Public Works Sewer Division. A traffic impact study shall be accepted, and the plans be approved by Public Works Traffic Engineering. The final utility plan shall be approved by St. Paul Regional Water Services.