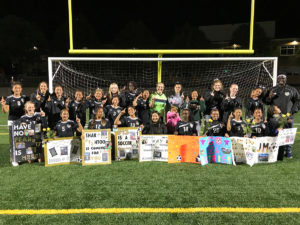 The Como Park Cougars girls’ soccer team captured the St. Paul City Conference Championship with an undefeated 6-0 conference record. They clinched the title with a victory on Senior Night, held at Como on Sept. 25. (Photo by Eric Erickson)[/caption]

The National Advanced Placement (AP) Exam results administered by the College Board in 2019 were released to school coordinators in September. The information revealed that Como students earned hundreds of college credits. AP scores are categorized on a five-point scale for each test taken in a specific subject, with colleges and universities generally awarding credit for scores of 3, 4 or 5.

The AP Scholar with Honor award is granted to students who earn an average score of at least 3.25 on all AP exams taken, and scores of 3 or higher on four or more of these exams. Como AP Scholars with Honor include: Sunniva Berg, Carter Brown, William Farley, Elijah Frese, Naddi Jillo, Joseph Newman, Lila Seeba, Mira Seeba, and Emma Wolters.

The AP Scholar with Distinction is granted to students who receive an average score of at least 3.5 on all AP exams taken, and scores of 3 or higher on five or more of these exams. Como AP Scholars with Distinction include: Aiyanna Aeikens, Henrie Friesen, William Gray, Chloe Hollister-Lapointe, Jackson Lee, Celia Olson, Eloise Rein, Mason Salverda, Peter Schik, Antero Sivula, and Marco Tabacman.

National AP Scholar is a classification granted to students in the U.S. who earn an average score of at least 4 on all AP exams taken, and scores of 4 or higher on eight or more of these exams. Como’s National AP Scholars are Isaac Harker and Alistair Pattison.

Como’s long-established AP program continues to challenge and support students opting to study rigorous courses of their choosing at the college level in over 20 subjects taught by College Board certified Como teachers.