A Living Nativity scheduled for Dec. 10 at Bethel Lutheran

(Photos courtesy of Bethel Lutheran Church from their 2015 event)

For the fourth year, the sights and sounds of Bethlehem at the time of Christ’s birth will be re-enacted at a pantomime presented by Bethel Lutheran Church. A Living Nativity will be offered to the congregation and the public Dec. 10 between 6 and 8pm at the church, 670 W. Wheelock Pkwy. 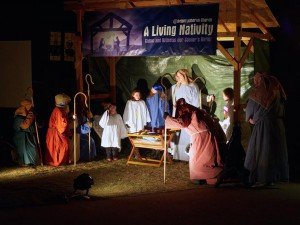 Congregation members will take part in a skit that shows the birth of Jesus. There will also be a Bethlehem Marketplace offering visitors a glimpse of what trades might have been offered in Biblical times.

“We added the Marketplace last year,” said Anna Zimmerman, Director of Discipleship and Outreach at Bethel Lutheran. “We call it the Bethlehem Walk, and that will go on from 5:30-8pm. People will have a chance to experience what it was like in the marketplace.” A Living Nativity was created by Jordan Ray, who held Zimmerman’s position until last year, and the church’s pastor, David Seabaugh. When Zimmerman arrived for last year’s production, she brought along the idea of the Bethlehem Market. “I had seen it in other churches; I saw one in British Columbia,” she noted. “So I presented the idea to our church, and they said yes.” 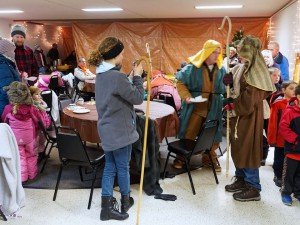 Last year the church’s basement, which holds a large fellowship hall, was also opened to people attending. This gives them an opportunity to sip on coffee or cider or sample some of the 400 cookies baked by women in the congregation.

“That brought in about 100 more people last year,’ Zimmerman noted. “It offered a warm place for people to sit and have fellowship with each other.”

She said the weather has so far not been a problem, but there are always contingency plans. Zimmerman said the congregation brings blankets for extra warmth if needed, and there are bleachers so people do not have to sit or stand in snow. There is also a fire pit for extra heat.

Cravin’ Pies, Belasquez Family Coffee and Bundles of Love, a church charity to help mothers in need, have all participated. Last year there was also a translator, who translated children’s names and spelled them out in Biblical Greek.

Zimmerman said she has also gotten in touch with Concordia Academy, which presents a craft show in November, to have them contact all those participants who might want to offer their crafts during the Living Nativity. 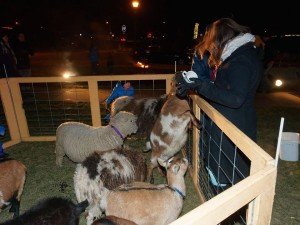 “Bob from Bob’s Cock-a-Doodle Zoo brings live animals for the production,” Zimmerman said. Sheep and goats, as well as other animals, take part in the pantomime. Shows are offered every 15 minutes. When they are over, children can come up and pet all the animals.

Zimmerman said that Seabaugh had written the scripts for the skit each year until this one, since he is leaving to serve a congregation in Illinois. “I reached out, and Jeff Burkart, a professor from Concordia, agreed to write the pantomime. He did a beautiful job,” she said.

The presentation calls for a show team, which includes actors for the skit as well as Roman soldiers who will be announcing the birth to those gathered in the fellowship hall. “Last year we focused on shepherds and angels,” Zimmerman explained. “This year we are focusing more on the Wise Men.” 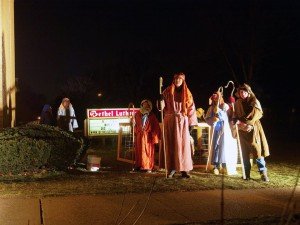 She said that the play always is about the birth of Christ, but looked at from different perspectives.

The show team also includes those who assist with stage managing, costumes and audio/equipment.

“The actors can choose to speak or not speak,” Zimmerman added. “It is a pantomime skit purposely.

So if Little Sally Johnson is afraid to speak, she can just stand and be an angel. All ages participate and attend. It is definitely a family event.”

There is a media team, a hospitality team and a building team. “We take the stable apart and put it up each year,” Zimmerman said. “We will set it up in a few weeks while it is still warm out.” 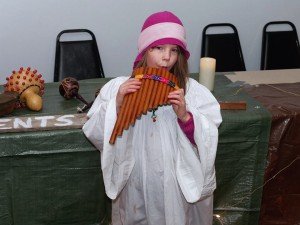 She said the planning for the next year’s Living Nativity starts before the current year’s event is even over. “I started reaching out and brainstorming about two weeks ago.” Then, right after the event, “we look at what went right and what didn’t work. Then I revisit that the next year.”

Zimmerman said that although she coordinates the event, it is totally a church undertaking. She said it involves participation from 75 to 100 people.

But all the work is worth it, according to Zimmerman. “Christmas is so rushed, and so much emphasis is put on gifts and Santa Claus and shopping. But we like to remind the community the reason we celebrate Christmas is that Jesus Christ came and saved us from our sins. That’s why we share the story.”

She said the pantomime is by and for the congregation, but it is also an outreach to the wider community. The public is welcome and encouraged to attend.

“And we always make sure we tell people the story is not over when A Living Nativity ends. They are always welcome to join us for a candlelight worship service on Christmas Eve and Christmas Day, too.”